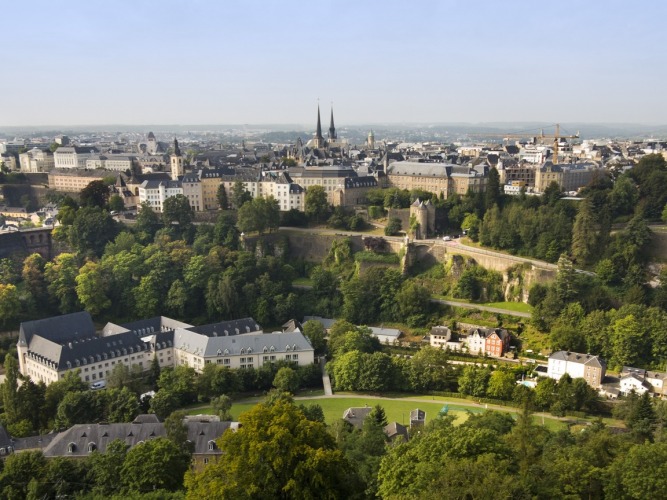 It is a country located in the Benelux, that shares its borders with Belgium, France, and Germany.

And even though Luxembourg is far too small to offer the same benefits as other big European countries, it gives you a completely unique, smaller, confined and intimate feeling typical for smaller countries.

What you’ll find very unique about Luxembourg is the fact that, when you live in Luxembourg, you actually live in four countries at the same time, since it’s such a short distance from Belgium, France or Germany.

Luxembourg is very safe, and many say it is the safest country to visit in Europe. It is economically and politically stable and can offer you an insight into Europe without you having to worry about crime typical for other, more popular European countries.

Taxis and means of transportation in Luxembourg are reliable and safe. You don't even need to negotiate the price of the ride because all taxis use taximeters and they probably won't try to scam you or overcharge you for a ride.

Even though it is so safe, you shouldn't test your luck: watch out for petty crime in tourist landmarks and crowded areas. The crime rate is low, but pickpocketing and bag snatching does happen, even though it is not very common.

Two threats are of main concern for Luxembourg: floods and forest stability. Definitely, nothing to worry about if you're just a tourist, though in case of a flood, follow the instructions of authorities.

Mugging and kidnapping are also very rare in Luxembourg. However, you should exercise caution and remain vigilant for possible dangers.

There haven't been any terrorist attacks in recent Luxembourg's history, but even so, they shouldn't be ruled out, and you should stay vigilant for any strange behavior in your vicinity.

Scams are also not probable in Luxembourg, but it is recommended that you follow common sense all the same, since it is, after all, a city in Europe. Be cautious upon running into strangers acting strange or trying to distract you by tapping you on your shoulder, spilling something on you, or running into you.

Luxembourg is safe for women to travel to. If you are a woman traveler, you should exercise caution and avoid empty, isolated and poorly lit streets and areas, but apart from that, your trip should go smoothly.

So... How Safe Is Luxembourg Really?

Luxembourg is so safe that in many surveys, it has been named “safest country in the world”: basically, what this means is that if you follow usual precautions, you should be totally fine.

One questionable area is the area around the city center station, particularly on the rue de Strasbourg.

One worrisome issue in Luxembourg is the fact that it has very high suicide rates – but, again, it isn’t something that should worry you if you’re just a tourist – only if you’re planning on settling there since the rates are probably that high due to poor job opportunities.

The Gare area of Luxembourg is the least desirable.

By no means could it be described as dangerous, but this area is where you will find the strip clubs and less savory characters, meaning that by the very high standards of Luxembourg’s residents it’s considered horrific.

You may hear once in a while someone catcalling you, but if you speak up, no one will bother you again: it’s very safe for a woman in this country.

If you come to work from another country or live in a place that makes you use the same highways, you will face traffic jams – and a lot of them, so prepare yourself!

How Does Luxembourg Compare?