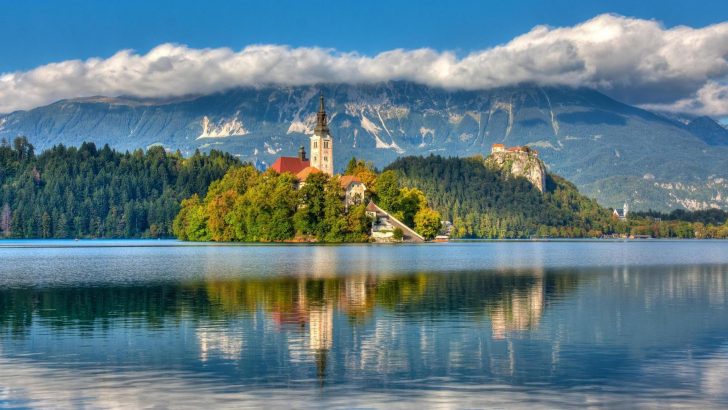 Slovenia (not to be confused with Slovakia) is a country located in South Central Europe in the Julian Alps at the northern end of the Adriatic Sea, bordering Austria to the north, Italy to the west, Hungary to the northeast, and Croatia to the southeast.

It was, for a long time, one of Yugoslavia’s six constituent republics, but Slovenia as it is today Slovenia gained its independence in 1991.

After this, it started transforming into a modern state by developing a strong economy and a stable democracy.

Its history before Yugoslavia is also interesting: in Older Slovene cities you can see at a first glance the baroque (Austrian) influence and Roman (Italian) architectures.

Maybe that’s the reason why the countryside and city architecture in the northwest share many common features with Austria such as baroque shrines and facilities.

It’s also one of the safest countries in Europe.

Overall, Slovenia is a very safe country to travel to. Violent crime is rare and petty theft should be your only concern, so make sure you watch out for the pickpockets and bag snatchers!

Transportation in Slovenia is generally safe and reliable, but it is advised to be careful in public transportation since that's where pickpockets operate. Also, there have been reports of taxi driving ripping off people at airports and railway stations, so negotiate your price before getting in the vehicle, or just avoid taxis that don't have meters.

Pickpockets are an issue in Slovenia, but it shouldn't be too big of a problem if you take precaution measures, such as keeping your valuables in a safe place, not carrying all your money in the same place, and not carrying anything valuable in an easily accessible part of your outfit.

There are no significant threats of natural disasters in Slovenia, except for occasional tremors, since Slovenia is on an earthquake fault line.

Mugging or kidnapping aren't common in Slovenia, but it is still recommendable to avoid poorly lit and deserted areas and to not accept drinks from strange people, although drink spiking is not common either.

Even though there haven't been any terrorist attacks in Slovenia's recent history, these types of attacks shouldn't be ruled out, so be aware of your surroundings at all times.

Traveling alone in Slovenia is very easy for females. The country is incredibly safe and since it's so small, it is very easy to get around. Just avoid poorly lit and deserted areas and walking alone at night, with a few more basic precaution rules and your trip should go smoothly.

So... How Safe Is Slovenia Really?

Slovenia is completely safe to visit, and some even say it’s the safest country in Eastern Europe.

Crime rates are generally low and your biggest concern will be petty theft or bag snatching on the streets.

Violent crime is generally very low and decreasing yet.

Still, as mentioned, the biggest problems for tourists in Slovenia are pickpockets so it is recommended that tourists pay attention when in crowded areas or tourist landmarks, and especially when in public transportation.

Another issue in Slovenia is car break-ins and theft.

If you’re not in a position to park your car in your hotel or a residential garage, then try and park it somewhere where there is plenty of light and pedestrians around at all times.

Try to use anti-theft devices and never leave valuables in a visible part of the car.

Also, you might encounter a problem with local taxi drivers.

Even though in general, most taxi drivers are honest and reliable, there have been reports of taxi drivers ripping off tourists at airports or train stations.

Always negotiate the price before getting in the taxi or make sure you enter in a taxi with a meter.

How Does Slovenia Compare?