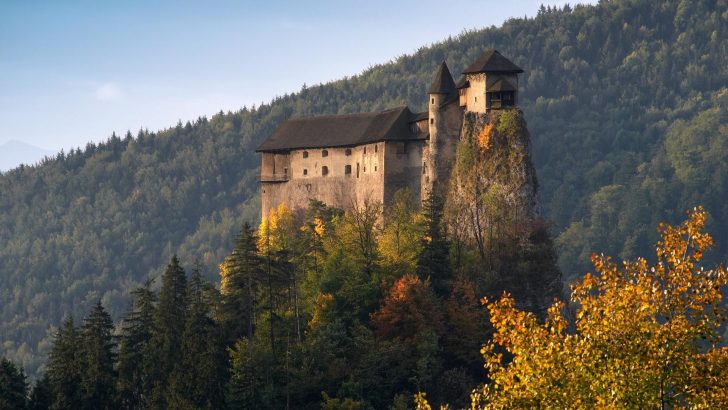 Slovakia or sometimes called the Slovak Republic is a country located in Central Europe, squeezed in between Austria to the west, the Czech Republic to the northwest, Hungary to the south, Poland to the north, and Ukraine to the east.

More than two decades after splitting up of Czechoslovakia, Slovakia grew into an independent nation with a stable country and an abundance of things to see and do.

Though its capital city, Bratislava, is the one getting all the attention because of its unique nightlife, there is much to enjoy in Slovakia’s gingerbread-style villages, which serve as proof of Slovakia’s loyalty to its folk traditions.

Lovers of the outdoors are the ones most attracted to Slovakia.

The High Tatras are made for hiking or winter sports, and castles look even more magical when covered in heavy snow.

Then there are quaint churches in the east of the country, around a friendly city named Košice.

Don’t forget cellar restaurants to sip on some wine and round up your perfect trip in this country at the very heart of Europe.

Overall, Slovakia is very safe to travel to. Its crime rates are very low, and pickpockets are the biggest concern you'll have to deal with while on a holiday there. Have your wits with you and be vigilant at all times.

Road safety is a concern for some tourists traveling to Slovakia, since Slovakia has the eighth-most dangerous roads in Europe, according to the European road safety chart. Be careful when driving, especially after dark. Be wary of taxi drivers trying to overcharge for their services with cheap tricks. Don't fall for them and insist on the meter.

Pickpockets are common, but not as much as in other European countries. You should be careful when it comes to your valuables, keep them safe in your accommodation or at least don't carry them all in one place. Be especially cautious in Bratislava's Old Town, the Christmas markets in December, and on public buses, trams, or trains.

There are no severe threats of natural disasters in Slovakia, apart from occasional flooding.

When it comes to mugging, it is not common, though you should avoid empty, deserted or poorly lit streets, and in such an occasion, hand over your possessions immediately and never resist

Although there haven't been any terrorist attacks in Slovakia's recent history, they shouldn't be ruled out, so be aware of your surroundings at all times.

As in any tourist destination, there is a heightened risk of getting scammed. Check every change twice, negotiate everything beforehand and never give your money before you receive the service you're paying for. In taxis, always insist on the meter and only pay what the meter shows.

Slovakia is, in general, very safe for women traveling solo. Apart from a few precaution rules you should apply in order to minimize your chances of something going wrong, if you avoid poorly lit and deserted streets and follow your common sense, your trip should go smoothly.

So... How Safe Is Slovakia Really?

Slovakia is a safe country to visit.

Crime rates are low, even by European standards and violent crime is almost non-existent.

Pickpockets are definitely a problem, though much less so than in other European countries and top destinations.

Still, bear in mind that they tend to roam around the city and tourist-frequented areas.

There will also be scammers waiting to trick you, so be wary of taxi drivers adding an imaginary surcharge to the metered value, or not running the meter at all and then delivering and astronomical fee at the end.

Always insist on the meter before entering the vehicle.

Also common are car break-ins and you can expect thieves to smash your windows whether or not valuables are in plain sight.

This is why it is always better to keep your valuables at your accommodation or safely by your side.

Always bear in mind that going out at night has its own dangers.

There have been reports of people getting spiked drinks from locals and then waking up a few hours later with empty pockets.

Don’t be paranoid, but try to avoid accepting drinks from strange people or simply insist on going with them to the bar and watching the drinks being made.

How Does Slovakia Compare?