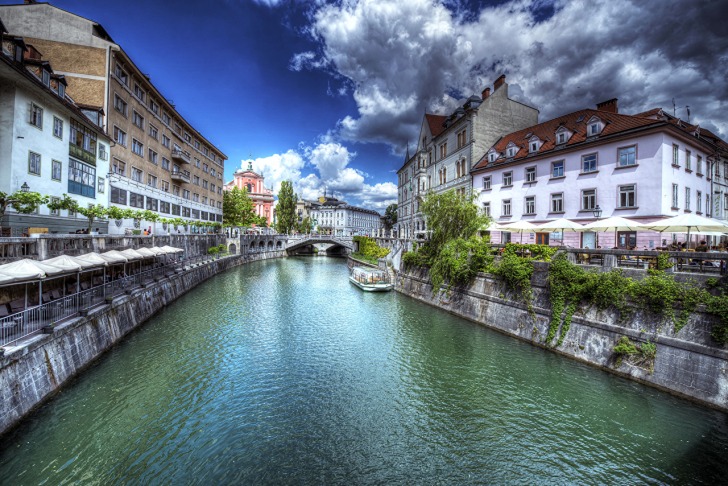 Slovenia - safety as a country

Ljubljana is the capital of Slovenia, a truly charming city full of independent artist shops, museums, and galleries.

It has a population of around 300,000, which makes it one of the smallest capital cities in Europe.

One of the great things about Ljubljana is the fact that it lacks the world-famous attractions typical for European capitals, and here’s why that’s so great: instead of feeling obligated to visit them all – you feel free to stroll around and feel the true spirit of the city.

There’s no need to hectically run from one place to another, taking photos in tourist spots: the city is a tourist spot itself.

Overall, Ljubljana is a very safe city to travel to. Violent crime is rare and petty theft should be your only concern, so make sure you watch out for the pickpockets and bag snatchers!

Transportation in Ljubljana is generally safe and reliable, but it is advised to be careful in public transportation since that's where pickpockets operate. Also, there have been reports of taxi drivers ripping off people at airports and railway stations, so negotiate your price before getting in the vehicle, or just avoid taxis that don't have meters.

Pickpockets are an issue in Ljubljana, but it shouldn't be too big of a problem if you take precaution measures, such as keeping your valuables in a safe place, not carrying all your money in the same place, and not carrying anything valuable in an easily accessible part of your outfit.

There are no significant threats of natural disasters in Ljubljana, except for occasional tremors, since Slovenia is on an earthquake fault line.

Mugging or kidnapping aren't common in the capital of Slovenia, but it is still recommendable to avoid poorly lit and deserted areas and to not accept drinks from strange people, although drink spiking is not common either.

Even though there haven't been any terrorist attacks in Ljubljana's recent history, these types of attacks shouldn't be ruled out, so be aware of your surroundings at all times.

Traveling alone in Ljubljana shouldn't represent a problem for women. The city is incredibly safe and since it's so small, it is very easy to get around. Just avoid poorly lit and deserted areas and walking alone at night, with a few more basic precaution rules and your trip should go smoothly.

So... How Safe Is Ljubljana Really?

Ljubljana is completely safe to visit; some even say it’s the safest capital in Eastern Europe.

The city center is now more or less completely closed for pedestrians and packed with tourists from all over the world.

Crime rates are generally low and your biggest concern will be petty theft or bag snatching on the streets.

Violent crime is generally very low and decreasing yet.

The crime rates, in general, vary depending on the area of the city: Šiška (northwestern side) has 500% more police interventions (police stats 2015) than Bežigrad (northern side) but that doesn’t mean you’re not safe walking around.

Still, as mentioned, the biggest problems for tourists in Ljubljana and all of Slovenia are pickpockets so it is recommended that tourists pay attention when in crowded areas or tourist landmarks and especially when in public transportation.

Also, you might encounter a problem with local taxi drivers.

Even though in general, most taxi drivers are honest and reliable, there have been reports of taxi drivers ripping off tourists at airports or train stations

Another issue in Ljubljana is car break-ins and theft.

If you’re not in a position to park your car in your hotel or a residential garage, then try and park it somewhere where there is plenty of light and pedestrians around at all times.

How Does Ljubljana Compare?