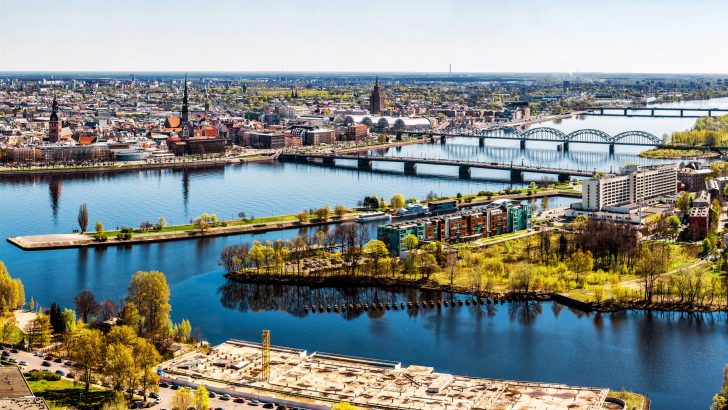 Latvia is a Baltic country located in Northern Europe, bordering Estonia to the north, Lithuania to the south, Russia to the east, Belarus on the southeast, and the Baltic Sea on the west.

It is yet another country boasting a beautiful Baltic Sea coastline, and it is only one of the many gorgeous, mostly natural, features that this country has to offer.

Though the most famous travel spot is Latvia’s capital Riga, which is also a World Heritage Site itself, there are many options in this country for tourists to see and visit.

Latvia offers wonderful landscapes and surroundings, both urban and rural, such as Liepaja with its former secret military town of Karosta and a breathtaking beach.

Among its natural beauties is Kuldiga with Europe’s widest waterfall and as for cultural heritage, there’s Cesis with its medieval castle ruins.

Then there are forests, vast forests covering approximately 50% of Latvia’s territory with many trails, tracks and nature parks.

And of course, topping this all off is the wild beauty of Latvia’s coastline, expanded over 500 km of land and consisting mainly of white, soft sandy beaches.

Latvia is overall safe to travel to, the crime rates are relatively low, and even pickpockets are not that common. However, it is advised that you remain vigilant at all times, especially on the streets.

As in other Baltic countries, traffic is not very safe in Latvia. It is filled with reckless drivers and even crossing the street is dangerous. Some roads are badly kept and riddled with holes. Be very careful when included in Latvia's traffic.

Pickpocketing exists in Latvia but it is not too big of an issue. There are specific areas to watch out for such as Vecriga (Riga's Old Town), Dzelzcela Stacija (central train station), the Autoosta (central bus station) and Centraltirgus (central market) notorious for pickpockets. Be careful and keep your valuables close by your side.

As for natural disasters, there are no greater risks, apart from flooding caused by heavy rains, mostly in the eastern part of the country.

It is not likely you will get mugged or kidnapped in Latvia. Still, don't let your guard down and stay away from dark and deserted areas of bigger cities.

There haven't been any terrorist attacks in Latvia's recent history, but they shouldn't be ruled out, so be aware of your surroundings at all times.

There are several scams performed in Latvia, especially in Riga, and they are mostly connected to bars and pubs. People lured into a pub or a bar by a pretty lady are mostly ridiculously overcharged. This happens in shady pubs such as Kapsula, Babylon and Sonali Pub to name a few. Never accept drinks from strange people or leave your drink unattended.

Overall, Latvia is very safe for women traveling solo. Just use your common sense and have your wits with you. Avoid poorly lit and deserted areas at night and finding yourself in places filled with drunken people.

So... How Safe Is Latvia Really?

Latvia is generally safe to travel to, and petty crime is relatively low although it exists.

Pickpocketing is mostly common in larger cities and some of the most notorious locations for this crime are Vecriga (Riga’s Old Town), Dzelzcela Stacija (central train station), the Autoosta (central bus station) and Centraltirgus (central market).

Another issue to bear in mind is that bicycle theft is also common so make sure to lock your bicycle before walking away, even if it’s the smallest distance from your vehicle.

As other Baltic countries bear in mind that traffic isn’t the safest.

Latvia is filled with reckless drivers and some roads are very unsafe, which is why the accident rate in Latvia is very high.

Be careful when crossing the road and especially mind the forest roads since collisions with wildlife animals can easily occur.

Since half of Latvia’s territory is covered in forests, you should watch out for forest ticks as they can be abundant from May to September, depending on the humidity of the previous year’s weather, and bear in mind that they can occasionally be found even in old town parks.

Their bite carries the risk of tick-borne encephalitis (these infected ticks can be quite common) and Lyme disease which is less common.

If you do get bitten by one, keep in mind that delayed or inadequate treatment can lead to disabilities.

There are also some snakes in Latvia, but they are mostly not venomous, except for the European Adder which carries a possible death threat if you get bitten and not treated within the next couple of hours.

How Does Latvia Compare?