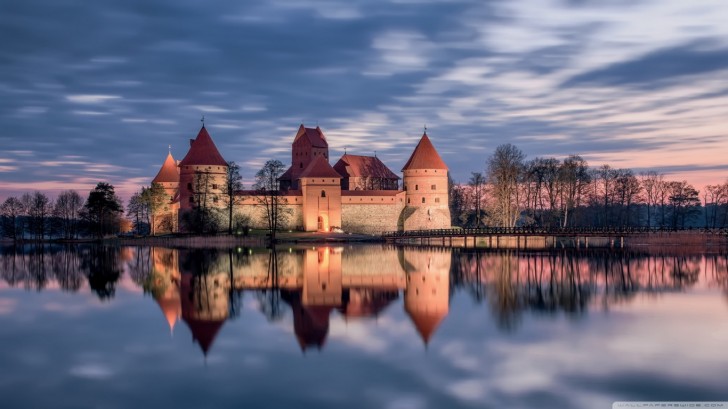 Situated in Northern Europe, Lithuania is a gorgeous country, known for its nature and beautiful forests that cover about 33% of its territory.

People refer to it as a small country squeezed in between giants, as it shares borders with Poland, Russia, Belarus, and Latvia.

Apart from its forests, Lithuania has a sandy coastline with big dunes, some of which face the Baltic Sea, so one could say that it is rich in nature, and since it’s popular for its nightlife and museums, many tourists come to visit from the neighboring countries, as well as Germany and the UK.

Generally, Lithuania is a safe country to travel to. What is interesting about crime rates in Lithuania is the fact that, even though it has a moderate crime rate, there are no dangerous areas, districts, or ghettos that you should avoid, and crime is spread pretty much evenly across the country. What you should keep in mind is to try and avoid areas with many bars and clubs, due to possible encounters with drunk or intoxicated people.

The group of people most known for scamming tourists is taxi drivers. So much so that it is even recommended not to use a taxi as transportation in Lithuania. They are known for charging up to 10 times the real price of the ride. Apart from that, many drivers won't even negotiate - they just refuse to drive out-of-towners for any less money than what they offer.

Pickpocketing is a common risk for tourists in Lithuania, as well as other forms of petty theft, so be sure to keep your valuables in a safe place, do not leave them in plain sight and try to not keep all your money in one place.

Lithuania is completely sheltered from any natural disasters. There are no precaution measures that you should take against occurrences such as earthquakes, floods, hurricanes or tsunamis since no such disasters happen in Lithuania. The only thing notable when it comes to nature and weather are very cold winters and extremely hot summers.

Bag snatching could happen, as well as mugging, even though it is not common, so the only places you should be particularly careful at are crowded public facilities such as railway and bus stations, airports, etc. Apart from that, you should exercise normal security precautions, and in case of mugging, do not resist and give up all belongings immediately.

In the entire Lithuanian history, nobody has been killed or injured in terrorist bombings. It has, however, had deadly incidents originating from its aggressive neighbors (namely, it has suffered occupations and genocides primarily by Russia) but the last act of aggression occurred in 1991, so the chances of foreign invasion are slim.

The most likely annoyance for tourists in Lithuania are people trying to scam you or trick you into paying something or overcharging for their services. These are normal tourist traps, but do watch out for the change when you buy something from local traders selling touristy souvenirs. They are likely to "miscalculate" the change and give you less money than they should.

Lithuania is safe for women who plan on traveling alone. Of course, you should take care of your luggage, personal belongings, and follow basic rules of safety, such as not walking alone at night or mingling along streets that are filled with bars and drunk people, but apart from that, it is generally safe.

So... How Safe Is Lithuania Really?

When it comes to safety, many claims that countries in the eastern part of Europe are much safer than popular European destinations such as Paris or London.

It is known as a relatively safe place to visit, with a low crime rate.

However, there are places that you should avoid because the risk is slightly higher.

Actually, in Vilnius, the capital city, the authorities publish lists containing the names of clubs and other locations that have been reported for the highest crime rate.

Many have even reported Lithuania as highly civilized compared to other countries nearby such as Russia, Bulgaria, or Romania since not many unpleasant situations can happen apart from an occasional scam or pickpocketing.

While Lithuania is overall safe, it is important that you are well informed about the crime that does happen on the streets there (mainly petty thefts, pickpocketing, or other types of rip-offs and scams) so that you are always prepared for any unwelcome situations that you may encounter.

Using your common sense and taking basic precaution measures should be enough to make your trip pleasant.

How Does Lithuania Compare?