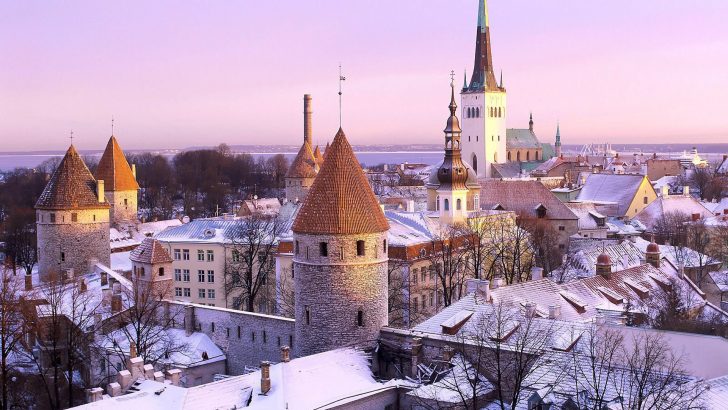 Estonia is a Baltic state located in Northern Europe sharing borders with both Latvia and Russia.

Estonia’s coastline lies on the Baltic sea and the Gulf of Finland, and what Estonia offers to its visitors is the chance to experience a dynamic little country right on the shores of the Baltic Sea, though tourists should keep in mind that the swimming season in this country isn’t very long.

In turn, winters in Estonia are harsh and severe.

Apart from its exciting coastline that gives that extra charm to this Baltic country, Estonia boasts wonderful medieval remains, such as Tallinn’s medieval old town that was built by German crusaders in the Middle Ages and is, to this day, kept in great condition, with the medieval city walls and towers intact.

It is actually, according to many, one of Europe’s best-preserved medieval towns.

Estonia offers an in-depth look into its history, with traces of the Soviet era that are still there to be seen, such as Paldiski, a deserted Soviet army base that was once off-limits to Estonians themselves.

Estonia is, for the most part, a safe country to visit. Its crime rates are relatively low, but it is advised to remain vigilant at all times, keep your valuables in a safe place and be very careful when involved in traffic.

Transportation is a major issue in Estonia, due to many reckless drivers. There is a worrying number of deaths due to traffic accidents per year, and you should be very careful when venturing into Estonia's traffic. Also, weather conditions and potholes can cause problems on roadways, both in cities and smaller towns and villages. Always have your headlights on.You should also avoid hailing taxis directly from the street, since these taxi drivers can overcharge you for their services. Your best bet is to arrange a ride with a taxi company such as Tulika Takso.

Petty crime exists in Estonia, especially in Viru street in Tallinn and areas like Tallinn's Old Town, especially the Town Hall Square, called Raekoja Plats and the Central Market. Never let your guard down and never leave your valuables in plain sight.

There are no threats of natural disasters in Estonia, apart from occasional flooding and storms.

There have been reports of foreigners being mugged or attacked by drunken people near bars and clubs. The most dangerous places at night are the neighborhoods Kopli and Lasnamäe, though crime here is still less of an issue than in other larger countries like America.

Even though there haven't been any terrorist attacks in Estonia's recent history, they shouldn't be ruled out, so be aware of your surroundings at all times.

Estonia is a country where you could get scammed, so you should check your change twice and never let your credit card out of site. Be wary of people trying to distract you offering you unwanted help, since it might be a trick to steal from you.

Estonia is generally safe for women traveling solo. Just follow the rules of common sense such as avoiding deserted and poorly lit streets and areas, and your trip should go smoothly.

So... How Safe Is Estonia Really?

Estonia is pretty safe to travel to.

Its crime rates are mostly low, and though there are areas to avoid, pickpockets, mugging or other types of assault are not common.

However, the capital city of Tallinn can get a bit dangerous, like any other major city.

You can expect very low prices of alcohol and with that many roaming groups and bands of drunken or intoxicated men causing fights and initiating verbal assaults.

With this, there is also the risk of getting ripped off in the strip clubs along Viru Street and other local bars run by shady, organized crime gangs.

Be prepared for astronomical entry fees or bar tabs at such places, just because you are a tourist.

However, maybe the most serious problem in Estonia, when it comes to safety, is the recklessness during driving.

In this country, there are about 80-110 people killed and 1300 people injured per year.

Even though Estonia has strict drink-driving laws, accidents caused by intoxicated drivers still happen and represent a major problem.

This is why Estonia has adopted many new laws concerning traffic safety, such as using a headlight at all times while driving and mandatory use of seatbelts by all passengers.

It has also enforced a new law, most important in rural areas, that requires pedestrians to wear small reflectors, generally pinned to their coats or handbags.

How Does Estonia Compare?