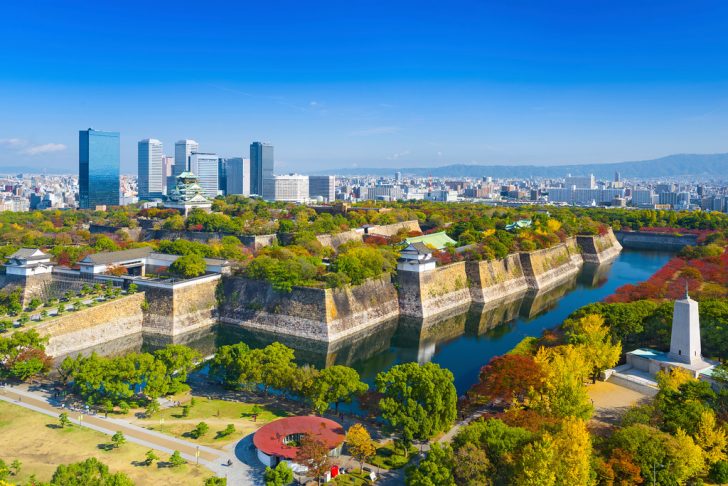 Osaka is a huge city where you can go sightseeing, enjoy delicious food in many restaurants, experience vivid nightlife.

It is the third-largest city in Japan, with a population of over 2.5 million people and very many tourists.

They are often attracted by the list of reasons including history, culture, and business.

Osaka was briefly the capital of Japan and later continued to play an important role as a hub for Japan.

With its carnival-like ambiance, numerous adorable and cheap cafes and souvenir shops, Osaka is a city with extraordinary places that should be on your travel agenda.

Osaka, as the majority of Japanese cities, is very safe and it is among the safest cities in the world. The overall crime risk is very low.

Taxis in Osaka are safe and you can be sure that the taxi drivers will not try to take advantage of you. In case you want to drive in Japan, you must hold an International Driving Permit and must carry your driving license with you at all times. There is some pickpocket risk in public transport, but not too often.

Due to a large number of citizens and the greater number of tourists, Osaka is prone to pickpocketing. It is safe to walk about at night and to travel on public transport as long as you remain watchful and vigilant. The aim of thieves is usually money and your passport, so if it is lost or stolen, you should report this at a police station and get a police report.

Osaka region is very prone to natural disasters and the risk of tsunamis, earthquakes, and floods exist all the time. The Japan Meteorological Agency website always shows the latest updated information about the possible natural hazards to warn people.

Mugging and kidnapping rarely happen in Osaka and the risk level is low. However, some areas are best to be avoided at night, since some personal attacks, including sexual assault and rape, sometimes happen.

Even though the Japanese government undertakes various measures for preventing terrorist activity, it cannot be predicted, nor avoided. The attacks did not occur in the recent history of Japan, but you should be aware of the global risk. Terrorist attacks usually occur in public areas, so remain extremely watchful of any suspicious activity around you.

Be aware of homeless people, follow safety precautions and try to avoid suspiciously looking people. Drink spiking with much higher levels of alcohol is common with the aim of robbing the victim and taking his/her credit card. So you should never accept drinks from strangers and do not leave it unattended for some time.

The women's safety risk is low and most visits are trouble-free, but women should still avoid walking alone at night.

So... How Safe Is Osaka Really?

As in any huge city, there are districts to be avoided, particularly Shinsekai and Tobita and the Airin/Kamagasaki area, while there are areas that are completely safe and frequently visited by tourists such as Osaka Castle, Universal Studios Japan, and the Floating Garden.

There are a few things to keep in mind about transportation in Osaka, where some pickpockets might operate and visitors should stay aware of local dangers such as natural hazards and drink spiking.

According to the Japanese people, Osaka is considered a dangerous city.

Nevertheless, the fact that the overall level of crime is as low, foreign travelers will certainly find it less dangerous than many European or U.S cities of that size.

How Does Osaka Compare?