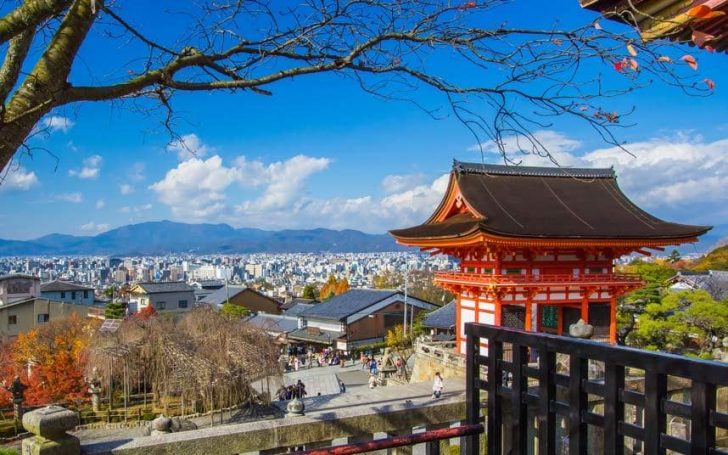 Kyoto was the capital of Japan before it was moved to Tokyo.

It was the center of Japanese power, culture, tradition, and religion.

Because it is one of the rare cities that has not been bombed during World War II, Kyoto has prewar buildings, which attract tourists.

Nowadays it is a very touristic spot, because of hotels, shops, restaurants, and department stores.

Besides being a very safe city, it also has a reputation as the most beautiful city in Japan.

Kyoto’s hidden beauty is in the temples and parks around the city center.

Central Kyoto is the heart of the city with main shopping and nightlife districts, as well as Nijo Castle, which is the UNESCO World Heritage site.

Kyoto is considered the safest city in Japan since the crime levels are very low. It is one of the very few cities that is safe to walk at night and to travel on public transport, but sensible precautions are necessary, as in any other major city.

It is a very rare situation that taxis are a safe mode of transport in such a huge city, but this is the case in Kyoto. Pickpockets might operate in public transport. Unlike other Japanese cities, a tourist is advised to use the buses here. You can drive in Kyoto but must carry your driving license with you at all times. Driving is on the left, and you should pay particular attention to pedestrians crossing roads at green lights or cyclists traveling on the pavements or the wrong side of the road and without lights at night.

Just as in any other tourist place, the flow of tourists attracts pickpockets. Foreigners can be targeted by criminals, especially in bars and nightclubs, due to the money they have on them. The incidents of bag snatching have occurred.

Natural disasters risk is very high in Kyoto, and there are risks of earthquakes and tsunamis. There is even a note with instructions in hotel rooms, in case of risky situations. Several active volcanoes and the risk of tropical cyclones exists. Bear in mind that the tropical cyclone season lasts from June to December.

Mugging and kidnapping risks are not common in Kyoto, since personal attacks, including sexual assault and rape, are rare, but bear in mind that they might happen.

There have not been reports of terrorism in the recent history of Japan, but the attacks could happen in public areas, including those frequented by foreigners, so you should be vigilant wherever you find in the world.

There are no reported scams, except some drink spiking, after which the victims woke up to find out that a large amount of money has been billed to their credit card. So, do not accept drinks or food from strangers and avoid talking to them in bars or at night.

Kyoto is not a dangerous city for women travelers since there have not been cases of sexual assaults against female tourists.

So... How Safe Is Kyoto Really?

Being the former capital of Japan, Kyoto is one of the most popular tourist destinations, which attracts both foreign tourists and the Japanese as well.

The preserved atmosphere of ancient Japan, with many ancient temples, former imperial palaces, and castles makes it a perfect holiday destination.

Kyoto is generally a safe place for both male and female tourists, but it is still advisable to use common sense and keep an eye on your belongings when you are in Kyoto, since the streets are known for a lot of tourist flow, also attract thieves.

There have been reports of night clubs targeting foreigners for overcharging, drink spiking and assault, but that rarely happens.

As long as you do not accept food or drinks from strangers, monitor your belongings and avoid carrying large amounts of cash with you, you will enjoy your stay without any trouble.

How Does Kyoto Compare?