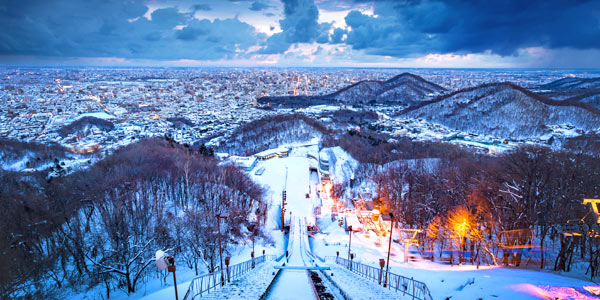 Sapporo is probably best known as the capital of Hokkaido, Japan’s northernmost island.

The reason why it attracts so many international visitors is the annual Snow Festival.

The city has a population of around 2 million people, but still, there are so many parks and beautiful countryside where both residents and tourists will be able to enjoy their own space.

Those interested in art should not miss the Hokkaido Museum of Modern Art.

Sapporo is definitely considered one of the safest cities in the world, according to the safety score which is above 90. Travelers would feel safe there and can enjoy their journey.

In the majority of cases, nothing bad happened on public transport in Sapporo, even though many people travel by it. You just need to be vigilant and watchful of your belongings so as not to be robbed there.

You should keep purses and packages close to your arms and body, being that pickpockets operate on crowded streets and in front of landmarks. You have to be aware of people around you.

Earthquakes can have a huge impact on towns and cities in Japan, as well as tsunamis and volcanoes. In case of emergency, you should follow the advice of the authorities and act accordingly.

Some travelers have reported extortion and robbery but this is not something that happens frequently in Sapporo. Most travelers spend their holidays without experiencing any kind of threat.

Even though there have been reports of foreign nationals being targeted for drink-spiking followed by sexual assault in clubs and bars, these occurrences are quite rare in Sapporo.

There were instanced of female passengers on commuter trains being touched or offended, but this is not common. The majority of females feel fully free while in Sapporo.

So... How Safe Is Sapporo Really?

When it comes to natural disasters, there is a continuous risk of earthquakes, volcanic eruptions, and tsunamis throughout Japan so tourists should get informed about the current situation when the place they are traveling to is in question and in case of emergency, act wisely and follow the advice of the authorities.

Even though Sapporo is not a dangerous city for tourists, you need to walk with confidence on the street and keep your head up while observing your surroundings.

Travelers are suggested to avoid doing anything that can distract them from being aware of your surroundings and who may be approaching them.

We can say that being mugged and attacked using a gun is not something that might happen to a tourist in Sapporo, but still, there are chances that this occurs.

In that case, you should not resist, and the best action that you can do is to hand over money and other belongings they demand from you.

Any confrontation is potentially dangerous and your life is more important than your possessions.

All in all, Sapporo is the place where travelers might feel free of trouble and walk the streets without worrying about being assaulted.

How Does Sapporo Compare?