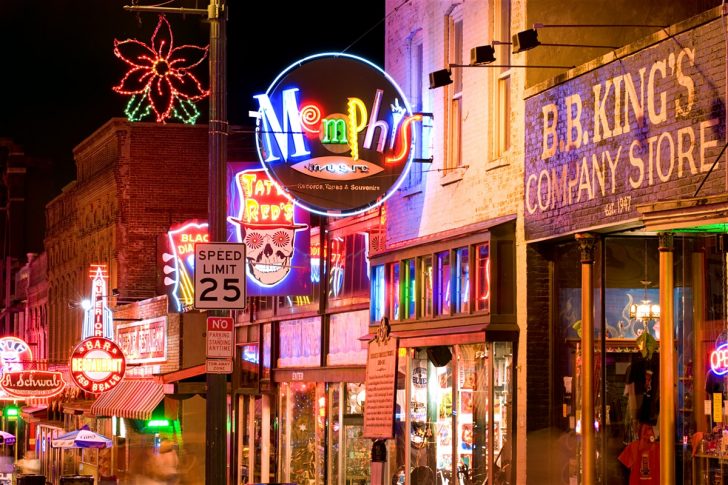 Memphis, a huge metropolitan area resting in the southeastern part of the United States, is the second-largest city in the state of Tennessee.

What tourists rush to see as soon as they get to Memphis, is Graceland, the mansion Elvis Presley lived in during his later years.

More important than that is the fact that Memphis is considered to be the cradle of blues music.

What’s unique about this city is that it has kept its vintage charm of a city that’s been through a lot, yet developed a new style, a mix of old and new which brings a new feel to it.

It’s continually renewing and developing yet never abandoning its roots and initial charm.

For example, neighborhoods of Beale Street and Mud Island are now relatively safe, and citizens are trying their best to make downtown Memphis safe again.

It is turning into a city where you can unwind and have a good time after years of abandonment.

Memphis isn't the safest city though it's slowly regaining some safety on its streets. It has some extremely dangerous areas that should be avoided. You are advised to remain vigilant around tourist landmarks, since pickpockets are an issue there, and keep an eye out for suspicious activities wherever you go.

Trolleys and taxis are considered safe in Memphis, and they operate in the downtown area. However, if you want to visit more than downtown Memphis, traveling by car is your best bet. Also, there is a bus service provided by the Memphis Area Transit Authority (MATA) that will drive you across the city. Just be careful at night and during weekends, as the routes tend to change, so remain informed so you don't end up far from your wanted destination.

The most common types of petty crime are pick-pocketing, purse-snatching, car break-ins and car thefts. Apply common sense like holding your purses tightly and being wise when carrying them, keeping wallets in front pockets, and being alert to one's surroundings. This should be enough to prevent these incidents.

When it comes to natural disasters in Memphis, the most dangerous threats come from occasional earthquakes, hurricanes, and tornadoes.

When it comes to chances of being mugged or kidnapped, they are moderate in Memphis, as long as you don't wander off into dangerous areas. Stick to the main streets and avoid suspicious areas and neighborhoods, or getting in altercations with individuals that appear to be gang members.

Memphis hasn't been the target of any terrorist attacks recently, but possible attacks shouldn't be ruled out. Be aware of your surroundings at all times.

Just like in other tourist destinations, there will be people trying to scam you in Memphis, too. Be wary of anyone trying to distract you, flashing large signs in front of you or ATMs that look like they've been tampered with.

The city of Memphis isn't the safest option for women to travel to unaccompanied. You should avoid dangerous neighborhoods (and this doesn't only apply to women). Just follow your basic common sense and general rules of things to avoid, like poorly lit streets and deserted areas and you should be fine.

So... How Safe Is Memphis Really?

As for safety, while some parts of Memphis have regained safety like Beale Street, it is still not too safe for tourists in Memphis.

Crime rates are generally higher throughout the city than in other cities in its vicinity.

In 2015, Memphis was ranked the 3rd most dangerous city in America which says enough about the current situation which is probably – well, not great still.

There are many areas and neighborhoods in Memphis where walking at night should be avoided or at least conducted with caution and accompanied by someone.

These areas are in North and South Memphis, and they have very high rates of crime.

Never leave any valuables in plain sight in your car and remain informed on where you shouldn’t be going, especially at night.

It is so likely, that there are signs throughout the city asking you not to give them anything.

If you feel inclined to do so, however, never take out your wallet, as they might grab it.

Instead, give them loose change.

How Does Memphis Compare?