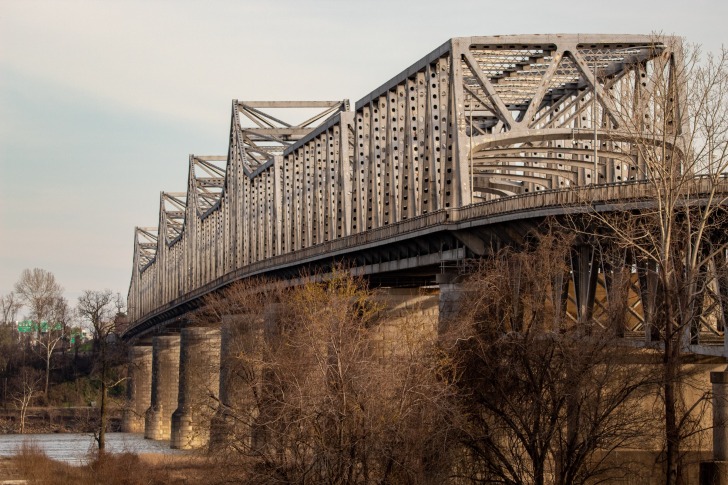 West Memphis, Arkansas, sits on the banks of the Mississippi River, just across the bridge from Memphis, Tennessee.

It’s so close you can smell the barbecue in the air and if you listen closely, maybe some blue music will drift over the murky waters.

West Memphis gained global attention through the brutal murder of three young boys and the three young men convicted of the crime.

The suspects became known as the West Memphis Three.

Several documentaries were made on the case and the reputation of West Memphis took yet another hit.

This is a rather poor, rundown community with a nearly 27% poverty rate.

It’s a diverse community with 60% African American, 35% Caucasian, and 4% a mix of two or more races.

In the past decade, the city has gotten smaller by more than 2,000 people leaving the population dropping to 26,000.

The one thing West Memphis has going for it is the great location, right where I-40 and I-55 intersect, making it a big town for trucking and truck stops and earning the nickname “The Crossroads of America.”

The reality is, West Memphis is one of the most dangerous cities in Arkansas and has been for many years.

I lived in Memphis about 20 years ago and we always rooted for West Memphis to clean itself up.

However, the cities on both sides of the river struggle with crime rates in their own ways.

There's a high overall risk. The violent crime rate equals a 1 in 40 chance of being a victim. People unfamiliar with the area might be lured by the low hotel prices across the bridge from Memphis, but it's not worth saving a few dollars for the risks that come with it here.

West Memphis is working to get a transit service in place since the contract with the previous provider expired. As of March 2022, that project is still under construction. There are taxis available and rideshares, but I'd be extra cautious if I were you. Wait for the ride inside a safe building, or spend the money to rent a car. It's a medium risk when dealing with sharing a ride in West Memphis.

There were only two pickpockets in 2020, but that's still not going to prevent the medium risk that exists. The criminal vibe of this town is that people would rather just take something from you by force than try to sneak it out. Don't wander around this town day or night alone. I wouldn't even do it in a group.

There's a medium risk here. Tornados in the spring and ice storms in the winter make the entire year have some kind of weather risk. With so many semi-trucks passing through this town, you don't want to drive around them in heavy rain or when there's ice on the ground. West Memphis went through weather hell in 1987 when a tornado ripped through town in mid-December. 12 days later, a large amount of rain fell, causing massive flooding among the tornado wreckage. The new year rang in and shortly after, up to 10 inches of snow hit the area, adding to the flooding as the snow melted. This town cannot catch a break.

There were six robberies in public in 2020. Here's how the crimes are calculated though, to give you a better idea. If someone tries to rob you and you fight back, the thief might get violent, making it an assault instead of a robbery. On top of that, there's a high drug use rate here. One in 25 people in this town was charged with some kind of drug crime in 2020. People who use drugs are desperate to get money and they might not be mentally healthy. There's a high risk in West Memphis because of the risks that exist just from being anywhere in the city limits.

There's a low risk here. The people of the town are much more dangerous than a terrorist might be in reality. Being so close to Memphis might raise the risk since there's such a high population, but no terrorist group is going to target West Memphis.

There were 272 frauds in West Memphis in 2020. Most of them came from a criminal impersonating someone else. Don't ever fall for any scam that involves gift cards or lottery tickets. There's a medium risk in West Memphis.

There's a high risk for women here. I was a 20-something when I lived in Memphis and I would never go over the bridge into Arkansas without a full tank of gas. I worked at a local news station there and we wouldn't send female reporters into that city alone. There's just too much crime and women can be too easily targeted, no matter how tough they are. 31 rapes were reported in 2020 as well, making it four times the national average.

There's a low risk in tap water. The utility company has no violations and passes all state and federal standards.

The only place to even consider visiting in West Memphis is the Southland Casino Racing.

The greyhound racing part of this complex has been running off and on since 1956.

It’s getting a hotel and large casino added on with a spring 2022 opening date expected for the casino.

For any other attractions, cross the river to Memphis.

You’ve got historic Beale Street with blues music coming from a variety of bars and restaurants.

My particular favorite was Silky O’Sullivans, where you could feed beer to goats in the garden outback.

Graceland is one of the biggest tourist attractions in Memphis and you can walk through the home, the gardens, and the Presley family gravesites.

The National Civil Rights Museum is a humbling experience as you see the very spot where Dr. Martin Luther King, Junior, was standing when he was assassinated.

Inside the museum, you can learn about the civil rights movement and the progress we’ve made as a country and the additional progress still to be accomplished as we chase Doctor King’s dream.

Stax Museum celebrates the gospel music that led to the music of a new generation and broke color barriers in a divided country during the mid-1900s.

You can see musical memoirs and even dance to some Stax music.

Places to Avoid in West Memphis

Unless you are visiting family or friends in the city, I would suggest avoiding all of West Memphis and treating it as just a way to get to Memphis.

Crime maps show the southeast area of West Memphis has the highest crime rates and then looking at the Marion, Arkansas, crime rates, the northwest side of town is the most dangerous.

Pay special attention to the area along I-55 in West Memphis.

A lot of crimes are reported there as well.

Avoid going to West Memphis at night at all costs.

Even if you’re a law-abiding citizen, you don’t want to get caught up in a drug deal or violent act.

So... How Safe Is West Memphis Really?

It’s not safe at all.

There’s a one in 40 chance of being a victim of a violent crime.

That’s among the highest rates I’ve seen in hundreds of articles I’ve written about travel.

It’s one thing to have a high theft rate (which it also does – 1 in 28), but you can replace stolen stuff.

Getting hurt and possibly killed?

It’s just not worth the risk.

There were seven homicides in 2020.

That was a pandemic year and a lot was locked down.

The national average for homicide nationwide is 6 per 100,000.

There’s also that drug problem I told you about.

In March of 2022, a nationwide federal sting called “Money Don’t Sleep” ended with 22 people from West Arkansas being arrested on drug charges.

A new mayor was elected in 2019 who spent 16 years serving on the city council, and he’s making some good changes.

Here’s hoping he can clean up the mess of West Memphis and make it a place that is safer to visit than it currently is.

How Does West Memphis Compare?