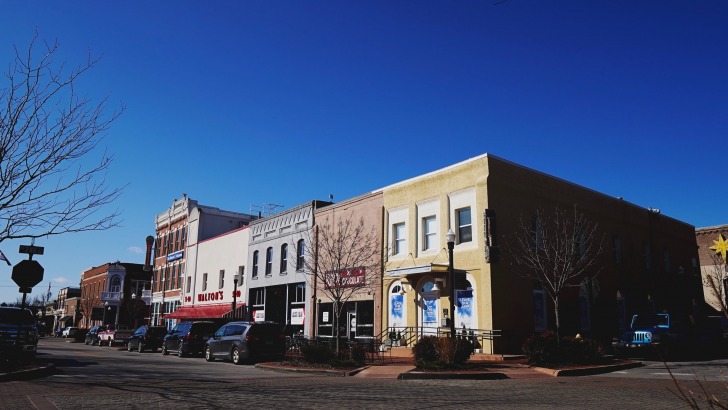 I hope they have room for you in Bentonville, Arkansas when you visit because this city is growing at an astounding rate.

In the past decade, the city’s size has almost doubled.

It’s the home of Walmart, the largest global retailer.

This popular surge has brought so many great things for tourists to see and do, and it’s more of a sophisticated town that you might realize at face value.

There’s still the amazing adventure promised by the nickname of “The Natural State”, but this city caters to the “indoors” people as well.

The elegant downtown area isn’t just for entertainment, there’s a section of it dedicated to fighting poverty across the world.

You could tour several museums and not have to pay a single penny out of pocket.

The crime rate is low and community pride is high.

More than 130 trails help visitors and locals get around, as the roads weren’t really equipped to handle the 54,000 people who now live here.

While it’s a massive distribution city, you don’t feel like you’re in an industrial park region when you tour Bentonville.

You feel strangely at home even if you’re from the other side of the world.

This is a really safe community and you've got a low risk from just about any angle you look at here. We've got one area of concern and it's one that humans can't control.

Ozark Regional Transit is the public transportation system here. Taxis and rideshares are plentiful. There's low risk with any option.

There's low risk with just two purse snatching reported in the past five years. No pickpockets were reported in that same time frame. It's a safe town, but don't let your guard down.

There's a medium risk here as Bentonville and surrounding communities can get really dangerous weather throughout the year. Spring is the typical "Tornado Season", starting in March through May, but tornadoes can happen anytime during the summer and fall too. Late November is a secondary storm season. Winter can bring ice storms, crippling any traffic and travel in the region. The Benton County Emergency Management page has good information for anyone worried about storm safety.

Robbery just doesn't seem to be a "thing" in Bentonville. Crime statistics show there haven't been more than 10 robberies in a year dating back to 2010. There's a low risk.

While I don't think Walmart is on the top 5 list of American locations terrorists might like to attack, I'm sure it is on a list somewhere, so there's medium risk. It's not just Walmart here, but a lot of the vendors that provide products to Walmart are located here too (hence the population boom).

There were 765 reports of fraud in 2020, but they mainly focused on calling local people's landlines or cell phones demanding money to get rid of a false warrant. One thing to watch out for — is someone ever asking you to buy a gift card to pay off a reported debt. This is a sure sign of a scam and you should report it to the police.

Women should feel safe traveling here with crime rates lower than the national and state average. There were 53 cases of some type of sexual assault, so that's one area to pay attention to, as that's more than twice the national average. There's a low risk, but don't get into a situation where you're alone at night or too intoxicated to make your own decisions. Also, never take a drink you didn't see opened or poured.

The 2020 Annual Water Quality Report states, "In 2020, we again met every federal and state drinking water standard at a time when clean drinking water was more important than ever. I am happy to let you know that BWU did not have a single failed sample in the previous calendar year." There's a low risk of using the tap water here.

Safest Places to Visit in Bentonville

In honor of Sam Walton, let’s start our safe place tour at the Walmart Museum downtown.

This is a free attraction that takes you that was actually the first store of the Walmart legacy.

There’s a really funny wall inside of returned items with things such as a thermometer that failed to tell time.

Mr. Walton believed the customer was always right, so he took the return.

You finish the tour in an old-school soda shop where you can buy an ice cream cone or snacks.

The Crystal Bridges Museum of Modern Art is another free attraction filled with amazing displays by a variety of artists.

There is usually a traveling show that can charge for admission, but the bulk of the museum is open to anyone free of charge.

The exterior of the museum is a piece of art itself.

Compton Gardens and Arboretum is a wilderness escape in the downtown area that is just as beautiful in fall when the leaves change to spring when the blooming scents fill the air.

Remedy Road downtown is a unique place where all proceeds go to help poverty.

There are clothing, gifts, jewelry, and shoes all designed for a greater purpose.

The rest of downtown is filled with shopping and dining options.

Take a stroll through the 8th Street Market and see local food artisans show off their work.

Show up hungry, because you’ll have a lot of options.

This district was designed for community interaction, so you can feel safe asking locals for their suggestions of the best foods to try or places to go.

Places to Avoid in Bentonville

Looking at the mapping of the 2020 crimes, the area northwest of Central and A Street had the highest crime volume, which is just outside the downtown districts discussed above.

Also, east of A Street and south of 8th Street has another rash of criminal activity.

You can still buy drinks at some restaurants, but you won’t be able to pick up a bottle of wine.

If you want to purchase alcohol, you’ll have to do it any other day of the week.

That is the bread and butter of this town and globally brings in enough money to shut down any jokes about it.

You might have opinions on health care or worker pay, but just keep it to yourself here.

14,000 people here work for Wal-Mart headquarters and thousands more work for the companies that supply goods to Wal-Mart.

Safety Tips for Traveling to Bentonville

So... How Safe Is Bentonville Really?

One thing I enjoyed about researching safety in Arkansas is that the state Department of Public Safety really details crimes more so than in some other states.

You also get some of the crime details you don’t normally get in the general FBI Uniform Crime Report.

Here’s a list of the number of certain crimes that happened in Bentonville in 2020:

The city of Bentonville has only had five homicides since 2010.

The average income in this city is $84,000, which is much higher than other Northwest Arkansas cities.

I’ve written some articles in this region where the income was half that.

This is really a safe city if you’re practicing the standard safety rules.

How Does Bentonville Compare?