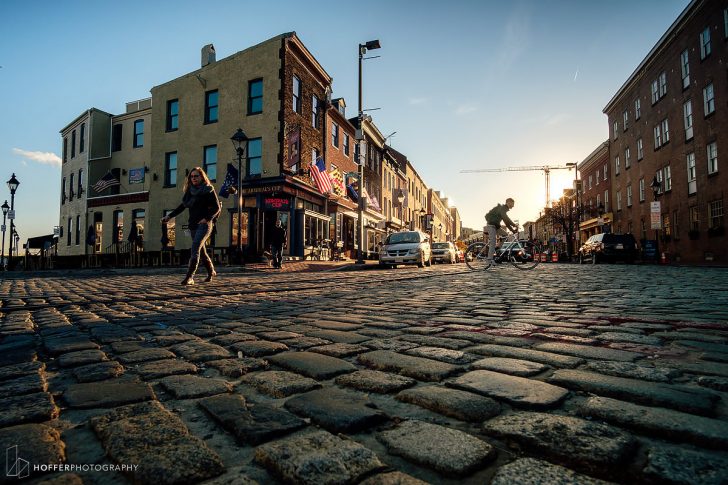 One of three things might come to mind when you think of Baltimore, Maryland – Charm, Crabcakes, or Crime.

All three play a role in the vibrant yet gritty city just an hour northeast of Washington, D.C.

The 1900s were not an easy century for Baltimore, starting in 1904 when a tossed cigarette, still lit, set off an inferno that lasted a day-and-a-half, burning down 80 blocks of the city.

The city was rebuilt, only to face protests triggered by racial injustices and growth practices that disenfranchised the growing African-American community.

Manufacturing and transportation ups and downs led to successes and rock bottom moments that made financial heads spin.

What is generally missed in the stories of Baltimore are the very things that led to the nickname “Charm City” in the late 1960s.

It was changing the dialogue of the city’s negative reputation into a promotional tour of hidden gems throughout the growing city and suburban areas.

Baltimore has easy access to the beach, water activities, major urban adventures, and some of the best crab cakes you’ll ever taste.

Harbor views abound, and the tenacity of this town to overcome its past and build its future is admirable.

The Downtown and Inner Harbor areas are where most tourists go or at least start, but there are various neighborhoods and cultures to explore here.

You can take tours on foot, by car, bus, or boat.

Whether you’re looking for luxury, laid-back, or Little Italy, you won’t run out of things to do.

There's a high overall risk with a trend of rising violent crime that just keeps going up into the 2022 monthly crime data. It's important to know the safer areas vs. the neighborhoods to avoid, and with a city losing population while increasing violent crime, those areas can quickly change. We're going to focus on the safest places to visit.

Baltimore has a bus, light rail, subway, and train system through the Maryland Transit Administration (MTA). Taxis and rideshares will be easy to find, and rental cars are available. There's a medium risk on public transportation, and the MTA police department has a number of safety tips that involve not using any mobile devices on platforms or on vehicles, along with ways to make your stolen property easier to recover or track. Car break-ins make up half of the thefts here, so getting a rental car could put you at a higher risk of theft but a lower risk of violent crime on public transportation. However you travel, use an overabundance of caution.

There's a medium risk here, too, with hundreds of pickpockets happening each year. You should be especially alert in a crowd of people or when changing scenery, like walking out of a museum or off the light rail.

Baltimore gets a mixed bag of weather threats, but the biggest two are flooding and hurricanes. Severe thunderstorms and winter weather are common but not usually life-threatening. If a hurricane is headed toward the region, the risk is high, and you should avoid visiting the city.

There's a high risk here, with one in 187 risk of being a robbery victim. Be sure you don't stand out wearing valuables or carrying expensive electronics. Avoid using public ATMs, and don't give money to panhandlers on the street.

Due to the proximity to Washington, D.C., the population size in this part of the country and Baltimore itself, and the military presence here, there's medium risk. Certain events or overseas activities could raise that risk to a high level, but Homeland Security, the Secret Service, and the military are all using extra protection and diversion tactics to keep this area safe.

You just shouldn't trust anyone you meet in Baltimore. Even asking a seemingly nice person to take your photo could lead to your phone being stolen. A new scam involves someone borrowing your phone to text a family member, only they get into your bank app and send money to their own account. There's a medium risk, and it's smart to realize if scammers don't get what they want by manipulations, they might take it by force. Don't bring your visa, social security card, or any sensitive documents you don't need while walking around.

Women should proceed with a medium risk during the day and a high risk at night. Much of the safety concern revolves around staying out of certain neighborhoods, but that doesn't mean you can't be a victim of a crime in the so-called "safer" neighborhoods. Again, an overabundance of caution, without paranoia, is the best way to enjoy a trip here. Don't travel alone around the city.

The 2021 Water Quality Report shows all standards were met or exceeded. Flooding and hurricanes can always compromise the water quality, but the city will quickly warn residents and visitors on social media if that happens. For example, as of this publication date in September of 2022, there is a boil order for water in West Baltimore where E. coli and coliform have contaminated the water.

Safest Places to Visit in Baltimore

Staying in the neighborhoods where many of the 24 million tourists each year visit will give you a stronger police presence and a better sense of safety.

The Inner Harbor is a must-see location in the city.

This is where the National Aquarium, the U.S.S. Constellation, Maryland Science Center, and Port Discovery Children’s Museum are located.

On the water, you rent a dragon boat or take a ride on the Cruises of the Bay.

If you see a pirate ship, consider one of the family adventure cruises, or if you’ve got deep pockets, you can charter the boat just for your group.

There is also a water taxi to get around if you prefer to stay off the streets.

It will take you directly to dozens of attractions and neighborhoods in the region and save you a lot of drive time and parking fees.

This area also has great food options, ranging from casual to upscale.

Phillips Seafood will be recommended to you by just about everyone, and the Rusty Scupper has fresh-from-the-water seafood.

The rooftop of the Four Seasons has some of the best harbor views in town.

Cross City Market has various dining options under one roof, so don’t get full in one spot.

This area is also home to the American Visionary Art Museum, the Baltimore Museum of Industry, and Fort McHenry is next door.

Several places in Baltimore honor and remember the African American culture in Baltimore throughout its history.

These include the James E. Lewis Museum of Art, the Lillie Carrol Jackson Civil Rights Museum, the Maryland Center for History & Culture, and the National Great Black in Wax Museum.

The Maryland Zoo is located in Druid Hill Park and has been here since 1876.

With more than 1,500 animals from 200 species, there are plenty of ways to enjoy the zoo.

If you’ve ever wanted to help groom a goat, this is the place for you.

You can also play with a penguin or feed a giraffe.

The zoo is open even in the dead of winter.

Guided walking tours are available, and you have a lot of options to choose from, but one of the most popular is the Historic Fell’s Point Trail, where you’ll learn about the neighborhood on the edge of the deep-water port.

There is also a haunted tour through Fell’s Point to hear stories of sailors who passed away but still walk the watery streets.

In between those two options is the “Wicked History Tour,” where true yet macabre stories are told while on a pub crawl.

Places to Avoid in Baltimore

It’s almost easier to tell you the places not to avoid than the list of the places you should stay away from in Baltimore.

Definitely avoid West Baltimore and surrounding neighborhoods, and there are some dangerous parts of town east of I-83.

Just north of downtown, the area around McCulloh Street and West Preston Street is known for a lot of crime.

The city of Baltimore and the police department have a transparency hub where you can see all the crime locations from the past week, month, or year.

Please review this before your trip to see where crime trends are happening.

If you stick to the tourist attractions and don’t just drive around aimlessly, there’s a low risk you’ll end up in dangerous neighborhoods.

That does NOT mean you are safe in every other neighborhood, as criminals can easily go to a part of town where tourists are, and that’s why it’s incumbent upon you to make yourself a very unattractive target.

The mayor and police chief released a safety video you can watch on the city’s website that walks you through basic safety steps and what’s being done to keep tourists safe and also gives great advice for visiting any urban area.

Safety Tips for Traveling to Baltimore

So... How Safe Is Baltimore Really?

I could go through all the specifics of the crime data from 2020 and 2021, but this is one city where it’s safe to say all the rates are high.

BUT, that doesn’t mean every part of the city is not safe.

It’s careful research that will help you be better informed to travel as safely as possible through Charm City.

In August of 2022, during the lunch hour just two miles north of the zoo, someone opened fire on a group of bystanders and left seven hurt while one died from injuries.

These mass shootings aren’t exclusive to Baltimore, but it’s just another example of gun violence that police are struggling to control.

The homicide rate is so high the department has a hotline dedicated to tips about murders in the community.

June of 2022 broke the single-month homicide record in Baltimore.

City leaders released a five-year plan meant to reduce crime, improve community relations, and keep criminals from being released back to the streets.

There is also a plan to help engage young people so they can avoid falling into a life of crime, gangs, and drugs.

Funding is being added to help fight crimes, and law enforcement leaders have said they will catch criminals by “any means necessary,” even if it means arresting them for lesser crimes just to get them off the street.

“It’s not just what the Police Department can do, it’s how we change how people think,” Baltimore Police Commissioner Michael Harrison said.

“We have to change culture, and that’s a hard thing to do.

All that said, it’s rather challenging to find the perfect balance here of pointing out the risks while also telling you it’s a great place to visit.

There are people who have lived here for decades and have only had a vehicle broken into.

There are people who are scared to walk outside their homes.

Your perspective, preparation, and personal safety skills should be on point here.

The police department encourages anyone with questions to call and ask to speak with a safety officer.

There’s too much great stuff to see in Baltimore to miss the trip, but you also don’t want to let your guard down.

How Does Baltimore Compare?