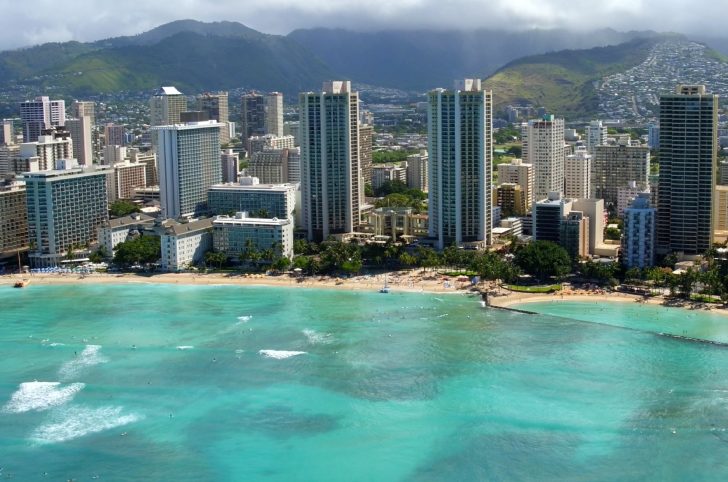 What is there to say about Honolulu?

It’s only the most coveted city in Hawaii, with its tropical climate and the crystal blue waters of its best-known tourist destination, Waikiki Beach.

Located on the island of Oahu, Honolulu is the capital and largest city of the state of Hawaii.

Though beaches may be the first thing that comes to mind when you hear the name of this city, it is the center of government, transportation, and commerce for the state.

Another thing worth mentioning for tourists is that in 2015, Honolulu was ranked as one of the safest cities in the United States.

And though you might think this is the perfect place to relax and unwind, you should keep in mind that it is a fast-paced and dynamic as any major city in America, which means all problems of major cities go with it: heavy traffic, drugs, crime, and homelessness.

The only difference is that Honolulu has the typical charm of a tropical island.

Honolulu is very safe for tourists, though there are some neighborhoods that are best avoided. Back in 2015. it was actually ranked as one of the safest cities in the United States. Avoid sketchy neighborhoods and take normal precaution measures.

Public transportation is actually pretty safe and reliable in Honolulu. There have been reports of pickpockets being active around stations and on trains. You should remain alert at all times.

Pickpockets are somewhat of an issue in Honolulu. You should always keep your belongings firmly by your side as bag snatching also happens. The best would be to keep your valuables in your accommodation.

As for natural disasters, there is some risk of Honolulu falling victim to disasters like tsunamis, flash floods and volcanic activity (which can lead to earthquakes).

When it comes to chances of being mugged or kidnapped, they are very low in Honolulu. Violent street crime is not a common occurrence but only if you avoid dangerous areas of some cities that even locals rarely dare to walk around.

As for terrorism risk, Honolulu hasn't been the target of any terrorist attacks recently, but the attacks shouldn't be ruled out. Be aware of your surroundings at all times.

There aren't many scammers in Honolulu. Still, you should be wary of anyone trying to distract you, flashing large signs in front of you or ATMs that look like they've been tampered with.

Honolulu has proven to be very safe for female solo travelers. Following basic precaution measures and acting as precautions as you would in your hometown completely minimize the chances of anything going wrong.

So... How Safe Is Honolulu Really?

The Waikiki area is the touristic center of the country, so it can get very crowded at night, which brings about police presence to prevent petty as well as violent crime.

The main thing to worry about here is thieves and pickpockets stealing your valuables while you stop to watch street performers.

Another issue to remember while on the beach is the sea currents, which you should not underestimate.

The area of Chinatown and its surroundings are best avoided during night time, though it’s very safe during the day.

Beggars and homeless people can turn aggressive towards tourists if you refuse to hand them some of your money.

Honolulu is considered relatively when it comes to violent crime, but there is a heightened risk of property theft.

Car theft or car break-ins are an issue, especially Diamond Head and the Halona Blowhole near Sandy Beach.

You should always lock your vehicle around these areas.

Keep in mind that in most of Honolulu, your car is not a safe place to store anything: thieves can dismantle locks, and even just bash your window open to take something.

At night, avoid poorly lit and deserted areas, never go near an ATM unless it is well lit, and stay away from the downtown area.

Muggings and theft are common here.

How Does Honolulu Compare?