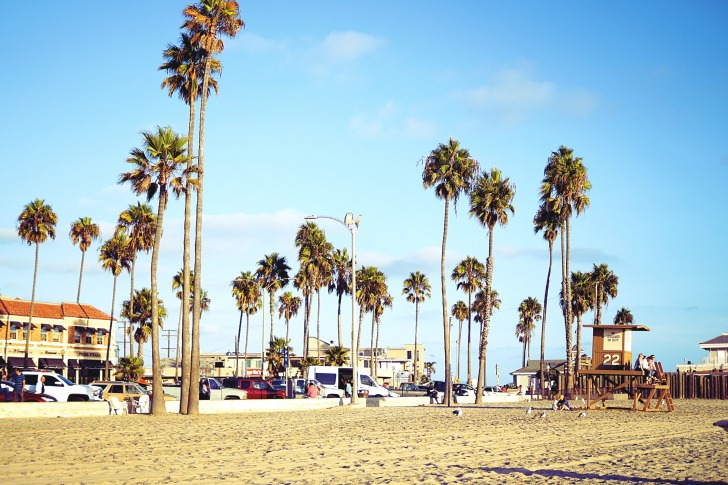 Santa Ana is the second-largest city in Orange County, in the Los Angeles metropolitan area.

The city is the county seat and is known as a cultural and arts center for the area.

It has a large zoo, many art museums, and is dotted with mission revival-style buildings.

Santa Ana is less than 10 miles from the Pacific Ocean and about 20 miles south of Los Angeles.

Though it is urban, it has parks with bike paths and hiking areas.

Art is often sold on the streets and food in open-air markets.

The airport is the closest airport to Disneyland, which is a short distance from the city.

One crime stat website rated the city in the 88th percentile, meaning 88 percent of the cities in California are safer than Santa Ana. It has a crime rate of 57 per 1,000 residents, which is well above the national average of 21. Residents say the west side is the safest. Tourist areas are safe in the daytime, but there are bad areas.

Santa Ana is the hub of public transport in Orange County, so there is a lot available, from trains, buses, streetcars, and taxis. They can get crowded, but they are reliable and generally safe. Incidents are rare. Taxis from the airport are licensed and safe.

California is known for fires and earthquakes. There have not been many in this area in recent years, but conditions exist for them to happen here. The crowded population could make such an event even worse if it were to happen.

There are areas where the risk is high even during the day, but tourist areas are pretty safe. A mugging during the day would be very rare. Criminals are out more at night, so it is not a good idea to be out alone at night, even in tourist areas. There is some risk, but common sense precautions will keep you safe.

A crowded area where there are a lot of tourists would be an area that terrorists might strike, but so far they have not. We rate it low because it has not happened, but it is an area that would be inviting to a terrorist. Conditions are right, so that means there is a little risk.

There have been reports of foreigners being drugged by spiked drinks and then being robbed. Do not accept an unsealed drink from anyone. There may be fake taxis, so make sure the one you use is licensed. Avoid people who offer you tours. The risk is typical for any tourist-heavy city.

The crime rate is high in Santa Ana, but women do not seem to be singled out as targets. There are a lot of tourists in this city, and women traveling alone is common. It is very safe in the tourist areas during the day.

Santa Ana water meets all federal and state requirements for safety. The water comes from a huge underground basin that provides most of the water for all of Orange County's 2.5 million people. Tap water anywhere in the Los Angeles area may have come from Santa Ana.

The tourist areas are safe and fascinating.

Art is also sold on the street.

The MainPlace Mall downtown is a collection of art, jewelry, and Mexican art of all kinds.

Floral Park is a neighborhood of expensive homes that is fun to tour.

The Santa Ana Zoo is 20 acres of the urban jungle that you can explore by tram or walking.

It always has at least 50 monkeys.

Fourth Street is popular with locals with all its shops and restaurants.

There are several museums worth a stop, like the Old Town Hall, which is now a city museum, the Heritage Museum of local history, the Bowers Museum of Art, and the Discovery Science Center.

The tourist area streets are filled with people and colorful sights.

Street vendors hawk food, souvenirs, and art that is made locally.

The tourist downtown area is fairly compact and easy to get around.

Places to Avoid in Santa Ana

Most of the crime happens in the southeast and northwest parts of town.

The crime rate is significantly higher here than in most cities its size.

The tourist areas of Santa Ana are great fun and safe for the most part.

It is outside of that area that it is unsafe even during the day at times.

Fairhaven, and Park Santiago, are communities on the north side that are very dangerous.

The national average is 400.

Merideth Parkwood is in the same area and also has a very high crime rate.

Centennial Park and Briston-Warner in the southeast are also high crime areas with some reported gang activity.

The bad areas are in the northeast and southwest primarily, and they can be very bad.

The good areas are very good.

So... How Safe Is Santa Ana Really?

Santa Ana is a city of contrast.

There is some of everything here.

There are beautiful historical areas, hip art areas, and these are the areas most tourists flock to.

There are also some bad areas with low incomes, poverty, and very high crime rates.

The bad areas are in the southeast and northwest.

The parts in between are very safe.

If you do not go into the bad areas, you will be safe.

Some tourist areas are even pretty safe at night.

Most of the rest of the city is in line with the national average of 400 or so.

The city ranks 66th out of the biggest cities in the nation as far as violent crime.

Tourist areas where the very wealthy live are very safe, even at night.

The lower-income areas can be very dangerous and should be avoided.

Except for one or two very bad areas, even the lower-income areas are not as bad as many American cities.

There were 207 rapes and 472 robberies in the city in 2019, which is more than many cities, but few of those were in the tourist areas.

Overall, there was a two-percent decline in crime in Santa Ana in 2020.

How Does Santa Ana Compare?