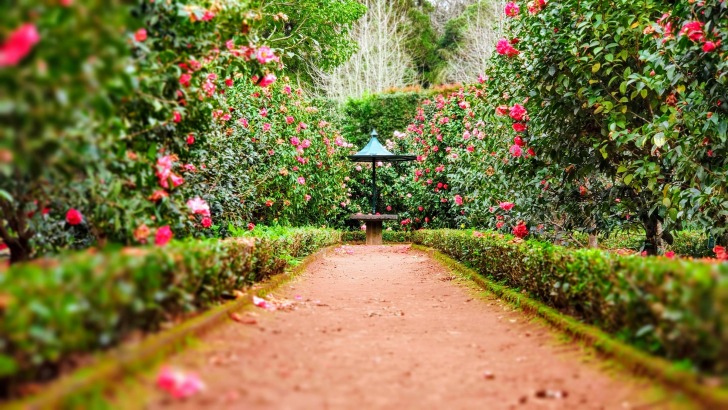 Garden Grove, California, isn’t what you’d normally think of an Orange County city, but it does have a vibe all its town.

This ethnically-diverse community is a stone’s throw away from the popular Disneyland Resort and Harbor Boulevard is packed with hotels.

Garden Grove’s central location makes it popular, and not just because of how close it is to Disneyland.

You’re 11 miles to Huntington Beach, a 40-minute drive to downtown Los Angeles, and less than an hour to the mountains.

In town, you’ve got a historic Main Street to see, several museums, and several unique community parks where the kids can burn off some energy.

A special heads up about Memorial Day weekend in Garden Grove as one of the largest festivals on this side of the Mississippi is held.

The Garden Grove Strawberry Festival brings about a quarter of a million people to this suburb.

There's a mixed bag of crime rates in Garden Grove, but none that come as a surprise. You have a low risk when staying here, but you'll need to be vigilant about basic safety precautions.

There are taxis and rideshares readily available in this busy tourism corridor. There is also the option of the OC Streetcar between Santa Ana and Garden Grove. You'll need to get to Santa Ana or Anaheim to ride the popular MetroLink. Having a car here would be ideal. All options come with low risk.

There were nine pickpockets reported in 2020 with a total steal of $1,258. This is a great reminder, even when going to Disneyland, to not carry valuables around in your purse or wallet and keep them secure. The risk is low that it will happen, as those nine thefts were just part of the 2,603 total thefts.

The city emergency plan covers the possibilities of earthquakes, blackouts, wildfires, heatwaves, and floods. There's a medium risk just because so many disasters can happen, but that rating is more about severity than frequency. You'll have nice weather on an average day.

More than half of the robberies reported were in public places that could include tourists. One mugging went viral when surveillance video caught criminals trying to grab the purse of a woman, and she was dragged then eventually run over by the suspect's car. There is also a string of robberies against elderly Asian women. Because of the recent rash of robberies, we're giving this a medium risk.

Disneyland might be one of the biggest targets for terrorists, so there's a medium risk here. In 1999, a terror plot against Disneyland was foiled by United States investigators.

There's a low risk. I reviewed about a dozen popular local scams, and they all either target businesses or local individuals. The only one worth mentioning to travelers is a scam involving donations. Be sure to check with the Better Business Bureau before you donate to any charity.

The crime rate for sexual assault is lower than the national average and there's a low risk for women here. However, that comes with the caveat of keeping aware of your surroundings and don't ever take a drink you didn't see opened or poured. If you are meeting someone you met on social media, make sure the meeting is in a public place, ideally with surveillance cameras around.

Due to an abundance of PFAS in the water, the city had to shut down some wells and get water from Northern California in 2020. The utility states on its website, "In collaboration with the City, the Orange County Water District (OCWD) designed and deployed treatment systems which filter PFAS from the groundwater. Garden Grove remains steadfast in our mission to provide a sustainable water supply and exceed all state and federal drinking water standards and regulations."

Historic Main Street is a great place to start.

Walk the tree-lined streets with the smell of citrus in the air while shopping and dining.

You’ll love the unique architecture of the buildings and the friendliness of the merchants.

The Atlantis Play Center is a community park designed like an underwater world of fantasy.

The park is only open to adults with kids.

Visit the Stanley Ranch Museum & Historical Village for a walk back in time when orange groves filled the city and Walt Disney was still planning his theme park.

There are 16 historical buildings here, including an 1890s schoolhouse and Walt Disney’s former garage.

The Crystal Cathedral is a popular place to snap a few photos of the church with 10,000 windows.

Places to Avoid in Garden Grove

Looking at the crime maps, you’ll see a lot of hit or miss in the more crime-ridden areas.

Along the Garden Grove Freeway, there are some hot spots.

I wouldn’t say any of these areas should be avoided, but just know it’s a mixed bag of crime and the closer you get to the 5 interstate the more crime gets reported (and that’s also closer to the hotel corridor for Disneyland, so that’s not surprising).

West Garden Grove is a fine place to visit, but there’s not much to do there.

Thefts are four times the national average here and 65% of those involved things being stolen from vehicles.

Roll up the windows.

Leave nothing inside that has any value.

Hiding under the seat or in the trunk still isn’t a good enough theft prevention step.

If you can, rent a car with wheel locks and get an anti-theft device for the steering wheel.

So... How Safe Is Garden Grove Really?

The violent crime rate in Garden Grove is about 25% less than the national average.

The city averages less than six homicides a year, and in 2012 had no homicides.

There’s less of a chance a person will be a victim of a violent crime here.

Property crimes are about 10% higher than the state and national averages, including thefts.

There is a one in 66 chance of being a victim of a theft, which you can lower by locking up the car and keeping personal valuables at the hotel.

Carry as little as you need with you.

This is mostly a neighborhood community that happens to be right next door to one of the busiest tourism corridors in the country.

There are going to be more crimes of opportunity than in other communities.

Since it is such a large tourist area, police are extraordinarily vigilant about keeping crime down and they not only fight crime but put together plans to reduce crime in the future.

How Does Garden Grove Compare?