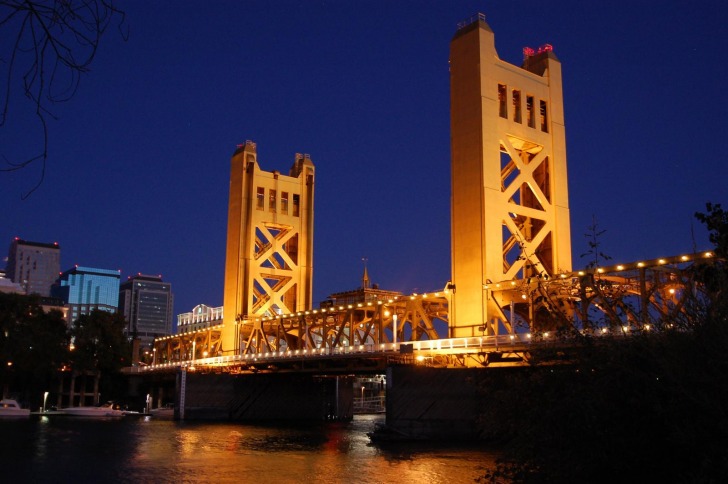 Sacramento is in Northern California, halfway between San Francisco and the Nevada state line.

It’s also the state capital and one of the most diverse cities you’ll find in America.

The city’s beginning dates back centuries but became well-known during the Gold Rush in the 1840s when prospectors gathered supplies before heading into the mountains with dreams of striking it rich.

One thing to remember as we go through this discussion about safety in Sacramento — because some parts will be tough to hear — is that it’s a resilient place despite all odds.

Within its first 15 years of being incorporated, the city sustained three major floods and two massive fires that reduced it to rubble.

Yet, it is still the legislative headquarters of a powerful state.

The central California region is surrounded by rich agriculture, which has turned Sacramento into a “Farm-to-Fork” city, allowing for an expansive and delicious cultural food community.

The diversity of this community also brings ethnic neighborhood options for tourists, while downtown and Midtown offer a blend of all cultures and entertainment.

Another bonus of visiting Sacramento is that you can be at Lake Tahoe in two hours.

The alpine lake is a tourist attraction itself and one of my favorite places on earth.

Lake Tahoe offers the fun of casinos and entertainment districts on one side.

The California side offers more recreation and natural escapes with some of the best skiing in the Western United States.

There's a medium risk in Sacramento, and that risk is growing. Violent crime rates are near twice the national average, and between 2020 and late 2022, a surge in violent, random crime is forcing local leaders and law enforcement to urgently find new strategies for crime control.

The public transportation system in Sacramento is SacRT. You can use the Alert SacRT app to track buses and light rail cars, but be aware the system is aging, and there are safety concerns. Taxis and rideshares are available, and you can also get a car rental - which is the best way to get around safely.

Sacramento Police don't release data on pickpocket numbers, but the overall theft rate is 24% higher than the national average. The biggest concern here is the homeless population, which has seen a meteoric population increase in the past few years. Desperate people could be more prone to pickpocketing or worse.

Flooding has wiped this city out several times in history, and the Sacramento River rides the east side of the city boundaries. Flash flooding and ongoing floods will always be a concern. Even if it's not raining, the snowmelt from the mountains can cause catastrophic floods. Wildfires are another big concern in Northern California. Even if a fire isn't burning nearby, the air quality can be greatly impacted by one.

The robbery rate is two and a half times the national average, and in 2021 and 2022, there were some pretty brazen robberies in plain sight. In one, a woman had her groceries and phone snatched from her in broad daylight. Another involved a man playing pinochle being robbed and then shot in the face. Treat this with medium risk and keep your mobile device, wallet, and purse as hidden as possible. Also, avoid weather valuables in public, like expensive watches or jewelry.

There's a medium risk because of the large population and the governmental importance of the city. While the average tourist won't notice any of those risks, you can review the Department of Homeland Security Terrorism bulletins that are posted every few months with updates.

Some quite outrageous scams are reported in Sacramento, including one woman who fell for a scammer posing as actor Will Smith. While there aren't a lot of tourist-centric scams, you should be on the lookout for anyone offering a deal too good to be true, especially on rental homes if you are trying to stay outside a traditional hotel. Never buy gift cards as part of a "lottery" or under duress, as scammers use them to get your money in an untraceable way.

Women should use the same caution as anyone else, with a medium risk at all times of the day. If you are walking or running, don't wear headphones so you can be aware of the noises around you. Certainly, don't walk around alone at night. Use rideshares or taxis as much as possible to get around. There have been too many random attacks on the streets, including several sexual assaults by deranged homeless people, to risk walking any more than you need to.

The water provided to Sacramento meets or exceeds all safety requirements, according to the 2021 Consumer Confidence Report for water quality. You can review information closer to your visit at sacramentowaterquality.com.

Safest Places to Visit in Sacramento

VisitSacramento.com is the official tourism site for the city.

For the best cyber security, use official websites run by a city or convention and visitor tourism bureau.

These sites will be more secure and offer more privacy with your personal information.

A museum is a safe place to visit with security cameras, larger crowds, and generally in areas with more police presence.

Here is just a sample of the museums here:

The city also has historic sites that are referred to as parks.

With the rich history here connected to Native Americans and the Gold Rush, there are some truly one-of-a-kind parks to see here.

The Old Sacramento Waterfront has an 1850s Gold Rush era theme to it, right on the banks of the Sacramento River.

You can take a riverboat tour here.

The Delta King is a riverboat turned into a boutique hotel.

While Old Sacramento is near downtown, they are two different neighborhoods.

Midtown is another great place to visit, with cultural options for food, drink, shopping, and live performances.

Fairytale Town is a safe, family-friendly attraction that takes you back to “Once Upon a Time…” Hours adjust with the seasons, and you can buy tickets online ahead of time.

Places to Avoid in Sacramento

The SacPD Violent Crime Reduction Strategy posted on the department’s website gives a look at some of the hot spots for crime in the region and a new method to track those areas.

While you can review the map online, the general areas are north of the American River, south of the El Dorado Freeway, and the area southeast of the Sacramento Executive Airport (not the commercial airport).

However, more crime was spilling into neighborhoods generally considered safer.

“We’re tired of the gun violence, quite honestly, in all parts of our city and not just downtown,” Sacramento Police (SacPD) Sgt. Zach Eaton said during a crime statistics update in 2022.

Safety Tips for Traveling to Sacramento

So... How Safe Is Sacramento Really?

Sacramento not only has a higher-than-average crime problem, but the accelerated rate of that growth over the past few years is also concerning.

Even a notable personality in town tweeted that she doesn’t feel safe jogging in the middle of the day.

While that might be some theatrics because this isn’t wartime Baghdad, there are enough random and brazen crimes stacking up that it should get community engagement to help make the streets safer.

The reason for the crime problem splinters in so many directions that it’s hard to assign one – or two or three – root causes.

First, there are gangs, drug dealers, and typical crime-ridden communities.

Add to that a 70% increase in transients or homeless since 2019.

Sacramento has more homeless people than the much larger San Francisco.

The homeless problem is due, in part, to unaffordable housing rates and inflation that too many people just can’t afford.

Then there’s criminal reform, which is a political discussion on some levels.

However, it does lead to some repeat offenders getting out of jail early.

There aren’t enough mental health services to truly help those who shouldn’t be on the streets.

Keep in mind that many of those categories are also trending up in 2022, but final-year data isn’t available at the time of this publication.

Crime in 2022 was trending toward an increase of nearly 20% across the board.

Domestic violence, which generally won’t impact a tourist but fuels the crime rate, was up in 2022, with an average of nine incidents each day through early June.

If you stay out of the more dangerous parts of town and avoid the homeless camps while also perfecting personal and vehicle safety, you can lower your risk here.

We’re not really ones to be alarmist about the crime rate in a city, and we certainly don’t want to scare anyone away from visiting all the great sights to see here.

That’s why focusing on safety and being transparent with information is so important.

How Does Sacramento Compare?