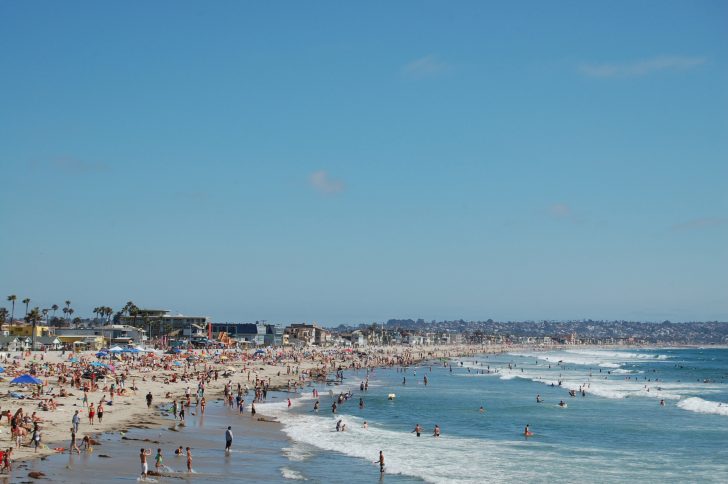 San Diego, California, is known for its beaches, but there’s so much more to this city in the southernmost part of Southern California.

The city is actually quite large and brings a wonderful blend of mountains and canyons with beautiful beaches and cliffside views.

It’s also a major port and military location for the country’s defense and its watery borders.

The largest naval base in the Western U.S. is here, with 26,000 people – military and civilians – supporting the cause.

Look on the tourism website for the blog “Top Gun Filming Sites” to see what locations you can still visit.

History lives in many neighborhoods here, from Old Town with its Spanish influence to Coronado on the peninsula and the globally recognized Hotel del Coronado.

You are one of 35 million people who visit San Diego each year, and many major attractions, like SeaWorld and two major zoos, keep people coming back.

The Gaslamp Quarter is another big draw for daytime shoppers and nightlife lovers.

Whether you want to visit an underground speakeasy or dine at a rooftop bar, this city provides many opportunities with pleasant weather throughout the year.

San Diego is one of my favorite cities to visit, and each time it’s a whole new experience with growth happening and numerous things to see and do.

There's a low risk here, with crime rates bucking the national trend of surging violence. In 2021, all major crime categories were slightly below the national average. That's no small feat in a city of nearly 1.4 million people.

San Diego has really mastered the art of getting around. There are trolleys in the downtown area to get tourists to the popular districts. Old Town has a trolley too. The "Coaster" train takes people from the busy city areas to the coastal communities, and the sprinter gets you on an east-west route through the nearby cities and back to San Diego. Taxis and rideshares are available and rental cars are plentiful. There is also a ferry that can take tourists to Coronado. You really can't go wrong with any option.

With nearly 17,000 thefts in San Diego, just 148 of them were pickpockets or purse snatchings in 2021. That's a low risk, but it's still worth the extra attention to limit your risk. Carry small purses and put wallets in front pockets. The bigger risk is your car being "pickpocketed," with 50% of those thefts being related to car break-ins or burglaries.

Ready San Diego shows the biggest risks are wildfires, earthquakes, tsunamis, and flooding. SoCal wildfires have been increasing in intensity over the past decade, so you must take those seriously. Earthquakes can happen anytime, but you won't get advance warning, so you should know basic safety before you go. Tsunami risks will come with alerts, and it's critical to heed those warnings.

About 1/3 of robberies happen on public streets, but the average robbery rate is at the national average. Use extra caution at night because the popular bar scene might make robbers search for crimes of opportunity.

It's not just the Navy, Marine, Coast Guard, and Department of Defense located here. Several major defense contractors have their headquarters in San Diego. The deepwater port is used for shipbuilding and submarines. All that makes San Diego a sweet target for a potential terrorist attack. It also means there's a lot of security to prevent any attacks. You'll see that level of security if you accidentally enter a military area while walking the piers. Ready San Diego has a whole section about terrorism preparation and prevention.

You might feel like you're being scammed when visiting San Diego because of the high prices in some popular areas. That can make actually being scammed a lot harder to spot. Here's the best advice. o Hotels and restaurants near the beach are going to cost more. Period. You are paying for the view and the ambiance. Any deal that seems too good to be true - is. o Don't use third-party websites, like Craigslist, to get discount tickets or rentals. Scammers prey on people who use these sites, and you won't always be able to easily distinguish a scammer until you've lost money. o A day of walking can make a Pedi-Cab seem like a lifesaver, but know the price before you get on board. If you don't agree with the price ahead of time, you could face a steep charge just for going a few blocks.

Women are statistically less likely to be a victim of violent crime, according to 2021 data. The sexual assault rate is also lower than the national average. I would recommend traveling with a group or a friend while walking around, but solo exploring isn't too risky during the day. At night, the environment can be a little rowdier.

The 2021 Annual Water Quality Report for San Diego shows full compliance and no violations. It's worth reviewing the conservation information so you can help prevent water overuse. You can also email the water quality department if you have additional questions. That email is drinkingwaterquality@sandiego.gov.

SanDiego.org is run by the San Diego Tourism Authority and should be your starting point for research.

This site provides a secured platform, verified attractions, and links to purchase tickets.

If you’re traveling internationally, there’s a section where you can choose your home country and get a website catered to tourists from that area.

Since San Diego is so large, let’s go through the different places you might want to visit.

San Diego has an extensive array of beachfront regions.

Some are more crowded, while others are remote.

Some bring history and entertainment districts, while others are more wilderness based.

Coronado, La Jolla, Mission Bay, and Point Loma Peninsula are some of the most popular for tourists.

The districts downtown are a lot of fun (I’ve been there and can vouch for this).

With so many major attractions in San Diego, we aren’t going to be able to cover them all.

I would recommend every traveler take the time to visit the USS Midway Museum to step aboard a navy carrier that has been serving the country for more than 60 years.

From climbing into a cockpit to doing a flight simulator, you can truly channel your inner “Maverick.”

Audio tours are available for kids and adults for a more customized experience.

San Diego Zoo is in the popular Balboa Park.

Other attractions in Balboa Park include:

Packages are available through the tourism website to get discounts on the Balboa Park attractions or a price break for those who want to see the zoo and safari park.

If you want to visit Old Town, grab an “Old Town San Diego” guide at the tourism center or download it online.

This area is big enough to have its own strategy session to make the most of your visit.

You can also explore Shelter Island if you want the trip to feel more like a beach getaway while still having the city close by.

It’s touted as a “Polynesian Getaway.”

Places to Avoid in San Diego

The city’s southeast section has higher crime rates, but there’s a very little risk you’ll end up in a part of town that is too dangerous.

The real risk here is based on your own behavior.

It’s easy in a beach city that’s so beautiful and laid back to relax your personal safety behaviors.

Especially when you’re walking around at night, try to stick with friends or take a rideshare instead of walking back to the hotel.

As a young female, I was there with a group of friends, and two of us wanted to go home.

The third wanted to stay and said she’d walk back by herself.

We didn’t let that happen, but it was more because we are ultra-protective and less because of the risks we saw.

Just because the city is safer than many American cities doesn’t mean there’s no crime.

At night, avoid the marina and pier areas as they are darker, with fewer people around if someone needs help.

There’s an outlet mall on the American side of the border.

If you want to go to Mexico, you should read the travel warnings from the U.S. State Department, as some parts of Mexico are way too dangerous for tourists.

As of late 2022, the State Department recommends you “Reconsider Travel” to Baja, Mexico, where Tijuana is located.

This is the verbatim reason:

Travelers should remain on main highways and avoid remote locations.

Of particular concern is the high number of homicides in the non-tourist areas of Tijuana.

Most homicides appeared to be targeted; however, criminal organization assassinations and territorial disputes can result in bystanders being injured or killed. U.S. citizens and LPRs have been victims of kidnapping.”

So... How Safe Is San Diego Really?

While San Diego leaders and law enforcement are doing a good job keeping crime at lower-than-average levels, the drug problem here is growing.

About half of the violent crime that happens here is against strangers, which is a little higher than in other major cities in America.

Being so close to the border, San Diego is considered “Ground Zero” for the drug trade.

While record seizures and arrests are happening in 2022, the overdose numbers eclipsed 2021 in the first six months of 2022.

While illegal drugs are a problem in any capacity, the growing problem in America is that drugs are being cut with cheap Fentanyl – an opioid exponentially more dangerous than heroin.

Fentanyl can’t be seen, tasted, or smelled when cut into other opioids, marijuana, or meth – and a lethal dose is just a few grains of salt-sized material.

I saw all of that for a reason.

Some of these drugs are made to look like candy and seem harmless at first glance.

Some people want to go on vacation and “let loose, ” which might mean experimenting with drugs.

This isn’t a warning about illegal drug use – you know that’s wrong – this is a warning that you might be taking a lethal dose of a drug without even knowing it.

You could think someone is selling you a Xanax, which, in turn, could kill you.

You should also use all that caution we talked about with your vehicle.

Even if you go to the beach, don’t leave a bunch of stuff in the car.

If you are going to store things in the trunk, load it up before you get to the beach so a thief can’t see you stashing the goods.

As far as big cities in America, San Diego is among the safest while still having an insane number of things to do.

How Does San Diego Compare?