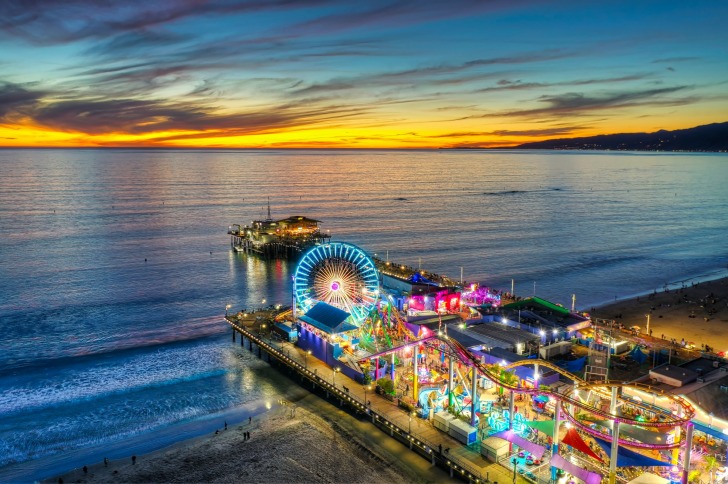 Even people from Los Angeles get away to this charming community on the water.

It’s a beach lovers’ paradise with an air of sophistication around every corner.

This walkable (or bikeable) city provides everything you need to relax, dine, and window shop the day away.

You’ve probably seen the Santa Monica beachside bike path in one of your favorite movies.

The must-see Santa Monica Pier offers an Instagram-worthy photo opportunity with bars, restaurants, an amusement park, and sunset views that will take your breath away.

U.S. News and World Report rank this city in the top 10 Best Places to Visit in California and its clear tourists feel the same, with 8 million people on average visiting each year.

There's a medium risk overall in Santa Monica, simply due to the lure of tourists, which can make easy targets for crooks. The crime numbers overall are lower than the California average.

The city of Santa Monica strongly encourages visitors to ditch the car and use other transportation options. Given the variety and oversight of the various modes of transportation, we're giving it a low risk. You can choose from electric scooters, rideshares, the Big Blue Bus catering just to the Santa Monica area, golf-cart rides through Circuit, and a Metro rail stop from Los Angeles.

A medium pickpocket risk exists in Santa Monta because people tend to come here with lots of money and are ready to spend it. Especially at the shopping Mecca on Third Street Promenade, it's important to keep an eye on your belongings.

The very day this article was written, Santa Monica was hit by a magnitude 2.8 earthquake. So there's a medium risk of some kind of seismic activity, but if you are a Southern California native reading this, you might laugh saying "That's just a way of life here." The San Andreas fault is the biggest earth-shaker, but there is a Santa Monica fault line as well. Wildfires can impact air quality here as well. The average thunderstorm or rainy day? Those are few and far between. On average you'll get mild weather, and the only downside is in June when there's a lot of smog and gloom over the picturesque community.

The medium risk from pickpocketing carries over into the mugging category. Santa Monica police encourage visitors to store their wallets inside a jacket or shirt and also keep purses under a firm grip close to the body.

The Los Angeles Metro area is known to be a potential target for terrorists, but there's no impending doom lurking over the city. Nevertheless, we'll give it a medium risk. Santa Monica Police encourage everyone to "See something, say something" when it comes to anything that seems odd.

Santa Monica Police say a con game can happen to anyone, anywhere, but elderly people are especially vulnerable. There's a medium risk this could happen in such a busy area. Police recommend never giving out personal information or taking out cash to help someone, no matter how honest they seem.

Women have a medium risk for all the reasons we've listed above. You can lower that risk by following basic common sense— be aware of your surroundings when walking through new areas, be confident in your attitude when walking, and stay near areas where there are businesses or other people. There are a lot of panhandlers in the Santa Monica area, and you can just ignore them and keep walking.

Santa Monica has a low risk in its tap water. The latest water report shows no violations and that the water meets or exceeds regulations. The city does advise people to use tap water sparingly to help with the drought.

Santa Monica is home to eight neighborhoods, each offering a different slice of Southern California life.

Given how tourism-driven this community is, you’re going to see a lot of police officers.

The bigger the crowds, the more police you’ll see.

Here’s a glimpse at the neighborhoods:

The Santa Monica Pier is one of the most patrolled parts of the city, but it also has the biggest crowds.

Just use common sense when it comes to safety.

Places to Avoid in Santa Monica

When every one of the eight neighborhoods has a crime rate lower than the rest of Los Angeles, it’s hard to say there’s a “bad” part of town.

Violent crime has been so up and down over the past 30 years, but there’s a downward trend from the crime spikes of the 1990s.

You’ll want to avoid the groups of homeless people that can gather in the touristy areas like right along the beach or near the shopping areas.

Santa Monica residents talk on social media about how there are a lot of panhandlers, but they aren’t known as aggressive and if you ignore them they’ll leave you alone.

According to crime stats and social media reports, the area south of I-10 might get a little more dangerous, so don’t go walking there at night.

You can walk around at night in the neighborhoods, but avoid walking down alleys or dark streets, like you would any city.

Stay on lighted paths near people.

So... How Safe Is Santa Monica Really?

Let’s break down the numbers.

Now, let’s look at that number with tourists added in.

Santa Monica officials say on any given day there are 250,000 in the area.

With Santa Monica being such a tourist draw, the city officials and law enforcement are going to put extra focus on keeping it safe.

You just shouldn’t set yourself up for a crime of opportunity by wearing expensive jewelry, flashing money around, or leaving articles unattended when you jump in the water or run to the bathroom.

How Does Santa Monica Compare?