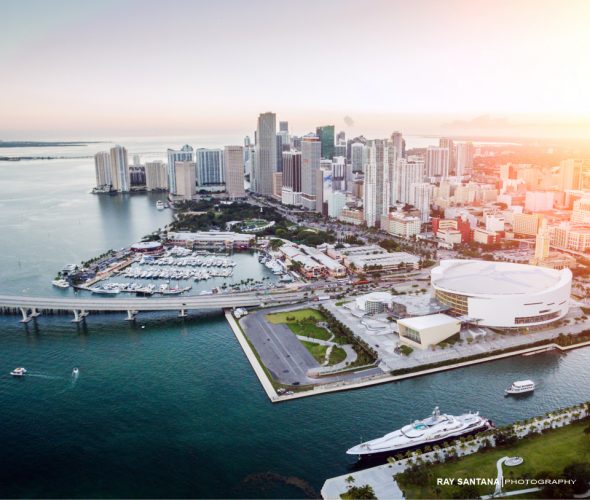 Located in the south-eastern part of the United States, Miami is a major city and part of the largest metropolitan area in Florida.

It is also the single largest city of the state of Florida and the 7th largest of the entire U.S. when it comes to population.

The first thing that comes to mind when you think of the word Miami is its white sandy beaches, warm ocean, clear blue water and that unique tropical climate with a specific island-ish feel to it.

It is the main reason tourists adore Miami, apart from the fact that it is rather safe for visitors if you disregard the dangerous areas that are famous for the gang and drug violence.

Surprisingly for many, Miami beach is its municipality.

Like a nook east of Miami and Biscayne Bay, it’s where a bunch of beach resorts is located and not just any kind of beach resorts: it used to be one of the most popular spring break party destinations in the world.

Miami is overall a safe city, especially for tourists. It has some dangerous areas that should be avoided, but they are far from the usual tourist landmarks. You are advised to remain vigilant around tourist landmarks, since pickpockets are an issue there, and keep an eye out for suspicious activities wherever you go.

Taxis and public transportation are considered safe in Miami. Still, you should avoid finding yourself unaccompanied on bus, metro or railway stations. Be wary of pickpockets while on public transport.

The most common types of petty crime are pick-pocketing and purse-snatching on Miami beach and in the crowded Downtown streets. Apply common sense and precaution measures like holding your purses tightly and being wise when carrying them, keeping wallets in front pockets, and being alert to one's surroundings. This should be enough to prevent these incidents.

When it comes to chances of being mugged or kidnapped, they are moderate in Miami. There are some parts where tourists should avoid, but apart from those parts of the city, tourists should be fine elsewhere. Stick to the main streets and avoid suspicious areas and neighborhoods, or getting in altercations with individuals that appear to be gang members.

Miami hasn't been the target of any terrorist attacks recently, but possible attacks shouldn't be ruled out. Be aware of your surroundings at all times.

Just like in other tourist destinations, there will be people trying to scam you in Miami, too, though it's not too common. Be wary of anyone trying to distract you, flashing large signs in front of you or ATMs that look like they've been tampered with.

Miami is generally safe for women to travel to. You should avoid dangerous neighborhoods (and this doesn't only apply to women). Just follow your basic common sense and general rules of things to avoid, like poorly lit streets and deserted areas and you should be fine.

So... How Safe Is Miami Really?

Though it is depicted in movies, tv shows and news as the main trading point for drug smugglers, and a prostitution and gang hub, Miami isn’t that dangerous for tourists – even less.

Of course, there are many areas and neighborhoods in Miami were walking, especially at night, should be avoided or at least conducted with caution and accompanied by someone.

These areas are Overtown and Liberty City which have the highest violent crime rate in the city.

They should be avoided both during the day and after dark.

If you do find yourself in these neighborhoods, act as you would in any other dangerous part of the city.

Look for a way to get out of there quickly and act inconspicuously.

Another issue in Miami is that it has been identified as an affected area of the Zika outbreak.

Contrary to popular belief (and the general rule of thumb) Miami Beach is very safe and you don’t have to stay away from it.

Still, while on the beach, keep an eye out for your stuff as they may disappear in a blink of an eye.

It is particularly safe compared to other parts of the city.

This can usually happen around bars.

How Does Miami Compare?