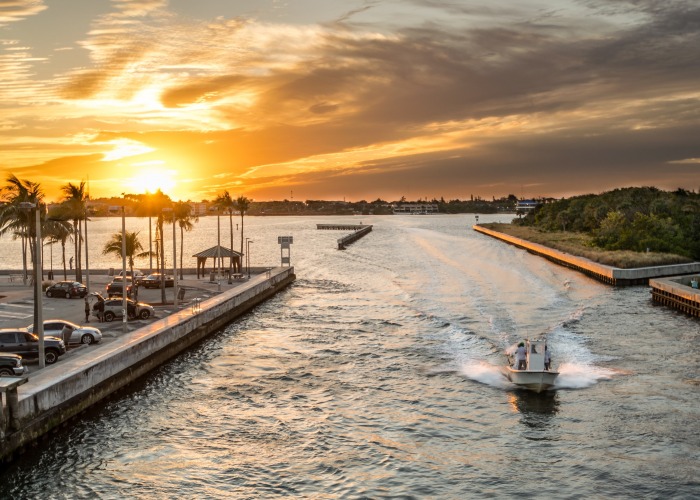 Boynton Beach, Florida, is the quintessential Florida community near the water except for one thing — it doesn’t have a beach.

It has a very small sliver of beach at Gulfstream Park, but the rest of the city is on the west side of the Intracoastal waterway.

That said, there’s still a plethora of water-related activities to enjoy.

This community blends tourism and neighborhoods, history with future growth plans, and amenities with crime risks.

Boyton Beach is on a part of the beautiful Florida coastline where it’s hard to tell where one city ends and another begins.

It’s an hour north of Boca Raton and less than a half-hour south of West Palm Beach.

This central location makes it great for trips to either end of the South Florida coastline.

There's medium overall risk. The city has some high crime rates that are concerning, but peeling back another layer, you'll find an impressive lowering of crime rates over the past few years. 2020 numbers were lower than the police department has seen in 20 years.

The theft rates are 5% higher than the national rate, yet there were no reports of pickpocketing or purse stealing. There's a low rate here, but you always want to keep a close eye on your purse or wallet.

Boyton Beach is subject to the same risk of hurricanes as other neighborhoods in South Florida. The season runs from June through November. Summer storms can be brief, yet fierce. Just because of the storm potential, we'll give it a medium risk.

The highest number of robberies happened in or around homes, but 25% of crimes were highway robberies. We'll call it a medium risk just because this and other violent crimes are a little high compared to national averages.

The whole South Florida East Coast should be considered a medium risk for a terror attack, just because of the damage that could be done to a large swatch of population and critical ports. There's nothing in Boyton Beach that makes it a strong specific target.

There's a low risk of a scam against a tourist as most are targeting residents. There's one I do want you to know about. A scammer got hold of a couple's bank account information and set up a Venmo account using the account numbers. Each month the scammer took out $1500 until the account was drained. This is a good reminder, especially when traveling, to check your bank account daily, or every couple of days, to make sure no unauthorized charges go through.

I found it interesting that in Boyton Beach there's a company that coordinates vacations between singles, whether it's a couple looking for love, or a girlfriend's weekend getaway. Anyway, rapes were the only crime category that wasn't above the national average. To err on the side of caution, I'm still going to call this a medium risk. There are some sketchy neighborhoods and you shouldn't be walking around this town alone at night.

There's a low risk in tap water. It meets all state and federal requirements, and while there are some consumer complaints about the smell of the water, that can be from several things like flushing the lines with chlorine or it could even come from the pipes in the house.

Parking might be challenging if you get there mid-day, but a wooden walkway takes you right to the shores of the Atlantic Ocean.

Marina Village at Boynton is the best place to get a charter boat, go on a fishing expedition, or sign up for a scuba trip.

There are also some restaurants there to enjoy some fresh-caught seafood.

The small part protects the gopher tortoise and is home to the American redstart bird, the green anole reptile, and the eastern gray squirrel.

This is part of the Great Florida Bird and Wildlife Trail.

There’s an elevated boardwalk that takes you through 100 acres with a self-guided walking tour.

As you explore around town, there are public art displays in South Boynton, Downtown, Central Boynton, and North Boynton.

The art display project is always growing, so check #BoyntonArts for the latest installations.

On the west side of town, you’ll find Boynton Beach Mall.

It’s the standard American mall with shops and dining options indoors (you’ll be glad for the air conditioning at some point during your trip. )

Places to Avoid in Boynton Beach

The crime maps show, and social media forums back up, that you should avoid stopping in the I-95 corridor area.

It’s not the best neighborhood to get gas.

The farther west you go, the safer you will be.

This isn’t a city with a lot of places to visit in the middle, and the bulk of the hotels are on the west side of town as well.

If you want to go to the beach, get out of Boyton Beach properly.

While every stretch of water is beautiful, there are beaches with more amenities either north or south.

So... How Safe Is Boynton Beach Really?

It’s a hit-or-miss kind of town.

The bad places can be pretty bad.

That’s near that I-95 corridor.

Crime maps show the center part of town is the most dangerous and everything gets safer the farther west you go.

None of the beachfront areas are in Boynton Beach, aside from Gulf Stream Park, and that’s just 600 feet long.

You’ll be in another city if you go to other beaches.

The crime rates are higher than the national average than any other city in the nation, but according to Boynton Beach Police, they are on a downward trend.

“This decrease speaks volumes to the focused efforts of all of our employees,” said Police Chief Michael G. Gregory.

“Our approach is all-hands-on-deck, using a multitude of tactics and crime-fighting strategies that are constantly evolving based on crime patterns.”

How Does Boynton Beach Compare?