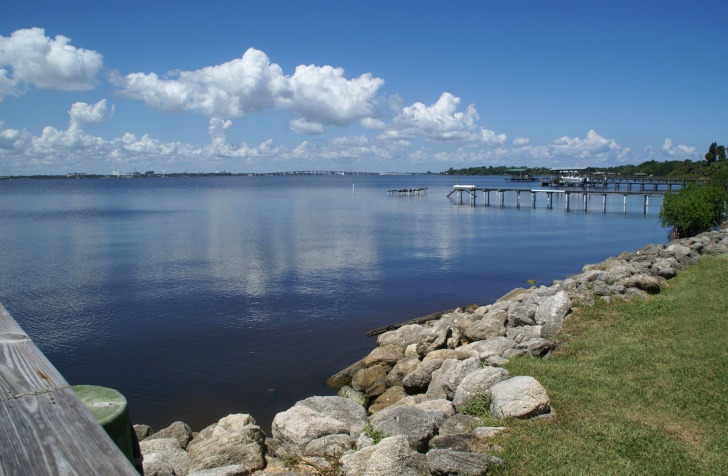 Melbourne Beach, Florida, sits along the popular Space Coast and is a prime viewing location for rocket launches at nearby Cape Canaveral.

This family-friendly destination has something for every member of the family, from surfing to fresh seafood dining to upscale shopping.

This quintessential beach town is known as “The Harbor City”, so it makes sense that a lot of activities here are built around the water.

There’s also a major airport in this small town, a rarity among Florida beach communities.

What’s bizarre about this city as I investigate is the staggering high crime rates, combined with social reviews claiming it’s a great place to live.

Even some of the headlines to come out of Melbourne feed into the “Florida Man” memes that bring attention to bizarre crimes in the Sunshine State.

Then pile on that, there are crime rates that have been dropping for the past few years. U.S. News and World Report even put this city in the Top 10 Safest Places to Live in the country.

To make this all the more confusing, there’s Melbourne, the city this article is about.

Then there’s Melbourne Beach, which isn’t the beach of the city of Melbourne.

Melbourne Beach is a whole city itself.

There’s Melbourne Village, and West Melbourne, both separate from the city of Melbourne.

We’ll go through all the individual risks, but just know there’s appearance and reality with this beautiful beachfront city.

There's medium overall risk. The crime rates are among the highest nationwide for smaller cities, yet it's along with one of the most prestigious coasts in all of Florida.

There's a low risk of using public transportation. The Space Coast Area Transit provides a plethora of routes and stops throughout Brevard County. There are 23 routes between 72 buses. Taxis and rideshares are also available and regulated by the county. There are shuttle options from the Orlando Melbourne Airport to hotels as well.

While the theft rate is 1.6 times the national average, there were only 29 pickpockets or purse snatching in 2020. 60% of all the thefts were for under $200. It appears that number is high, but bulked up with petty thefts. You have a low risk of being a victim here.

Melbourne can get hit by hurricanes and face some of the severe thunderstorms that plague much of Florida. Because of this, it's medium risk.

There were 86 robberies in 2020 and 19 of those were in the category that could be against tourists, so there's a low risk of you being targeted. However, the overall robbery rate is 20% higher than the national average.

I would think terrorists would love to target the hallmark of U.S. space travel, so we're going to call it a medium risk. While Cape Canaveral isn't as busy as it used to be, there's still a lot of action in and around it as private companies now literally aim for the skies and beyond.

The main scam to watch out for involves rentals. This is when someone offers a great beach house at a low rate, and the traveler hands over money ahead of time, generally via wire transfer, to "secure" the rental. Turns out the house doesn't exist and the money is gone. Other than that, there's a low risk.

Rape is one crime category that is lower than the national average. If a woman stays in the tourist spots and doesn't go walking around in the dark in strange neighborhoods, there should be low risk. The doubling of the national average rates of violent crime makes me second guess that decision, but there's nothing in the crime data that suggests a woman is particularly at risk.

There's a low risk in the tap water of Melbourne, Florida. All water meets or exceeds standards, and it's tested thousands of times each year to look for any irregularities. There is even a hotline people can call if they find an issue.

Safest Places to Visit in Melbourne

It is The Harbor City, so we’ll start at the Melbourne Harbor Marina.

This is a great place to get boat fever by looking at all the boats in port.

Just north of the harbor is historic downtown Melbourne, a charming area with food and shopping options along 3 square blocks.

Head over the Melbourne Causeway to Melbourne Beach for some beach time.

Well, Paradise Beach, that is.

You can catch some rays, learn to surf, or enjoy the playground area.

Have fun exploring the other beaches that span this barrier island.

There’s the Melbourne Beach Pier, but don’t go looking for it on the beachside.

It extends out on the other side of the island over the Indian River.

The Brevard Zoo is in Melbourne and it isn’t like any zoo you’ve seen before.

Here you can kayak through an African jungle.

Ride the train through Cairo.

Meet a rhino up close.

Don’t forget the giraffes that need to be fed!

There’s even the Treetop Trek, where you can zip-line through obstacles and over animals, including alligators.

Places to Avoid in Melbourne

Crime maps show the area around the airport has the highest crime rate.

Also, you want to avoid the area around the Florida Institute of Technology.

Crime maps back up what many say in travel forums regarding the high crime rates in these neighborhoods.

The beach portion of Melbourne is one of the safest areas when it comes to crime numbers.

Anything south of Eau Gallie (O-galley) could be getting into dangerous neighborhoods.

Safety Tips for Traveling to Melbourne

So... How Safe Is Melbourne Really?

That means any sway in actual crime numbers can change percentages dramatically.

There also arent’ a lot of crimes against tourists, as long as you don’t provide a crime of opportunity (see #10 above).

The high crime numbers also don’t take into account the tourist population throughout the year.

Here’s how the chances break down:

This is a town that is ripe with retirees and where some of the smartest people in the country live as they contribute to the space agencies.

This is also a town where gang members live and drugs are traded.

There were 8 homicides last year, which was a huge jump from only one the previous year.

In reality, it’s like any other city where there are good parts of town and the less desirable parts of town.

Be very careful when you are researching this city.

It can easily get confused with Melbourne in Australia, or Melbourne Beach/Village/West Melbourne.

How Does Melbourne Compare?