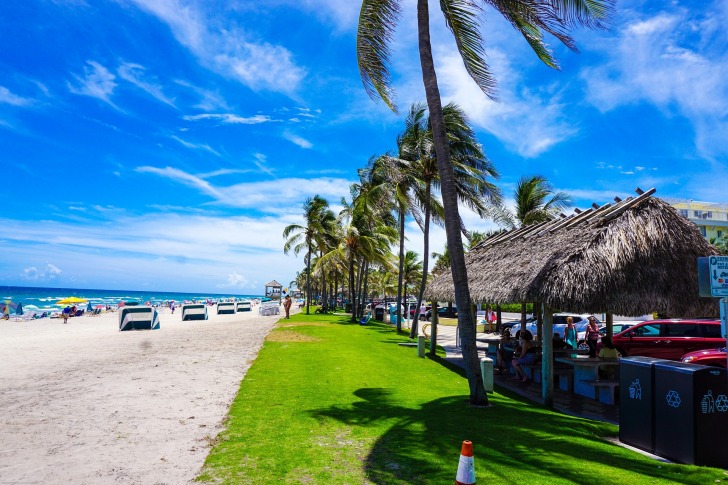 Choosing a city for a south Florida vacation isn’t easy.

There are nearly 100 miles of beach and dozens of cities along the coast.

What makes Deerfield Beach special is its clean reputation and family-friendly atmosphere.

This small town of 87,000 people gets big-time attention in many key areas.

The city earned the Blue Wave distinction from the Clean Beaches Coalition in 2020. It’s just one of seven Florida beaches to get the award.

This means the beach is “clean, healthy, and environmentally well-managed.”

Deerfield Beach is a place where you can surf in the ocean and inland (we’ll explain that one a little later on, but trust me, it’s worth it), a wooden pier that’s nearly 1,000 feet long, and some of the best Brazilian food you can get outside of Brazil.

Leave the big crowds of Miami behind and enjoy this slice of beach life in a location named for the deer that once roamed its shores.

There's an overall low risk in Deerfield Beach, especially when compared to some of its neighboring communities. Since it's not one of the most popular beaches in the area, it also gets less crime.

Deerfield Beach is considered part of the Fort Lauderdale metro area, and it's in Broward County. If you want to find a list of approved taxi services in the area, check out www.broward.org. You should be safe with any of those options. Rideshares are available as well, and there's the Deerfield Beach Community Bus Shuttle that goes to various parts of town. All of these options come with low risk.

There's a medium risk as the theft rates are higher than the national average at 1465 per 100,000. That's a one in 68 chance. That said, only 12 of the reported theft crimes were pickpocketing or purse snatching in 2020.

With hurricane season from June to November and the sudden storms that can pop up and get quite severe, we'll give this a medium risk. There are plenty of beautiful beach days to be had, but when the weather gets bad it can be extremely bad, especially if you aren't used to violent thunderstorms. The good news is that thunderstorms are usually short-lived. Hurricanes, on the other hand, can last days with the damage taking weeks or months to clean up.

There's a low mugging risk in Deerfield Beach with only 59 reported in 2020. That's 25% lower than the national average.

This is a highly-populated region with several major cities and ports of entry. That's going to make it a possible terrorist target. While there's no imminent risk, we're still going to call this a medium risk just based on the sheer size and possible devastation that could happen in a terrorist attack.

One of the most recent scams in town involves fake parking tickets being issued and the drivers being asked to pay for the ticket to an illegal company. Don't fall for it. Due to the possibility of scams in this area, where there are vulnerable tourists and a larger elderly population, we'll give this a medium risk.

This is probably one of the safest communities in the Fort Lauderdale area for women, giving it a low risk. There's not a big nightlife or party atmosphere here, so the common pitfalls of being a woman on vacation are lessened.

There's low risk with tap water. Not only does it meet or exceed the standards, but the water plan also won Most Improved Water Plan in 2019, and the 2020 Water Project of the Year, both for keeping up with the evolving technology and the challenges of providing clean water.

Every beach city has a pier, right?

So what is the big deal?

The Deerfield Beach International Fishing Pier is such a sight to see.

The 976-foot all-wooden pier is perfect for dropping a line over the edge to catch some fish or just strolling down pondering the meaning of life.

I was surprised when I saw there was a fee to get onto the fishing pier, but after reading dozens of traveler reviews they all said “It’s worth the $1 price to walk the pier.”

Ski Rixen USA is an inland waterpark with more adventure than just going down a slide.

There’s a wake park and an aquapark at Ski Rixen.

In the wake park, you can ride the water being pulled by cables—no boat needed.

It’s a unique experience with just as much excitement as if you were on the ocean.

The aquapark offers a playground on the water where you can test your balance and obstacle course skills.

Deerfield Island Park is an island getaway nestled in the beach community.

There are 43 acres to explore through mangroves and don’t be surprised if you see an alligator (from a distance).

There’s a ferry that takes you to and from the park.

Take a tour of the historic James and Alice Butler house to get a glimpse of pioneer life in Florida.

JB’s on the Beach is one of the popular beachside dining locations in town.

With 11% of the Deerfield Beach population being Brazilian, you have to try one of the many Brazilian steakhouses and restaurants.

For shopping, exercise your wallet at Mizner Park, where pink buildings stand out in the Florida sun and boutiques are around every corner.

Don’t miss the Italian stone fountain in the center of the park.

Places to Avoid in Deerfield Beach

Crime maps show the north-central part of the central city is the most dangerous.

Social media forums back this up, saying the Dixie Highway Corridor is a part of town to avoid.

There is a commercial and residential development project in this area to improve land use, add businesses, and create a better partnership with the community.

If you stay east of U.S. Highway 1 and west of Military Trail Road, you’ll be in the safer parts of Deerfield Beach.

The I-95 corridor through Deerfield Beach has some sketchy neighborhoods too.

Don’t go into these neighborhoods after dark.

So... How Safe Is Deerfield Beach Really?

There are some parts of town that crime numbers and local feedback tell us to avoid, like the I-95 corridor and near the Dixie Highway.

The tourist areas along the beach and inland are shown to be the lowest crime areas on crime maps.

Aside from an evening dinner, there isn’t much of a reason to be out at night in this community.

You shouldn’t wander around a strange city at night anyway.

The fishing pier is open until 11:00 p.m., but don’t go there alone at night because the walk back might be a little unsettling.

Of course, I’m super safety-oriented, so that advice comes in an abundance of caution, not because of an ever-present risk.

How Does Deerfield Beach Compare?