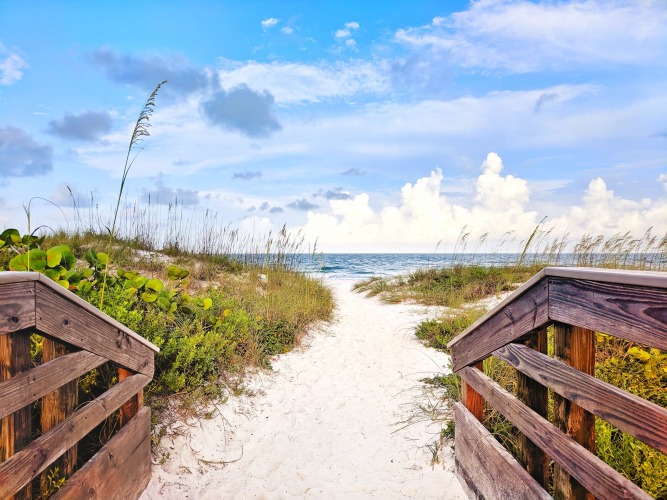 Bradenton, Florida, is part of the greater Sarasota metropolitan area, allowing it to ride the coattails of being one of the best places to live in the country.

This community is a little more casual and laid back compared to its sister city of Sarasota, which is more sophisticated and upper class.

The city of Bradenton itself doesn’t have any beaches but has plenty of waterfront activities along the Manatee River.

Nearby Anna Maria Island and Bradenton Beach are separate cities, but they are grouped into the wonderful activities offered in Manatee County.

Downtown Bradenton is a livelier part of the area, with restaurants and shops lining the streets.

The nearby riverwalk in Bradenton is a great place to stroll along the river.

This is a great place if you like fishing, too.

Bradenton offers a slice of life on the Suncoast in a relaxed atmosphere and good value for your money compared to pricey Sarasota.

There's an overall low risk in Bradenton, despite what you might find online. This was once said to be the more dangerous part of the Suncoast area, but there's been a community-wide effort to clean it up and draw in tourists. Crime is down for the second year in a row, according to Bradenton Police. FBI crime numbers show almost flat crime rates in 2019 compared to Sarasota.

There's a low risk here as all transportation is governed by city or state regulations, but you are probably going to need a car. Once you get out of the downtown area of Bradenton, you have to go over bridges and waterways to get to other sites. A good chunk of the city of Bradenton is residential.

There's a low risk in Bradenton, but we're going to bump it up to medium risk when in the downtown area or along the riverwalk, as that's where most theft crimes are prone to happen. You have a 1 in 50 chance of being a victim of theft here.

Most of the year there's a low risk, but during hurricane season and the stormy summer months, it's a medium risk since most of the activities you do in Bradenton require being outdoors.

There were only 57 robberies in Bradenton according to FBI data in 2019. This is a low risk—about one in a thousand chance of being a victim.

There are no known terrorism risks in Bradenton, so we're giving it a low risk. This is mainly a residential area with fishing communities and casual shopping and dining, nothing that would get unwanted attention from terrorists.

The scams that happen here are mostly via phone to residents, so there's a low risk of a tourist being scammed. Just be sure if you are renting a boat that you see a business license and all the proper safety gear. Never pay for something you can't visually inspect.

Women travelers have a low risk here but don't go walking the boardwalk at night alone solo. There are homeless people nearby and it's a growing area, so you never know who's going to be lurking there. Take that as more of a caution than a warning.

The tap water meets or exceeds all state and national requirements, so there's a low risk here. Do beware of potential water contaminants that can happen during a storm or after a sewage spill, but these issues will be noted by water authorities and shared with all local hotels and vendors.

Safest Places to Visit in Bradenton

Bradenton is mostly an adventure outdoors.

You can shop and dine in the downtown areas, but other than that, your activities will mostly be focused on the water.

A must-see in Bradenton is the Bishop Museum of Science and Nature, where you can interact with manatees.

The animals are known as “Sea Cows” and “Gentle Giants.”

There are also plenty of sea turtles to see here.

You can also rent a boat or paddleboard to explore the Manatee River.

There are boat tours you can take along the river and into the Gulf.

You’ll most likely find yourself heading to nearby Anna Maria Island or Bradenton Beach, where there are a plethora of exciting beach activities and even more dining beachside.

At Lecom Park, the Spring Training home of the Pittsburgh Pirates, always draws a crowd when it’s baseball season.

Places to Avoid in Bradenton

After dark, you’ll want to use common sense when it comes to safety.

The downtown area is lit well, but it’s easy to venture off the beaten path and end up in a dark neighborhood.

This is a city that comes to life during the day and gets much quieter at night.

The riverwalk can be foreboding at night alone, and homeless people group here, so enjoy that feature during the day as well.

Crime maps show the farther east you go in Bradenton, the higher the crime rates become.

North of Bradenton is Palmetto, where the crime rates are higher.

Safety Tips for Traveling to Bradenton

So... How Safe Is Bradenton Really?

It is a safe city by looking at crime statistics from the FBI and Bradenton Police Department.

The city is working to remove the reputation that Bradenton is the more dangerous part of the Suncoast community.

The city lies on 14 miles of coastline, so most of the activities here are water-related.

You’ll need to use boating and water safety guidelines whenever you are in the water.

The downtown area recently went through a renaissance with new restaurants and art installations.

Much of Bradenton is going to be on the water or downtown, the larger part of the city is mostly residential.

Even when you venture to Anna Maria Island or Bradenton Beach, you are still going into safe cities.

How Does Bradenton Compare?