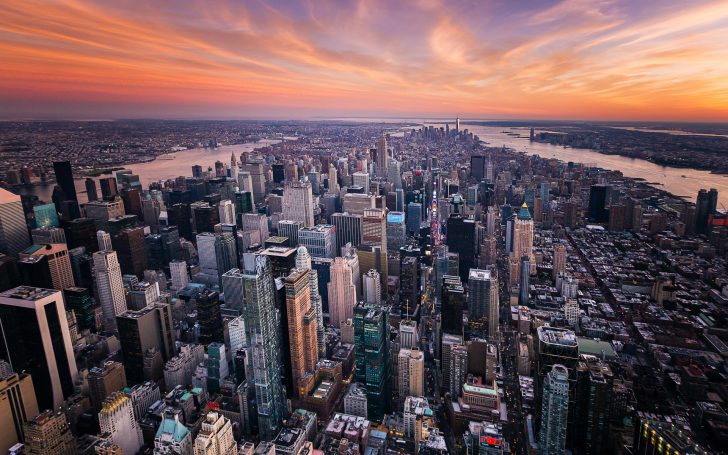 This dynamic metropolis is a cultural, fashion, and food melting pot with big businesses and even bigger penthouse homes.

NYC has five boroughs that each bring their own swagger to this incredible city.

Even within the boroughs, there are distinct districts to explore.

With so many options, where’s a tourist to start?

We will explore all the top safety advice and the best neighborhoods to explore.

The city has nearly nine million people, so you’ll need to prepare for large crowds, urban noise, and activity all night long.

For those looking for a quieter part of the city, Staten Island is the place to be.

If you want to be close to the main attractions, Manhattan is for you.

When you’re looking for a hotel to stay in, check out the NYPD Comp Stat Report on its website.

This shows each borough broken down into subsections and you can see the weekly, monthly, or year-to-date crime levels for major crimes and the percentage of increase or decrease.

There's a medium overall risk and some high-risk areas you'll likely not go to anyway as a tourist. As far as big cities go, New York is safer than places like Philadelphia, Chicago, and Detroit, but there's still plenty of danger in a city with nearly nine million people. You cannot take personal safety lightly here at all, but you also shouldn't be scared to visit one of the most dynamic places on earth.

MTA is the public transportation system here, and buses or subways are on almost every corner of the city. In 2022, there was a 41% increase in crimes on public transportation, causing some concerns for even local users. Some high-profile cases made it seem more dangerous than it is. If you do ride the subway or bus, stay as close to the driver or conductor as you can. Try to use the system during the day and avoid empty subway cars. There's safety in numbers. Homeless people can live on the trains, so keep your distance and stick to other people who seem confident and comfortable on the ride. Taxis are everywhere, but be sure you get a MARKED cab. Never get in one that isn't a marked and licensed cab. Rideshares are also available but aren't regulated as much as taxis. Rental cars are available, but the parking costs will be high.

The nearly 3,000 pickpockets and purse snatchings reported might be intimidating, but remember, this is a city of almost nine million people. Is there a high risk of being pickpocketed? Yes. Can you take smart steps to avoid it? Absolutely. Put nothing in your back pocket. 2500 of those thefts were actual pickpockets, so you're more likely to lose a wallet than have a purse stolen. Carry the bare minimum with you and if you do carry a purse, make sure it's a crossbody version.

Winters can be brutal in New York with bitter cold and heavy snow, but there's not always going to be snow on the ground. Hurricane season from June through November can cause problems, but you'll have plenty of notice if a tropical storm or hurricane is approaching. Severe thunderstorms and the occasional tornado are possible.

There's a medium risk here, and you can lower that risk by staying out of dangerous parts of town or less traveled areas at night. Don't walk through Central Park at night. Even the Financial District dies down after dark, leaving more criminals than safe spaces at times. If you feel like someone might be following you or about to corner you - run - as fast as possible and duck into the first business you see. If you are confronted, follow instructions and remember as much as you can. Call 911 as soon as the robbery leaves.

New York City has faced the worst of terrorist attacks and is still a proud and prosperous city. You can bet every law enforcement officer from the local level to the head of Homeland Security is making darn sure it doesn't happen again. It is critical for you to stay vigilant and report anything suspicious.

Scammers are always looking for a target on the streets of New York. Do your best to blend in and look like you belong there. Watch out for anyone who approaches you with a plea for help or a generous offer. Don't talk to anyone you don't know; just firmly say "No Thanks" and keep moving. NEVER stop. Avoid panhandlers, and don't pause. They might follow or become aggressive with people they think are on the verge of helping. This isn't scary - it's just part of being in a big city. Also, those people dressed like superheroes in Times Square? Don't tip them. They are just regular people who put on a costume and hope to get some of your hard-earned vacation money.

The sexual assault rate is actually quite low compared to other large cities. You still need to treat every neighborhood, every turn on every corner, and every crowd like there's medium risk. Don't walk around alone at night. Pay for the cab fare or ask a friend to pay for your Uber. Keep your mobile device charged in case you need it for emergencies.

The 2021 Water Quality Report is an easy-to-read breakdown of how water gets cleaned in New York City. Water is sampled more than three million times yearly from various entry points. The only violation reported happened during tropical storms, which should encourage you to check water quality anyway.

The official tourism website for New York City is nycgo.com.

This will give you the latest information from the convention and visitors authority and every group that is dedicated to giving accurate and timely information to tourists.

To get official information about tourism across New York state, go to iloveny.com.

For those who want to “be a part of it” and limit the use of public transportation, you can’t go wrong in Times Square.

The large crowds might seem intimidating, but it’s also a key draw for tourists.

You’ll see plenty of police officers and tourists, so you won’t feel like you are standing out in a crowd.

While you still need to watch out for pickpockets and scammers, you can feel pretty safe here.

Central Park is a safe place to visit during the day, but you need to know the layout of the park.

It can be easy to get turned around as this park is 840 acres large.

While you might see homeless people and shady characters, keep your focus on your surroundings, and don’t wear headphones or earbuds here.

You’ll lose the critical sense of noise around you and might appear to be distracted, which is just what criminals want to see.

The Brooklyn Bridge is another relatively safe attraction – and free as well!

The bridge has incredible security and surveillance and is used day and night.

If it’s a nice day, you might even be part of a very large crowd using it.

An average of 30,000 people cross the bridge each day.

There are also parks and attractions at each end of the bridge, so you’ll be doing more than just crossing the bridge.

You can visit the 9/11 Memorial and Museum in Lower Manhattan and the area has strong security and surveillance.

Of course, you want to respect the space and avoid any humor or loud conversations as others might be mourning the loss of loved ones.

The One World Observatory is the tallest building in New York, but it’s otherwise known as Freedom Tower.

This includes the Global Welcome Center and a history tour on the ride up in less than one minute.

You’ll get 360-degree views of New York City and all the boroughs.

It’s a good idea to review all of the boroughs and explore the distinct vibe of each neighborhood to see which one suits your tastes.

Be sure you know:

This is one of the hardest questions to answer because you’ll find information touting the South Bronx as the safest place to visit and then other information saying it’s a place to avoid at all costs.

Areas of New York that should be avoided are different than they might have been two years ago and could be different in two more years.

Those CompStat reports from the police department will really help you get a handle on the places to avoid closer to your visit.

Even Greenwich Village, known as a home for upscale living and shopping, is getting a bad reputation for crime, according to an August 2022 New York Post article.

CBS New York reported that same month that the West Village and Greenwich Village had seen the largest spike in crime across the city and all boroughs.

All crimes that could impact a tourist were up at least 39%, with grand larcenies seeing a 100% increase.

For those who want to enjoy the nightlife, review the New York City Office of Nightlife to review crime and safety reports from across the area.

You can also learn safety tips and tricks for dining out, hitting a nightclub, and getting home safely.

You should never walk around at night on dark streets or in alleys.

Stay in populated areas and use taxis or rideshares as much as you can.

Don’t talk to people on the street, even if they seem nice and friendly.

You never know when someone is distracting you, so another can pick your pocket or slide a hand into your purse.

So... How Safe Is New York City Really?

There are two stories for NYC right now.

One says it’s among the safest large cities in the world.

Another says there’s a rampant rise in crime, and it’s so dangerous even the former Governor says he doesn’t feel safe here.

As with all two-sided stories, the truth is in the middle.

The people who love it wouldn’t have it any other way.

If you don’t like large crowds, pushy people, or loud atmospheres, you might feel anxious on top of scared in some areas.

If you are confident and can handle yourself in any situation but also know when to back down, you’ll be able to handle the majority of the neighborhoods here.

Looking at the 2021 crime data, the violent crime rate wasn’t anywhere near cities like Chicago and Detroit, but there has been a surge of different crimes in specific areas as of September 2022.

The NYPD is very visual throughout the city, but you also have to take excellent steps to protect your personal safety.

The biggest risk of crime here, assuming you have good situational awareness and common sense, will be random crimes – which can happen anywhere.

You should do all you can to NOT look like a tourist.

That could make you vulnerable to pickpockets and scammers.

Keep your mobile devices as invisible as possible, especially when waiting for or sitting on a bus or train.

New York City, with all its current challenges, is still a safer place than it was 20 or 30 years ago.

How Does New York City Compare?