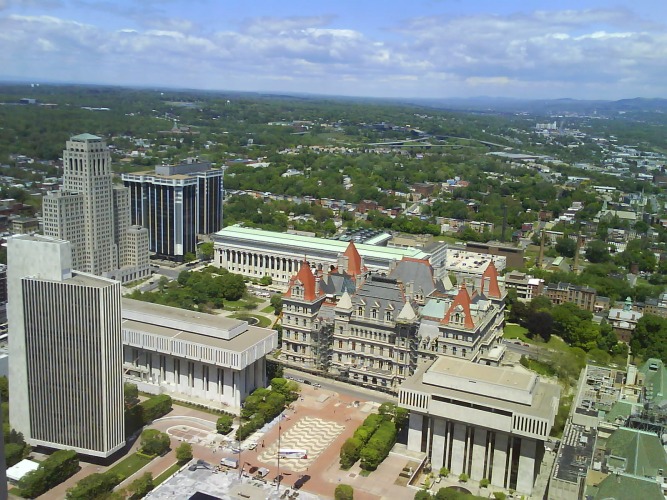 Albany, New York, is a great location to experience the state’s history with a jaw-dropping state capital building and the modern culture of art and performances.

There’s a blend of old-style architecture and modern buildings towering on the skyline.

Location is everything, as Albany is about halfway between New York City and the Canadian city of Montreal.

It also sits along the Hudson River and brings a slew of recreational activities during every season.

However, you’ll have to like snow to visit here in the winter.

Many wonder why New York City lost the title of State Capital to Albany, and the answer is simple – leaders wanted to have a centralized location and spread the wealth across the state, not just put EVERYTHING in New York City.

Albany is still guided by its original city charter and is the “oldest continuous settlement” of the original 13 colonies.

All the history here doesn’t stop the city from becoming a distribution and technological hub in the future.

While researching the city might be challenging because there are 24 other cities in the country and 10 more in the world named Albany.

This one is named after the Scottish “Duke of Albany.”

While most searches online will default to New York’s Albany, it’s important to double-check so you aren’t making reservations in Albany, Georgia, or anywhere else.

Albany is also home to a lot of ” firsts” – the first use of Santa Claus in a holiday parade, the first toilet paper roll that came in squares, and the starting point of the first railroad for passengers in the country.

While this is the sixth-largest city in New York, there's a low risk, but you'll need those basic personal safety tactics when you visit. There's a lot to do in the city, and surrounding Albany County offers many other options.

The Capital District Transportation Authority, or CDTA, is the public bus system. There's an app you can download to pay for fares and check your routes. It's easy to call a taxi or rideshare, and plenty of rental car options are available. There's a low risk but think twice about a rental car if you don't like driving in winter snow. An all-wheel drive or four-wheel drive vehicle will be ideal. Amtrak can also take you to New York City, Montreal, Niagara Falls, Chicago, or Boston, just to name a few cities.

Two pickpockets were reported among the more than 2300 thefts in 2021, which is a low number comparatively. Part of that is due to personal safety steps, so always limit what you bring with you and how visual you let your wallet or purse be when walking around.

The biggest risk is in the winter when extreme cold and snow storms are common. Winter storms here are usually fueled by Nor'easters, which can dump snow in feet, not inches. There are thunderstorms and flooding possible in the warmer months, and the flood risk also goes up with the Hudson River nearby.

The robbery rate is nearly two and a half times lower than the national average, so that's a low risk. If you stay in the tourist corridor and the historic areas or the capital part of town, you'll be safer. You should never let your guard down in any city.

There will be a medium risk here since a physical, chemical, or cyber attack could impact hundreds of years of history and the confidential information held in the state government. There's also a large Homeland Security focus on keeping Albany safe. You can always call the New York State Terrorism Tips Hotline at 1-866-723-3697 (1-866- SAFE-NYS) if you have concerns.

Albany has a lot of scams reported, with a rising number of rental scams. The scams really focus on people living locally but know the hallmarks of a scam operation. First, they are "too good to be true." Second, there's a sense of urgency to "act now" under threat or duress. Third, you are asked to wire money or purchase gift cards as payment for something.

Albany is a city with safe pockets of town, and within a five-minute walk, the neighborhood might be more dangerous. You should always use standard safety practices, like don't walk around at night alone, staying in well-lit areas, parking near security cameras, and don't be distracted during your travels. The sexual assault rate is lower than the national average, and there's no reason to worry about being in constant danger.

The 2021 Water Quality Report shows no violations, and all standards were met or exceeded. Even among categories that were within the acceptable range, the city is taking steps to make those levels even lower. A consumer awareness program is also underway to help people with old pipes replace them, as the pipes contribute to higher levels of lead in the water.

Safest Places to Visit in Albany

The New York State Capital Building is almost hard to resist once you get a glimpse.

It is well-known as being one of the most stunning capital buildings in the country.

There’s also a million-dollar staircase inside.

Free tours are held on weekdays, and it’s not just all “boring government stuff.”

You’ll get to hear haunted stories of the two ghosts that allegedly roam the building.

The Empire State Plaza is the second “must-see stop.”

No, this isn’t where the Empire State Building is, that’s in New York City, but the Plaza is a destination in its own right.

Here you’ll find art museums, the State Museum, the “Egg” (a performing arts hall), an observation deck more than 40 stories up, and the art sculptures around the plaza.

One of the top tourist attractions in Albany year after year is Dutch Apple Cruises.

These sightseeing tours take you up and down the Hudson River with food and entertainment.

The average cruise runs 90 minutes, with half of that time being an announcer-led history lesson, and the rest of the time, passengers can do whatever they want.

As you wander, you might see a giant dog looking down on you in a warehouse district.

That’s Nipper, the RCA dog, an icon from a bygone era but still proudly standing and overlooking the city.

Cherry Hill is a home that’s another Albany icon, and visitors will love the newly refurbished look that is still rooted in its deep history.

Keep an eye out while visiting because there are more than 70,000 items and artifacts to see.

The tourism bureau here offers walking tours or lectures that run the gamut from historical tours to the romantic stories of the capital city to the famous writers who called Albany home.

You can also take several self-guided walking tours, including a Hamilton Tour that puts you in the footsteps of the founding father.

Downtown Albany and the Warehouse District are the best places for a night in the town.

There’s a strong craft beverage trade here, and you can grab a map of the “Beverage Trail” to try the most popular.

Check out the schedule at The Egg or Palace Theatre for some great entertainment year-round.

Places to Avoid in Albany

The neighborhoods along I-90 have the highest crime rate, and the interstate cuts right through the city’s center.

Once you are past the intersection with I-87, the risk goes down.

For a large part, Albany is one of those cities where if you don’t go looking for trouble, you won’t find it.

What is always interesting about researching a specific city’s safety is that for every high-crime neighborhood, one person will tell you to avoid it at all costs, and another will tell you that they’ve lived there for three decades and never had a problem.

Another interesting part of the crime distribution data in Albany is that the downtown area – usually one of the more dangerous areas of any city – is actually among the safest here.

Albany is a city where a little thing like a blizzard with a foot of snow isn’t going to slow people down.

However, if you aren’t used to walking or driving in snow, review snow safety.

Don’t be one of those people who only cleans the windshield of a car, leaving the foot of snow on top to blow off going 60 mph on the interstate.

If you can’t drive in the snow, use public transportation or rideshares.

Safety Tips for Traveling to Albany

So... How Safe Is Albany Really?

Some of the smaller cities haven’t provided data beyond 2020, but Albany Police released year-end data from 2021.

While your research might show some other websites claim this is one of the most dangerous cities in the state, my calculations (which I double-checked) don’t really line up with that.

I say that to punctuate that we collect the most recent data, even when it takes more of an effort, and don’t rely on old, more convenient ways to get information.

While there is a lot of crime in Albany, not a single category relevant to a tourist is above the national average.

The 2021 data shows the major categories were actually below national averages.

Homicides, assaults, robberies, and thefts were all down in a year-to-year comparison against 2020 data.

Sex offenses increased by more than 50% but are still shy of the national average.

One thing that stood out to me was an increase in human trafficking, with seven cases in 2021.

If you suspect any human or sex trafficking, you can call the National Human Trafficking Hotline at 1(888)373-7888.

The text program is translatable to hundreds of different languages.

Albany brings a wide variety of options for a tourist, and while you’re going to enjoy the staples, be sure to enjoy some local food options and shop locally when you can.

How Does Albany Compare?