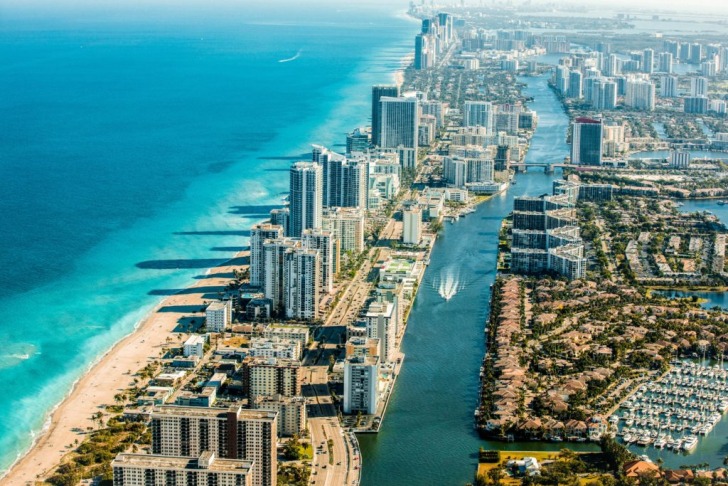 Fort Lauderdale is a coastal city on the Atlantic Ocean in the US state of Florida. It is known as the “Venice of America” due to its expansive canal system.

The city is most famous for its beaches and boats, and while the city of Fort Lauderdale is relatively small in area, the term ‘Fort Lauderdale’ is often used to refer to the more massive metropolis that has grown up around it.

The city attracts tourists with the possibility of air walks above it and the observation of amazing views.

As well city beaches attract tourists and offer activities on the water such as boat trips, sailing and more.

Fort Lauderdale is not the safest city in the United States, but if you follow the usual precautions, you can travel here safely and comfortably. Avoid certain areas of the town and do not mess with criminal groups to avoid trouble.

Public transport is of medium security; during rush hours, you can find pickpockets there. It is better to take a taxi and water taxi. There are many of them, and they are licensed. Make sure that you choose the licensed taxi service.

Pickpockets here operate more for entertainment than for profit. However, tourists and their things always attract pickpockets more. Watch your pockets and bags, especially in crowds and in crowded places. Leave valuables in the hotel safe.

The city of Fort Lauderdale is most vulnerable to hurricanes, tornadoes, and floods. Before traveling to this city, tourists need to study the weather conditions and the situation from reliable sources to avoid the risk of natural disasters.

Unfortunately, armed robberies and attacks on tourists at Fort Lauderdale are not uncommon. Most often, they occur in parking lots or disadvantaged areas of the city. Try not to walk around the town alone late at night and do not shine with valuable things. If you were attacked, give the criminals everything they require and then contact the police.

The risk of terrorism is quite high. Because the United States itself is often subjected to terrorist attacks and the city also has a reputation as a target for terrorist attacks. Avoid mass gatherings of people and massive demonstrations. Learn the political environment of the area before your trip here.

Most fraud is associated with an attempt to deceive a person and find out his data and his card details. So you can be given flyers, SMS or calls that you won in some lottery. Make sure that you do not pass on your passport and credit card details to third parties.

Women traveling solo can be safe if they adhere to specific measures: do not walk around the city late at night, do not get drunk in bars, do not attract too much attention to themselves with their outfits or decorations.

So... How Safe Is Fort Lauderdale Really?

However, Fort Lauderdale is not the safest city to travel.

The crime index here is average.

Most of the problems are related to the theft of things, car theft, insults, violent crimes.

Another big problem in the city is drug trafficking.

There are some parts of the city that tourists should probably avoid if you are walking at night.

Areas frequented by tourists, such as along the beach, shops along Las Olas, and the city center, are generally more than safe.

However, you can be very careful if you are in the west, northwest, or southwest of a city, especially at night.

Rental cars stand out as obvious targets for thieves, so never leave valuables in a conspicuous place (put any purchases or valuables in the trunk) and always lock the doors of your car.

Taxis and water taxis are more preferred if you return to the hotel late at night.

Remember that any contact with drug dealers and prostitutes – which can be found on the streets of Fort Lauderdale – is illegal in this city.

Do not get involved in street showdowns and do not walk in low-lit and remote areas of the city.

How Does Fort Lauderdale Compare?