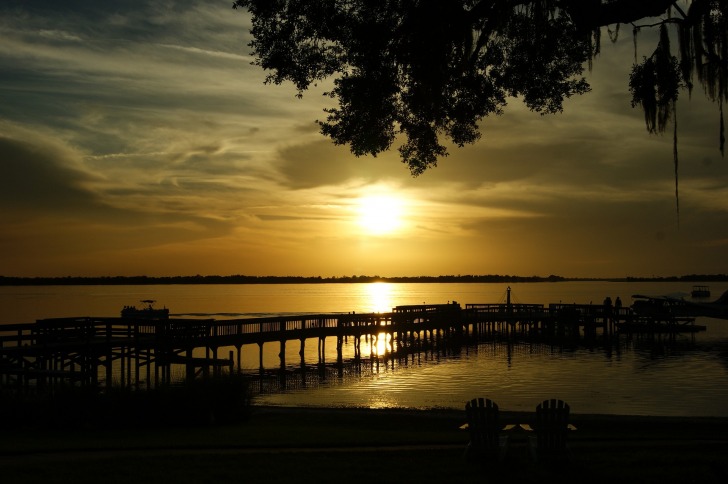 I’m going to resist all urges to make Dora the Explorer jokes while telling you about Mount Dora, Florida.

This city is as charming as the antiques sold throughout the area.

It’s part of the Orlando area, and in a location known for crowds and innovation, it’s nice to enjoy Mount Dora’s slower pace of life and southern charm.

It’s known as Festival City for all the events it holds throughout the year.

In reality, there are just 8 festivals, but I guess that is a lot for a small town of 16,000 people.

This is as much of a mountain town as you’ll get in Florida.

The “mount” in Mount Dora is 184 feet above sea level.

It’s not the highest point in Florida (that honor goes to Britton Hill up in the panhandle at 385 feet above sea level).

No worries about altitude sickness here.

There's a low overall risk. The crime statistics are low across the board, aside from one category. However, in a city this small, it only takes a few extra crimes to skew the percentages.

You can hail a cab or get rideshares here with no concern. There's a low risk as all the rides are regulated by the city and/or county. I've got the giggles as I'm writing this and I hope my confusion is worth the clarification it brings for you. When you search for "Mount Dora transportation", it's going to keep taking you to a pontoon boat or electric cart tour. I thought I was clicking on the wrong thing. I tried it no less than three times before I got frustrated, but I finally got the answer. In what I'm sure is, in part, an SEO power play, there IS a "Mount Dora Transit" system connected to a company called Rusty Anchor Mount Dora. This is a tour company. If you are looking for public transportation, go to Lake Xpress, which is the bus route for Lake County which includes a Mount Dora route.

There were 389 reports of thefts in 2020 and only two were pickpocketing, so there's a low risk. Don't let your guard down, but you also don't need to hold on for dear life.

Just because Mount Dora is in the middle of Florida doesn't mean it's immune to hurricanes. The storms can still pack a punch even after they hit land. While the storm would likely be much weaker in this area, it could still bring heavy rains, strong winds, and flash flooding. Thunderstorms and tornadoes are also a risk. Due to those factors, we'll call it a medium risk.

With just five robberies reported in 2020, we'll call this a low risk. One of those robberies was against a tourist, so there's always a small chance. Just avoid making yourself a crime of opportunity by keeping cash well hidden.

We know Orlando could be a hard target for terrorists, so we'll call this a medium risk here. There isn't any threat in the actual city of Mount Dora.

Several scams are targeting Mount Dora residents, the garden variety type, but there's a low risk of a tourist scam. In what I think is one of the oddest scams I've ever heard, in 2019, police warned about a scam call that was asking the person to visit a certain website or else bombs planted in the area would blow up. A portion of the call says "To stay alive.. visit this website..." I guess I'm just going to have the giggles throughout this whole article.

Women are safe in Mount Dora. There's nothing in the crime numbers that indicates a woman is any more at risk. It is a small town, but that means dark, unlit areas at night, so just don't go wandering around after dark and you'll be fine. There's a low risk.

The water is safe for drinking and bathing. There have been 4 violations in the past nine years, but none since 2019. The water meets or exceeds all safety standards, giving it a low risk.

Mount Dora was ranked #25 of the Best Small Towns in America by Best Choice.

The city is shouldered up against Lake Dora and is home to one of just three inland lighthouses in the state.

Much of what there is to do in Lake Dora is centered around the lake.

There’s the usual fishing, boating, kayaking, and wildlife viewing, but what about a seaplane tour?

The lighthouse is located in Grantham Point Park on the east side of Lake Dora.

From there, you can either walk to the Palm Island Nature Preserve for more outdoor activities or you can head to the historic downtown area.

The downtown area is filled with small-town charm and one-of-a-kind stores with everything from trinkets to antiques.

There are plenty of restaurant options as well.

The Donnelly House is worth a visit for an Instagram photo as it’s the most historic home in Mount Dora.

There aren’t scheduled hours for tours and it’s hit or miss if it’s open, so call ahead of time if that’s a dealbreaker.

Places to Avoid in Mount Dora

I can’t find a single statistic or complaint from anyone in Mount Dora about places to avoid.

Looking at crime maps, the east side of town has more crime than the west side of town but knowing how small the crime rate is, that doesn’t mean much.

This is a city that comes to life during the day.

Even the festivals that happen year-round are scheduled mostly during daytime hours.

There are a few nightspots, and a ghost tour, but other than that, nightlife lovers should head to Orlando or go to bed early.

That’s a great reason to get up and enjoy the Florida sunrise and enjoy a mom-and-pop breakfast eatery.

If you go kayaking at King’s Landing, bring a GPS and compass so you can keep track of how far you’ve gone and what direction to go to get back.

There are a few places you can get a little turned around.

You also have to go back the way you came to get to your car as this area doesn’t form a loop.

So... How Safe Is Mount Dora Really?

The crime rates are low, aside from the larceny rates.

However, with just 389 reported, and the bulk of those being shoplifting, the number isn’t too concerning.

Here are the chances of being a crime victim in Mount Dora.

Those chances could go up during one of the busy fairs and events that happen throughout the year as larger crowds bring more risk of petty theft.

As long as you follow standard safety steps, you shouldn’t have too much to worry about in Mount Dora, Florida.

How Does Mount Dora Compare?