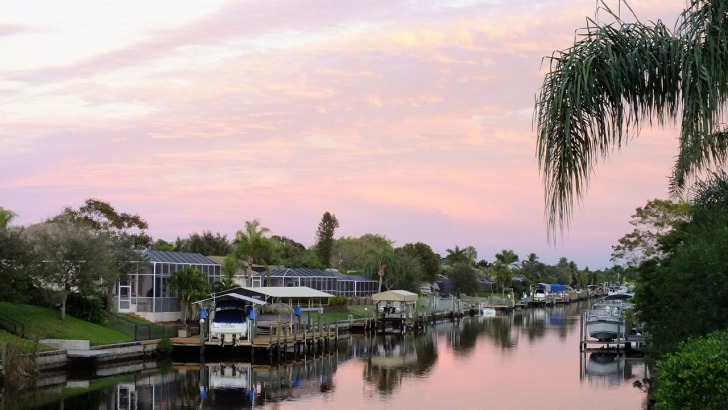 The causeway and the surrounding road that is the only way on or off Sanibel and Captiva had a large piece missing, and roads on both sides were buckled or washed away.

It could be 2023 or later before the repairs are made to allow tourists to this area.

Fort Myers Beach is called “Ground Zero of Devastation,” but the local sheriff and almost all buildings were ripped to shreds.

No estimates have been given for repairs because the recovery is still ongoing in October of 2022.

You don’t need to go to Venice to enjoy a city full of canals.

There’s one right on the west coast of Florida in Cape Coral.

Once touted as a “waterfront wonderland,” this city has grown to be one of the favorite family-friendly destinations in the state outside of Orlando.

This is one of the fastest-growing cities in America.

It’s not hard to see why.

Water sports fill every nook and cranny through neighborhoods, parks, and preserves.

The nightlife is almost as fun as the day life.

The shopping is impeccable and foodies turn out in droves to sample the cuisine diversity of this town.

In a state where snowbirds are financial drivers, Cape Coral escapes the reputation with half the population being under 44 years of age, and there are more people under 16 years old than over 65 years old.

It’s designed for families to live, which makes it a great family vacation destination as well.

The crime numbers are just as inviting.

Cape Coral has the third lowest crime rate in cities with more than 150,000 people and all crime categories fall well below the national average.

LeeTran busses take you to many different routes throughout Lee County, which is where Cape Coral is located. To improve the carbon footprint, some of the buses are now hybrids. Taxis and rideshares are regulated in this community. There's a low risk of using this type of transportation, but a car is advisable as getting to and from the beach can quickly rack up fees.

There was one purse snatching in all of 2020, and no pickpocket reports, giving this a low risk. More than 400 of the larceny reports were from automobiles, a good reminder to keep valuables out of plain sight in your car.

Cape Coral has seen the impact of several hurricanes, either directly or getting sideswiped by what's called "the dirty side" of the storm (that means the side with the most rain). When tropical weather is approaching, since Cape Coral has so much water, the entire city gets evacuated. There's a high risk when a hurricane or tropical storm is approaching, but otherwise a medium risk for the summer thunderstorms and intense rain, winds, and lightning they bring.

I double and triple-checked this, but there were only 20 robberies in Cape Coral in 2020. That's among the lowest risks I've seen in my travel research. There's a 1 in 9700 chance of being a robbery victim based on the numbers reported to the FBI.

There's no big terror risk in Cape Coral. There are no hard targets or military bases nearby. The only risk might be the nearby ports, but even that is a stretch given the more prominent ports in Florida. There's a low risk here.

Rental scams are always a risk in Florida, so we'll call that a medium risk. When renting a place to stay, you need to make sure it's a locally licensed location. Ideally, reach out to a local travel group to help you so you know they are legitimate. Never, under any circumstances, wire money ahead of time to secure a rental.

There's a low risk for women here. Nothing in the crime data suggests women are more likely to be a victim than anyone else.

There's a low risk here (unless a hurricane is coming). The tap water meets or exceeds the standards in "appearance and safety", according to the latest water quality report by the Cape Coral city government. When a hurricane is coming or after it hits, water quality can be impacted by flooding. A boil order will be issued when this happens. If you are in Cape Coral during hurricane season, which is June - November, stock up on bottled water just in case.

The Four Mile Cove Ecological Preserve is worth it for the mangrove walking path where you see wildlife through a tunnel of trees poking out of the water.

You can rent a boat to explore the 400 miles of canals (that’s the most of any city in the world!) or ride on the Caloosahatchee River.

To get the Florida beach experience, you’ll need to drive about 15 miles to Sanibel Island, which could be a whole article in its own right.

Downtown Coral Springs is filled with daytime dining and shopping, then comes to life at night with several nightclubs in this area.

It’s a 28-foot tall statue, once the mascot for a local grocery store, and now part of the fabric of Cape Coral’s community.

Places to Avoid in Cape Coral

In a city that is growing so fast, the good and bad neighborhoods can change quickly.

New developments keep popping up, so some of the older neighborhoods get a bad rap just based on appearance.

The Cape Coral Police Department has a crime mapping option on its website.

You should check it out before your trip to see what kinds are trending in what neighborhood.

Since the city population is just exploding, there isn’t that historically “bad part” of town to avoid.

You do want to avoid going on private property to access a canal or boat ramp.

So... How Safe Is Cape Coral Really?

The crime rates are low and getting lower, even as more people move to the area.

The biggest safety concerns are in the water with the algae blooms and alligators.

An approaching hurricane is going to get the city evacuated fast.

Look at the Lee County Government website so you know which evacuation zone you’ll be in.

Anywhere near the water is going to get evacuated first and then the zones move inland.

How Does Cape Coral Compare?