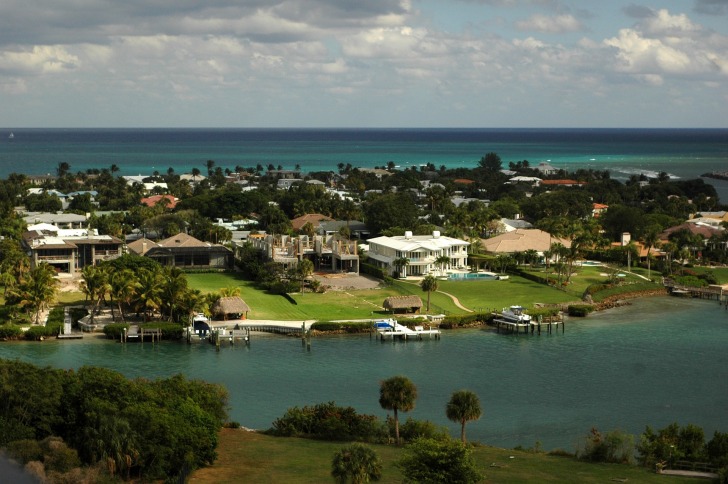 With its signature red lighthouse peeking up above the treeline, this is a small town close to the big city offerings.

There’s no celestial secret in how Jupiter got its name.

It came from bad phonetics and language confusion in the 1760s.

The Spanish named the area Jobe in honor of the natives.

Then the British took over this area and took their English meaning of Jobe and transitioned it to Jupiter, a Greek God.

Jupiter is the spring training home of the Florida Marlins and the St. Louis Cardinals.

This is also a golfers’ paradise with some of the top PGA golfers calling it home.

There are dozens of golf course options in and around Jupiter.

By land, sea, or river, there’s a lot to do in Jupiter without losing the small-town feel.

There's low risk in Jupiter. The city's crime numbers are nothing to be too concerned about, either at or below the national average. There aren't gangs or drug lords like some other Palm Beach County cities.

Both Palm Tran and Tri-Rail run the span of Palm Beach County and Jupiter on both routes, so you can either take a bus or a rail line to get around the county. There are rideshares and taxis available in town and the city even has a program called Ride Safe Jupiter where you can get a discounted rideshare home if you've had too much to drink. Download the app for more information. While there are all low-risk options, having a car in this area is a bonus.

There's a low risk. There were no reports of pickpocketing or purse snatching in 2020. While the theft chance is one in 110, most of the thefts involved automobiles or auto accessories.

Jupiter faces a hurricane risk from June through November each year. There are also summer thunderstorms that heat up. These storms can pop up rather quickly and be intense before disappearing from radar and the sun comes back out. Due to the intensity of these dangers, we'll call it a medium risk, but an average day is going to be blissfully beautiful.

There were just 13 robberies in 2020 but half of them were against travelers. So there's not a huge concern, but don't let your guard down. There's a low risk it's going to happen to you.

There's a low risk in Jupiter. While the Miami metro area is always considered a possible target, Jupiter is quite far away. There's nothing in the city that would interest a terrorist unless they had a hatred of red lighthouses.

Many of the scams I found were targeting locals, so there's a low risk for tourists. There is concern about a rental scam, especially if you are visiting around the popular Spring Training season. People will post fake ads for rental homes at discounted prices. They ask for a deposit and when the traveler arrives there's no home to stay in and the money is gone. Be sure you are using a licensed rental agency for your trip.

I was a single 43-year-old woman who spent several weekends here as I'm an avid St. Louis Cardinals fan. I never once felt unsafe, and I ventured out day and night. There were 10 rapes reported last year, which makes it a little higher than the national average. One reason I felt safe was I researched the heck out of the city and I knew the safe places to go, so hopefully, this article will help you on your travels. Do the same and you'll have a low risk.

The Jupiter tap water has been honored several times over the past decade with the Safe Drinking Water Act Excellence award. That's a low risk and all water meets or exceeds required standards.

Safest Places to Visit in Jupiter

The Jupiter Lighthouse is a great spot to start.

The once brick lighthouse was painted red after environmental factors distorted the color.

The red color helped sailors at sea by day know the lighthouse was Jupiter by its bright color.

The tour here includes a look at the lightkeeper’s quarters, some historical artifacts, and a climb to the top.

The area around the lighthouse is a federally protected piece of land offering kayaking and waterside activities on the Loxahatchee River.

Roger Dean Stadium is the Spring Training location for the big leagues.

Miami and St. Louis teams call this ballpark home in February and March.

Nothing stands out about it.

One great thing, however, is that during spring training you can get up close to the players.

You are just a few feet away from them.

It’s like watching a little league game but with MLB players.

The Busch Wildlife Sanctuary is a great place to visit and see endangered animals that have been injured on their road of rehabilitation.

The sanctuary is free, but donations are appreciated.

Check their schedule before you go to see if there’s an interactive animal program happening while you are there.

Harborside Place is a nice shopping and dining area with a Wyndham hotel in the center.

I’ve stayed here several times and I love this area.

There are water views in every direction, and a casual or fancy dinner is just around the corner.

You can also see the lighthouse from here.

Jupiter Beach is great because it’s not overdeveloped with all kinds of stuff going on all the time.

It’s a quiet beach and the south end is an off-leash dog beach.

Places to Avoid in Jupiter

This is a safe city.

There are no bad neighborhoods or places to avoid.

As long as you use common sense, you shouldn’t have to worry.

There is no downtown area in Jupiter like you’d expect in most towns.

Next to Roger Dean Stadium is Downtown Abacoa.

While technically not part of Jupiter city, it’s right next door and it’s the nighttime hot spot.

Crime maps show this is one of the most crime-ridden areas, but that’s not surprising considering this is the focal point for a small town.

There is a big parking garage here and those always give me the creeps, but I’ve walked through this one alone with no problems.

I did go to Jupiter Beach to watch the sunrise and saw a few homeless people around.

They didn’t bother me and I didn’t talk with them.

I also kept my distance and stayed close to my car.

Safety Tips for Traveling to Jupiter

So... How Safe Is Jupiter Really?

It’s very safe, especially when you compare it to other cities in Palm Beach County.

The crime numbers are well below the national average and people here are as friendly as I’ve ever met.

Especially if you are a baseball fan, you’ll have plenty of fellow fans to talk with while you wait for the game to start or when enjoying an after-game drink.

To show you just how low the crime numbers are, here’s the chance of you being a victim of a crime in Jupiter, Florida.

You almost have to be flashing money while inebriated, and being hostile to be a victim of a crime here.

That doesn’t mean you should let up on common safety precautions like locking the car when you leave it, putting valuables out of plain sight, keeping your valuables close, and carrying a small purse or wallet when out and about.

I have a whole special “you aren’t going to rob me!” collection of purses just for when I travel that are small, compact, and crossbody.

How Does Jupiter Compare?