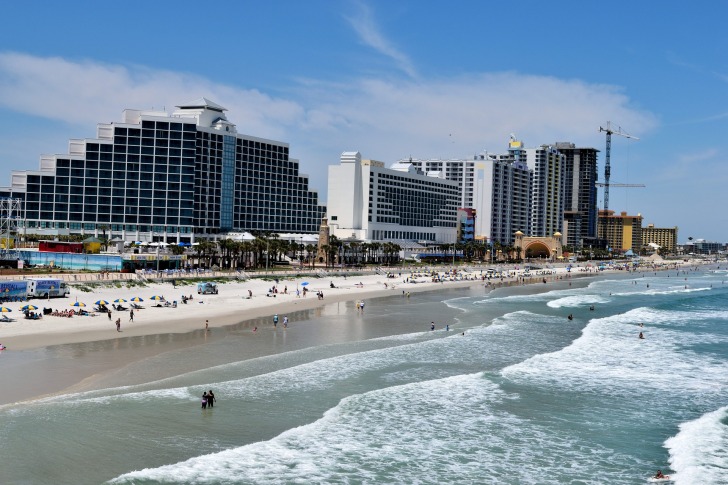 No trip to Florida would be complete without a visit to Daytona Beach.

“The World’s Most Famous Beach,” after all, boasts some of America’s most iconic places.

The city, known for being home to Daytona International Speedway, hosts the famous Daytona 500 NASCAR race every February, attracting tens of thousands of fans.

Characterized by hard-packed sand on which people can drive, Daytona’s beaches give visitors an array of things to see and do.

In addition to arcades and rides, the boardwalk has the Daytona Beach Bandshell stages, where people can catch year-round concerts.

Only a few steps away, Daytona Lagoon, the city’s water park, and family entertainment center, gives visitors the chance to compete at go-karting, laser tag, and mini-golf.

Tourists who visit Daytona in March or October might catch a glimpse of the semi-annual 500,000-people event known as Daytona Beach Bike Week — another event that makes Daytona charmingly unique.

During this 10-day event, bikers from all over the country gather for street festivals, motorcycle races, parties, and concerts.

Daytona Beach is well known for being safe for visitors. The city is in the 64th percentile for safety, meaning it’s safer than 64% of cities in the US. Daytona Beach has a crime rate of 21.63 per 1,000 residents per year, and people who live in the metro area typically consider the north portion of the city to be the safest. Given these findings, Daytona Beach has a low overall risk for visitors.

There’s not much information about transportation and taxi safety in Daytona Beach. However, according to King’s Transportation Group, one of the city’s largest taxi companies, this company offers a “no felon” policy, meaning all Yellow Cab drivers have a clean background history. They’re also licensed with the City of Daytona Beach. With this information, it can be concluded that Daytona Beach has a low transport and taxis risk.

Although not much is known about pickpocket statistics in Daytona Beach, the city has a higher-than-average larceny rate, according to 24/7 Wall Street. Well-known examples of larceny include pickpocketing, bicycle theft, and shoplifting. In 2019, there were 2,213 larceny thefts in the city; this translates to 3,169 thefts for every 100,000 people. This bit of information indicates that Daytona Beach has a medium-to-high risk when it comes to pickpockets.

With scores of hurricanes being reported in the city since 1930, Daytona Beach is considered a high-risk zone for hurricanes. The largest hurricane was Ginny in 1963, and the most recent one was Dorian in 2019. However, because casualties from these events are rare, Daytona Beach has a low-to-medium natural disasters risk.

No information about mugging specifically is available, but Daytona Beach has a robbery rate of 1.06 per 1,000 residents. Compare this to the national average of 0.73 per 1,000 people. These statistics show that Daytona has a medium-to-high mugging risk.

Terrorist threats have been made in Daytona Beach as they have in most other US cities. But no terrorist attacks have been carried out. The most recent threat was in December 2021 when an Embry-Riddle Aeronautical University student threatened to shoot up his university during finals week. A couple of his classmates alerted campus officials, thwarting his plans. Since no terrorist attacks have taken place in Daytona Beach, it can be deduced that the city has a low terrorism risk.

No recent reports about scams involving tourists in Daytona Beach can be found; however, there have been scams against residents of Daytona Beach and its surrounding areas. The majority of scammers have targeted elderly residents, calling them over the phone for “help” and asking them to wire tens of thousands of dollars. In the majority of these cases, the scammers have been arrested and put in jail — or police have issued a “Be on the Lookout” alert for the scammers.

According to the Environmental Protection Agency’s (EPA) ECHO database (July 30, 2018 to Sept. 30, 2021), Daytona Beach had no violations of the Safe Drinking Water Act. Its last violation was resolved in January 2014. Therefore, Daytona Beach’s tap water risk is low, meaning that the city’s tap water is safe for drinking and usage.

Residents of Daytona Beach generally consider the north part of the city to be the safest.

A person’s chance of being a crime victim in the north can be as low as 1 in 76.

By and large, the city is considered safe for tourists and residents alike.

Since tourists usually frequent the city’s beaches (along with its boardwalk and the nearby Daytona Lagoon), NASCAR race track, and shopping centers, it can be concluded that these places are safe for tourists too.

Spring break in March and April does tend to bring large crowds to the city.

Although spring breakers do generally abide by the law, they have been known to get loud and rowdy at times, which can be a source of concern for tourists with young children.

Tourists who have young children with them should be aware of the nature of the crowds and events during the March and October Bike Weeks.

Although visitors arriving in Daytona Beach for Bike Week are generally respectful, law-abiding people, the heavy drinking during this event can lead to behavior that might be inappropriate for children.

Placess to Avoid in Daytona Beach

According to residents of Daytona Beach, the south part of the city (i.e, South Daytona) is the least safe.

A person has a 1 in 11 chance of being a crime victim there, a statistic which suggests that tourists would be better off avoiding this particular area.

Many people like to fish at the Daytona Beach Pier, and sharks are often attracted to the bait that people use for fishing.

The notably high volume of sharks, coupled with people’s careless behavior while swimming, has resulted in dozens of shark attacks.

With 39 listed shark attacks, Daytona Beach has seen more attacks than most other beaches in the US.

But again, these attacks usually only take place at the Pier.

As long as people swim away from the Pier and practice safety measures, such as scanning the water for predators, swimming in groups, and not wearing shiny watches or jewelry, they should be able to swim with little concern for their safety.

So... How Safe Is Daytona Beach Really?

A higher-than-average crime rate has been reported in certain parts of the city, e.g., the south part, but tourists, for the most part, can rest assured in the fact that Daytona Beach is mostly safe for tourists and that they’ll be able to vacation there safely.

The most popular (and safest) places for tourists include the boardwalk, shopping centers (such as Volusia Mall and One Daytona Mall), and other tourist attractions.

Shark attacks do occur, but they tend to happen where fishing is common (e.g., at the Pier).

As long as swimmers are careful and swim away from the Pier and closer to shore, they should be safe from shark attacks.

All in all, Daytona Beach is an incredibly fun and safe place for tourists as long as they vacation responsibly and practice safety measures.

How Does Daytona Beach Compare?