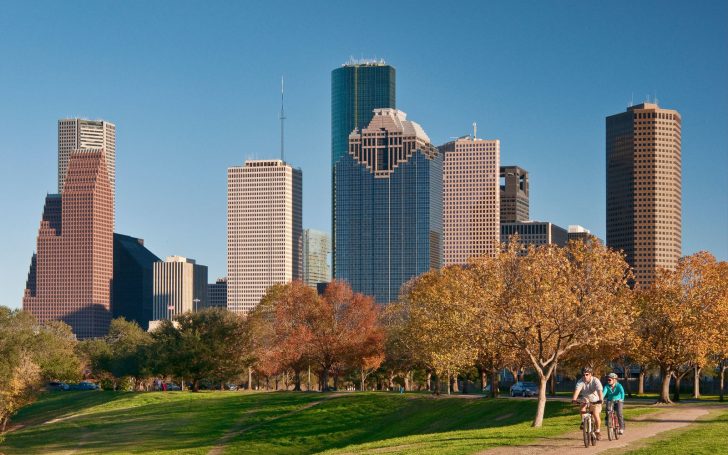 Houston, Texas, is the fourth-largest city in the United States, with a population of 2.3 million.

While some cities are much smaller, with the metro area making up for the larger population, that’s not the case in Houston.

The city also sits on Galveston Bay, with the Gulf of Mexico just on the other side of Galveston.

This means you can have a day at the beach and enjoy the nightlife in a major city without a long drive.

This proximity to the gulf also puts it at great risk of hurricanes from June through November.

This is also one of the most well-known locations for NASA, with Johnson Space Center leading the way for manned flight and working on a program to take astronauts back to the moon.

While NASA’s locations here, including the popular tourist spot Space Center Houston, are technically in Clear Lake City, it is well known that they are referred to as Houston locations.

Houston is such a large city that you can quickly end up in a bad neighborhood, so we’re going to talk through the safe districts and the places to avoid.

There's a medium overall risk with a high crime rate that just keeps growing. In fact, 2022 was the first year for a murder victim memorial where city leaders didn't read all the names of the victims because it would have taken hours.

Metro is the public transportation system in Houston, offering bus routes and rail lines. There are more than 2,200 taxis and just as many, if not more, rideshares available. Finding a rental car is easy too. Due to various risks with any option, treat this as overall medium risk.

More than 500 pickpockets and purse snatching happened in 2021, but that's a far cry from the 56,000 thefts that happened. You should always be on your guard because robbery rates are exceptionally high here, so if someone wants your stuff, they'll use any method necessary to get it. Cut the medium risk by keeping your belongings out of plain sight.

Houston faces a medium risk throughout the year, with flash flooding being one of the biggest challenges the city faces. Hurricane season can be devastating for this region, as we saw in August of 2017 with Hurricane Harvey. Severe thunderstorms and tornadoes are also possible.

The robbery rate here is more than four times the national average. Never fight back against a robber. This is a city where even getting upset by another driver can lead to a shooting, much less fighting back against an armed robber.

With the NASA presence, military locations, and massive population, there's a medium risk here. That risk comes with abundant security from local, state, and federal offices.

The city website has a list of common scams here, and while there aren't any scams where tourists are specifically targeted, you should know what potential exists. This is a city where you simply can't trust anyone posing as a person in need or pushing you to make a purchase of any kind.

Women face the same medium risk as men do. There might be parts of the city or times you're on the METRO system that might feel unsafe even if there isn't a present danger. The best way to avoid this is to travel in groups.

There are six water systems that serve the Houston area. In the 2021 Water Quality Report, all requirements were met or exceeded. You should have heightened awareness of water quality if there is flooding happening just before or during your visit. The city will send out notices should a water quality issue happen.

Safest Places to Visit in Houston

VisitHoustonTexas.com is the official tourism website for the city.

The Heights is a historic district in Houston with a funky and eclectic vibe.

This is the perfect place for some for a unique dining experience or to browse through cool boutiques.

The Art Car Museum, otherwise known as the Garage Mahal, is also located here, with ordinary vehicles turned into stunning works of art.

Downtown Houston is the central business district but also has a lot of dining and shopping options.

You might choose to say at or near Avenida Houston, which is a massive convention facility with mixed-use restaurants, shopping, and entertainment.

The aquarium takes you through a swamp, a shipwreck, a rainforest, and a sunken temple with several hands-on exhibits to spur the imagination.

The Galleria/Uptown part of the city is the premier shopping district and is home to the finest in food and shopping you’ll find in the city.

There’s an indoor mega mall and an outdoor district of shops to choose from while enjoying the beautiful park-like atmosphere along the way.

The Museum District lives up to its name with various museums.

Several of the attractions are free, helping you see more places without breaking your travel budget.

The Houston Zoo is in this district with 55 acres holding more than 6,000 animals.

Of course, Space Center Houston is one of the top tourist attractions, and it’s just down the road from Johnson Space Center.

Here you can explore the history and future of manned flights, from the moon all the way to Mars and beyond.

Rockets and astronaut suits are on display, along with a tram ride to see part of Johnson Space Center.

You can purchase VIP experiences to meet a real astronaut or get a behind-the-scenes look at astronaut training.

Houston is such a big city, it’s hard to get all the cool things to do into one article, even when just listing the safest things.

You’ll get discounts on tickets to certain areas, like a Museum Experience or a Space Explorer Pass.

There are food and drink experiences as well.

Places to Avoid in Houston

If you are traveling outside of the museums and tourist attractions, you should assume a neighborhood here is NOT safe unless proven otherwise.

Again, a city this large has so many micro-neighborhoods that it could be safe on one street and unsafe two blocks over.

In general, the east side and south side are filled with highly dangerous neighborhoods.

The Third Ward is a historic district celebrated for its civil rights fights of the past and holds a lot of diverse cultural landmarks.

At the same time, in 2022, this district is facing an increase in crime, and neighborhood residents are demanding the city take action.

It would be best to avoid the bars on Riverside Drive.

In February 2022, there was a shooting outside of one of those bars, and it was the tipping point for neighbors to demand action.

There are a lot of tourist sites that list Battleship Texas as a tourist attraction, but it’s no longer open.

It needed extensive repairs since it was the only ship of its kind from World War I and World War II.

Once it’s repaired, it will move to another city for tourists.

Safety Tips for Traveling to Houston

So... How Safe Is Houston Really?

“Houston, we have a problem.”

It’s important to remember this is a city of 2.3 million, which means the raw data is going to be higher than other cities we’ve talked about.

That said, Houston still has a bad crime problem, and it’s only getting worse.

The only real sigh of relief for a tourist is that the majority of violent crimes are domestic in nature, but it’s another breath-taking moment to find out the number of people who were innocent bystanders – especially the number of children – when those violent crimes took place.

65% of thefts are related to car break-ins, so you had better lock your car and roll the windows up each time you park.

Don’t leave anything personal inside, and take your rental car paperwork into the hotel with you.

Is it too dangerous to visit?

Most of the big attractions are in places where violent crime isn’t as high.

You should stay on the main roadways and don’t go driving around without a clear path to get to your destination.

In any big city, you should be prepared for petty crimes and thefts.

Always have situational awareness and bring only the bare minimum with you as you visit all the great places in Houston, Texas.

How Does Houston Compare?