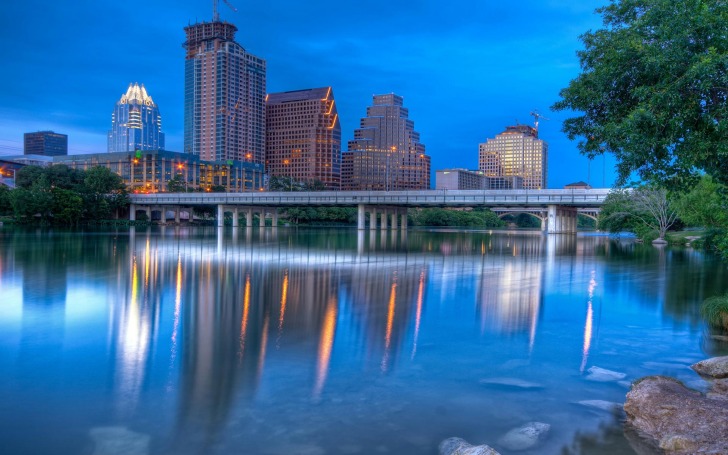 The latter of those three comes from U.S News & World Report, which ranked it as the Lucky #13 Best Place to Live.

Known for two decades by the slogan Keep Austin Weird, the phrase was displayed on t-shirts, hats, and bumper stickers across the globe.

This isn’t your typical stuffy and politically reserved capital city.

If there was a place in America for the “Cool Kids,” Austin would be a top contender.

The mix of college life, nightlife, entrepreneurial lifestyles, and good old Texas charm make it a great place to visit.

I’ve been to Austin twice in my life, and I never thought I’d spend hours just to see bats fly from under a bridge, but it’s one of the top calling cards here.

The other is the live music that streams from South Congress Avenue and beckons you for a closer listen.

The phrase The Live Music Capital of the World is even trademarked when referencing Austin.

This is also home to the uber-popular South by Southwest (SWSX), a film and media festival, which is more commonly called South By.

Outdoor enthusiasts will enjoy exploring the Texas Hill Country and Lake Travis, taking a break from the city scene in exchange for some fishing, boating, or hiking.

If you ask the Lieutenant Governor of Texas, he says the city is a "disaster" and "one of the most dangerous in America." There is very little to back up his statement. It's one of those cities teetering between low and medium risk, mostly because of crime rates that are *this close to being average but still tipping in the wrong direction. However, due to the influx of crime in the past two years, we're going with medium risk.

CapMetro is the bus system and rail line service in Austin. Uber, Lyft, and a variety of cab companies are available, and plenty of rental cars are available at the airport. There's a low risk. Be warned - whether you blame it on the drivers or the traffic or both, Austin's traffic is congested and aggressive. It could have something to do with the city growing by 20% in the past decade and not having enough infrastructure to keep up.

There were nearly 350 pickpockets and purse snatchings reported in 2020. Just seven of those were actual purse snatching, so pickpockets are pretty slick around here. This is a city with around a million people, so by comparison, the numbers aren't that bad. You do have to use standard safety practices to avoid being a petty theft victim. Don't let down your guard even if you're drinking and dancing the night away.

Don't laugh when I say there could be a hurricane impact in Austin. While the coast takes the direct brunt, the tropical system moves inland and dumps tons of rain, and can spawn tornadoes. Severe thunderstorms and tornadoes are possible throughout the year, as is flooding. Winter storms are rare, but there was one in 2021 that dumped half a foot of snow in Austin. There's a medium risk because of all the possibilities.

25% of the robberies in 2020 happened in public places, and the robbery rate is 40% higher than the national average. There's a low risk, but a possibility, it might happen to a tourist. While Austin is a nightlife town, use extra caution when you're visiting South Congress Avenue. There is a lot going on, and people lose their inhibitions in this fun town. Stay in groups and don't cut through alleys or dimly lit neighborhoods.

Being the state capital of such a large state as Texas, there's an elevated potential risk. Overall, there are larger Texas targets for a terror group to seek out.

Throughout the year, the typical utility and police scams happen. The biggest threat is when big events like South By are happening. In 2021, there was a trend of fake QR Codes being placed around town. People scanned the code to buy tickets, not knowing they were going through a fraudulent vendor who took their money.

Sexual assault rates are 20% higher here than the national average, and it's a town of young people looking to have fun. That can lead to danger. There's a medium risk because of all the possibilities a woman faces, from drunk people hitting on her to the dangers of walking around at night. I can honestly say I've walked around South Congress alone, as a younger woman, after having a few drinks, and I didn't feel like I was in danger - but it wasn't comfortable for me at all. There is a bit of sensory distortion with so much going on, and you'll see some shady, erratic, and drunk people. Only taking drinks from bartenders and keeping your glass covered when you're not taking a drink.

The 2021 Water Quality Report shows no violation and full compliance with state and federal standards. During the late winter storm, water pressure dropped, so the city issued a boil water order. This was out of an abundance of caution, and no violations happened during that time.

Safest Places to Visit in Austin

The Colorado River and Lake Austin are within the city limits.

There are plenty of boat rentals, and you can choose from a traditional boat for relaxing or a party boat to amp up the energy.

There’s a riverboat for rent and kayaks available to enjoy a day on the water.

Austin’s Duck Adventures takes people on a bus that transition to a boat, so it’s a great way to see a lot of the city in just 75 minutes.

Bars and nightclubs range from tropical-themed to Latino music pumping to laid back to elegant.

The Neon Grotto has amazing rooftop views of the city.

For county guys and gals, get your line dancing boots ready for the Broken Spoke.

It’s a Texas dance hall so authentic, you’ll be expecting Bud and Sissy from Urban Cowboy to walk through the door.

Live music can be found in any neighborhood, and there are nearly 200 options, so you should review AustinTexas.org to find the one that suits you best.

I can’t even begin to tackle all the options here!

The website also goes through all the distinct entertainment districts in town.

The Texas Capital is truly a tour-worthy place, starting with its stunning exterior that is sort of a salmon and pink color.

Be sure to enter from Congress Avenue to take “The Great Walk” and see some of the statues and memorials on the way inside.

Now we’re at the point where I tell you to reserve a seat to see bats fly.

The Congress Avenue Bridge has the largest urban bat colony you can find in America.

From spring through fall, people reserve a seat on the bridge, grass, or water hours in advance to see 1.5 million bats take off into the sky.

Grab a copy of the Austin Film Tourism Guide, and you can do a self-guided tour of movie locations throughout the Austin area.

You’ll be surprised how many moviemakers live here and keep creating films with the city as a backdrop.

Austin is one of many cities in Hill Country, so get outta town and do some exploring of the other unique towns here.

(Trust me, after a few nights of the Austin bar scene, you’ll want a break.)

Take note, if you’re trying to put Green, Texas in your GPS but can’t find it – the city is spelled Gruene.

Places to Avoid in Austin

It’s a good idea to stay east of I-35 to avoid the more dangerous parts of the city.

The Rundberg area is so risky that the city has an initiative called Restore Rundberg to help support and revitalize the neighborhood.

One of the best parts and biggest challenges of Austin can be the eclectic mix of people.

There are a lot of homeless people either passed out or being pushy about you giving them money.

As I walked back to my hotel, a man kept pace with me, demanding that I set the aliens free (????).

So yeah, electric and a bit odd, but so much fun mixed in with the concerning moments.

You might inadvertently avoid places you didn’t want to in Austin as it’s a city brimming with speakeasies.

For example, there isn’t a floppy disk repair shop.

It’s really a bar with a secret code that even the prettiest smile or biggest muscles won’t get you into.

You have to ask around to find out the unique ways to get access to speakeasies.

I’m not telling you the secrets I know.

Safety Tips for Traveling to Austin

So... How Safe Is Austin Really?

2021 was the city’s most deadly year on the street, with a record number of homicides.

One of the homicides started as a robbery but ended with the victim being shot.

Another robbery victim was attacked while pumping gas at a well-lit gas station.

In a 2022 attack, a man was found dead at Auditorium Shores at Town Lake Park after being pummelled with large rocks.

A jogger found the body.

You just can’t fight back against the violent criminal in Austin, I don’t care where you are from, and it’s not worth risking your life.

73% of the violent crimes that happened in 2020 were against strangers.

That’s an unusually high number and more of a reason to use a lot of caution while enjoying Austin.

48% of thefts were related to car break-ins, so don’t leave a car unlocked or with the windows rolled down.

Not even a crack in the window is safe because thieves can easily push it down.

Don’t leave anything in plain sight, and never leave a vehicle running while you are away from it.

Even just a few seconds is enough time to be one of the 4,000 people who were motor vehicle theft victims in 2020.

The police chief admits the homicide rate will likely increase.

What we try to do is look for the trends and patterns — if we’re seeing gang activity or more that are happening that are family violence related.

We have not seen those patterns strongly emerging to where we’d be sounding the alarm on it.”

While Austin is far from the most dangerous city in America, it’s still a city of around a million people, not just some fun college town.

You have to keep situational awareness at all times and do every smart safety step to enjoy your time here.

How Does Austin Compare?