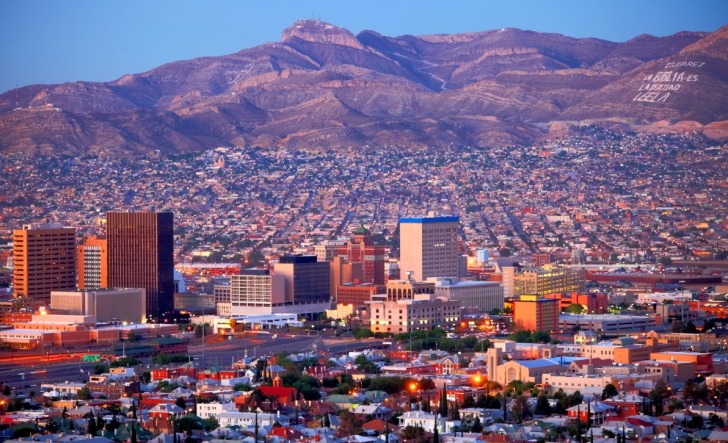 El Paso, Texas, has the culture of two counties in one location as it sits right on the Mexican border in the far southwest corner of Texas.

More than 80% of the population is Latino/Hispanic, according to the most recent census.

The city also shares a boundary with New Mexico, leaving metro El Paso and expansive desert wilderness all at a traveler’s doorstep.

There’s a strong military presence in El Paso, with an Army medical center, airfield, and the massive Fort Bliss.

This is on top of Homeland Security, Border Patrol, and the White Sands Missile Range to the north in New Mexico.

Aside from the best tacos you can taste in America (arguably), you can also explore the different neighborhoods for unique museums, crafts, and nightlife.

Outdoor lovers have trails to explore and mountains to climb in a climate that provides good weather, even in the winter.

You cap off any activity with dozens of street food vendors with unique treats you won’t find in mainstream America.

Pride Square welcomes LGBTQ+ visitors and locals, and there’s a strong live music scene to enjoy in a city where the weather is clear almost 300 days of the year.

There's low overall risk on the American side of the border and a high risk across the border - so let's call it a medium risk so we can talk through all the concerns and benefits. El Paso itself actually ranks as one of the safest cities in America but is also fighting increasing violent crime rates in 2022.

You can take the public bus system, called Sun Metro. There's a trolley that caters more to tourists that runs five miles around uptown and downtown. Rideshares and taxis are available, plus there are plenty of rental cars. There's low risk with any option, but the trolley will be a safer way to get around compared to the bus system. Some tourist attractions on the outskirts of town and in New Mexico also have shuttles.

There's a much higher risk of being pickpocketed than having a purse snatched, according to 2019 and 2020 data. The overall risk is low, as less than 100 pickpockets were reported in the 8,500+ thefts. Car thefts and break-ins are a MUCH higher risk, and that risk is growing in 2022. The challenge with car thefts in a place this close to the border is that once a car is stolen, it will likely cross the border and be gutted for parts.

There's a medium risk because of the potential threats in El Paso. These include floods, drought, earthquakes, flooding, wildfires, tornadoes, and severe thunderstorms. Elpasoready.org has a list of the risks and safety guidance.

Robberies are down 60% since 2016, and those numbers have remained steady since 2020 and into 2022. There's low risk on this side of the border but a high risk if you cross over into Juarez.

There's high potential here but a medium risk. Let me explain - the border being so close by, with growing illegal guns and drug trade, means there's more risk of danger entering the country right into El Paso. The large military presence and the nearby missile range are considered hard potential targets. There are rich targets here, but there's also a huge amount of security in this region.

The most commonly reported scam involves people impersonating police officers and demanding money or asking for donations. You should be wary of anyone offering a deal too good to be true. While the main targets of scams are locals, tourists should always be on guard.

Women shouldn't feel an increased risk in El Paso. Crime data shows men are more likely to be victims of violent crimes. The majority of violent crime happen in homes. Since there's good nightlife here, you should use all the precautions necessary and don't walk alone at night.

El Paso Water had two violations in 2021, but fully disclosed the issue in the 2021 Water Quality Report. The violations were related to reporting data, not any kind of water danger. The utility just didn't list all the required data on two contaminants. While the water quality is safe, that can change with floods or storms, so always keep an eye on local social media updates during storms.

Visitelpaso.com is the official tourism website for the city.

There is also an app you can download with all the same information in the palm of your hand.

If you have the app, you can download the audio for a self-guided walking tour of downtown El Paso.

El Paso is in the middle of a desert and far from any oceans or lakes, but this city loves water.

There are four water parks to choose from, each with a different theme.

There’s even a surfing simulator, so you can Hang Ten in the desert.

The Magoffin Home State Historic Site is the only museum in a historical home, and it’s a big one with 19 rooms to explore.

The house was built in 1875 and still has its original furnishings and trinkets.

The Old County Jail is a popular place to visit because of a legendary story where Billy the Kidd broke into the jail to break out his prisoner buddies.

You can make stops along the El Paso Mission Trail to see houses of worship along the trail where Spanish explorers first set foot.

This is one of those topics it’s hard for me to elaborate on without telling the stories you’ll learn on the tour.

The churches and chapel are adobe style, and you don’t have to be Catholic to enter.

Outdoor lovers can start at the Chihuahuan Desert Gardens, with more than 600 species of plants celebrating horticulture from both sides of the border.

If you specifically like roses, you shouldn’t miss the El Paso Municipal Rose Garden with more than 300 varieties of the beautiful flower.

The Franklin Mountains are within the El Paso city limits and provide great views of the city or the peaks and valleys of the desert.

Try to see at least one sunrise or sunset from this vantage point.

The museum is free, and it’s right next door to the El Paso Museum of Archeology.

Speaking of borders, one of the most popular places to visit in the center of El Paso is Chamizal.

This is another great story you might already know, but if you don’t, I don’t want to ruin it – but it’s a park and memorial reflective of how two countries battled and settled a border issue through diplomacy.

Places to Avoid in El Paso

While crime rates are lower than in many cities, there are neighborhoods in El Paso you’ll want to avoid.

The biggest threat historically has been in a neighborhood called Angel’s Triangle, but it earned the nickname Devil’s Triangle.

This neighborhood isn’t as dangerous as it was about 20 years ago, but it’s still not a place for a tourist to visit.

Some communities might be intimidating to people who aren’t used to Spanish/Latino culture, and this is a working-class city with 19% of people living in poverty.

You should stay in the areas designated for tourists unless you have family or friends locally who know the good and bad parts of town.

You’ll also want to avoid the Fiesta Drive-In or at least be prepared for what you will see.

This is an adult-only drive-in showing X-rated movies.

The giant screen faces the highway, so there’s no risk of kids seeing an adult film playing.

In August of 2022, the U.S. State Department updated a list of travel advisories for Mexico.

There are several categories of advisories, with certain Mexican states listed as “DO NOT TRAVEL TO.”

While Ciudad Juarez isn’t in one of those states, it is listed in the “RECONSIDER TRAVEL TO” category because of enhanced risk.

The warning to Chihuahua state is as follows: “Violent crime and gang activity are common.

Most homicides are targeted assassinations against members of criminal organizations.

Battles for territory between criminal groups have resulted in violent crime in areas frequented by U.S. citizens and U.S. government employees, including restaurants and malls, during daylight hours.

Bystanders have been injured or killed in shooting incidents.

U.S. citizens and LPRs have been victims of kidnapping.”

Specifically for Juarez, this is the guidance the government gives to its own employees, which is good advice for a tourist to follow if they decide to cross the border:

“U.S. government employees may travel to the area of Ciudad Juarez bounded to the east by Bulevar Independencia; to the south by De los Montes Urales/Avenida Manuel J Clouthier/Carretera de Juarez; to the west by Via Juan Gabriel/Avenida de los Insurgentes/Calle Miguel Ahumada/Francisco Javier Mina/Melchor Ocampo; and to the north by the U.S.-Mexico border.”

There’s the side of crime you do see in El Paso, which is what gives it a lower risk and a higher safety rating, but there’s also the border criminal activity where guns and drugs make it into the U.S.

The El Paso Police Department released data for the first six months of 2022.

Here are some of the highlights:

If you are renting a car here, these are the top three most commonly stolen vehicles:

If you are renting a vehicle, ask the vendor what is done to protect the catalytic converter.

There are ways to lock it in place, tag it so it won’t have resale value, or engrave the VIN number on it.

There is nothing unique to the crime problems El Paso faces, but the city is avoiding the dramatic increases happening elsewhere.

The real danger lies just on the other side of the Rio Grande into Mexico.

Even just driving through El Paso is quite an experience.

I was on a cross-country road trip, and I was amazed that on one side of I-10 was this big, tall city with dynamic buildings, yet across the river was Mexico, with small shanties lined up as far as the eye could see.

You’ll get a real taste of Hispanic and Mexican culture here and fall in love with the desert’s cool nights and stunning sunsets.

Plus, if you’re driving across Texas, this is a great place to rest because Texas is much larger than people realize.

How Does El Paso Compare?