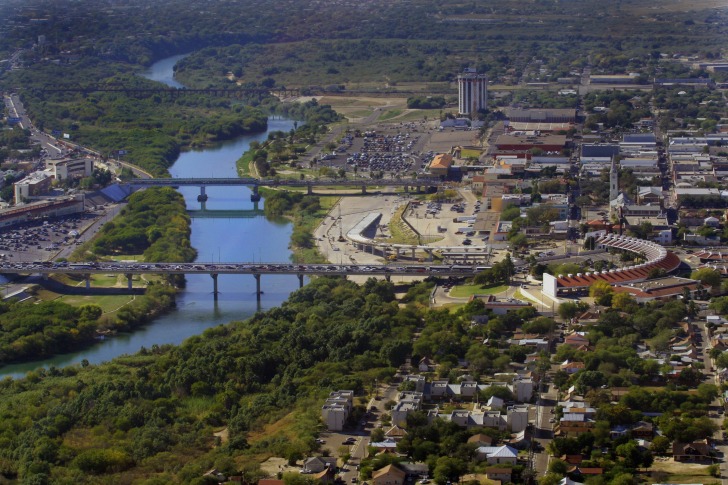 “As I walked out in the streets of Laredo..”

That song is playing on repeat in my mind as I write this safety article about Laredo, Texas, deep in the south end of the state, right along the Mexico border.

The Rio Grande River separates the two counties, and it’s really a tale of two cities, with one being among the safest in its country and the other being too dangerous for visitors – at least according to the U.S. State Department.

Lucky for you, Laredo is on the safer side.

This city of 255,000 people is more than 95% Latino/Hispanic, so English and Spanish speakers won’t have any trouble communicating.

Laredo is the busiest port between Mexico and the United States, with nearly $250 billion in trade value coming through each year.

Unfortunately, illegal drugs and weapons also make it through, which is part of a focused crackdown by Drug Enforcement, the Border Patrol, and the FBI.

In early September 2022, the largest bust in decades happened when dogs suspiciously sniffed a massive order of baby wipes.

Turns out, those wipes were actually filled with nearly $12 in cocaine.

The city has a tourism app, Visit Laredo, that includes everything a tourist would need to know either as a first-time visitor or as frequent fliers looking for something new.

There's a low overall risk here, with Laredo being named the #13 Safest City in America by Smart Asset. Violent and property crime rates are mostly lower than national averages, even with a cartel war going on across the border in Nuevo Laredo.

El Metro is the public transportation system in Laredo. Rideshares and taxis are available, as are rental cars. There's a low risk as long as you stay on this side of the border.

15 pickpockets and purse snatchings were reported in 2020, which is a low number compared to the population. There's still a slight risk, so be sure to keep your belongings secured and leave valuables safely stored in the hotel room.

There's a risk of thunderstorms, an occasional tornado, flash flooding, and extreme heat here. Remnants of tropical storms can also impact this region. This is one corner of Texas that is generally safe from the brunt of the severe weather, so the risk is low.

The risk is mostly low, as most violent crimes happen in private homes. In March of 2022, a serial robber accused of holding up six people at gunpoint in public was arrested. You need to have a lot of situational awareness here, as the violent criminals here don't care if an innocent bystander falls victim. However, for the most part, if you aren't out looking for trouble, you won't find it.

The border is always going to come with a medium risk, but it's more because of what terrorists or terror tools could get into the country, not because Laredo itself is a target. Homeland Security and Border Patrol have a strong presence here and are quick to shut down the road between the two countries should there be an outbreak of violence in Nueva Laredo.

There's a medium risk because of the severity of consequences your actions could have. While the basic resident scams - like IRS and utility fraudsters - happen, there's also a risk someone will ask you to carry a bag or drive them to a friend's house because they ran out of gas. This could be a drug smuggler or a criminal on the run. Don't offer any help that requires you to transport bags or people, even if there's a strong financial incentive.

The main warning for any woman visiting here, especially if they are alone, is don't trust anyone you meet who wants to cross the border. Don't drink a beverage unless you take it directly from a bartender. Overall, men are 8% more likely to be a victim of a violent crime. You should also know if you are confronted by a criminal, you won't get any special treatment because you're a woman.

You should definitely check the city's website before you consume or use any water in Laredo. In February of 2022, a water line break led to much of the city being without water. The water that was available was unfit for consumption. The Water Quality Report from 2021 shows one violation where there was a water quality issue, and neither the city nor residents were told about it. For the most part, the water is safe to drink, but be sure to check the latest information before you take a gulp or shower.

Safest Places to Visit in Laredo

Laredo has several historic districts where you will “walk down the streets of Laredo.”

You can learn about the unique historical assets of this community by visiting the Border Heritage Museum and the Republic of the Rio Grande Museum.

The Outlet Shops at Laredo bring the American shopping experience to the Mexican border.

You can find deep discounts on some of the most popular brands.

For a more authentic experience, visit one of the many Mexican import shops.

There’s a full list at Visitlaredo.com, so you can be sure you’re visiting safe stores.

San Bernardo is 40 blocks filled with these vendors.

Be sure to keep your purse and wallet well hidden while visiting this popular place.

There are many restaurants here, but don’t miss the food truck scene and the Mexican Street Food, known as antojitos.

If you want a good breakfast taco, ask for a mariachi (yes, like the music).

One of the most popular restaurants in Texas – yes, it’s a chain – is Rudy’s barbecue.

I first had Rudy’s in San Antonio, and at first, you wonder, “Why are we going to dinner at a gas station?”

The brisket is about as close to food heaven as I’ve ever been.

Instead of trying to swim in the Rio Grande, head to Lake Casa Blanca International State Park.

Hiking, fishing, boating, and camping are all available here.

Fishing gear is even available for loan!

Bass and catfish are two of the most popular fish here.

Places to Avoid in Laredo

West of I-35, which cuts the city down the middle, has the higher crime rates.

This is a city where you should stay on main roads and near crowded public spaces or historic districts.

24% of the city lives in poverty, so even driving around to just look at houses isn’t going to be very interesting.

The water quality isn’t all that great, even with improved wastewater treatment on the other side.

People also die trying to swim across the river, either for fun or trying to cross the border illegally.

You also don’t want to be mistaken for a border jumper, and the country border goes right down the center of the Rio Grande.

While nobody is going to force you to stay in America, the U.S. State Department has the state of Tamaulipas, where Nuevo Laredo is located, on a “DO NOT VISIT” list, accompanied by this warning, “Heavily armed members of criminal groups often patrol areas of the state and operate with impunity particularly along the border region from Reynosa to Nuevo Laredo.

In these areas, local law enforcement has limited capacity to respond to incidents of crime.”

In March of 2022, the U.S. Consulate in Nuevo Laredo came under attack after the U.S. busted a major player in a Mexican cartel.

When this happens, cartel members simply want to punish any and all Americans they can.

This has happened many times in history.

Don’t risk crossing the border thinking, “every city has crime!”

You literally have nobody to protect you on the other side.

Safety Tips for Traveling to Laredo

So... How Safe Is Laredo Really?

One of the most surprising parts of my research is how dangerous the Mexico side of the border is, but just a few feet into America, it’s so much safer.

Not all border cities have this level of safety.

From 2020 to 2021, the overall crime rate in Laredo was down 8%, according to the police department’s annual report, and robberies were down 40%.

The biggest challenges facing law enforcement might be some things you’ll never see as a tourist.

It’s the illegal drugs laced with Fentanyl, the humans being trafficked, and the immigrants crossing the bordering hordes to escape violence in Mexico and South America.

You might not notice the stash or trap house nestled into a lower-class community of hard-working people.

That said, there is still a healthy dose of crime here – it’s just generally among people who know each other or domestic issues.

Just 11% were against strangers.

One of the oddest crimes I’ve read about in a long time involved two women who lured a man into backseat sex, and when the man tried to escape, the women reportedly pulled weapons on him and said they were going to kidnap him.

He did manage to get away.

You can safely visit Laredo and enjoy the amazing history, culture, and weather of this region.

It also helps if you know some conversational Spanish here.

How Does Laredo Compare?