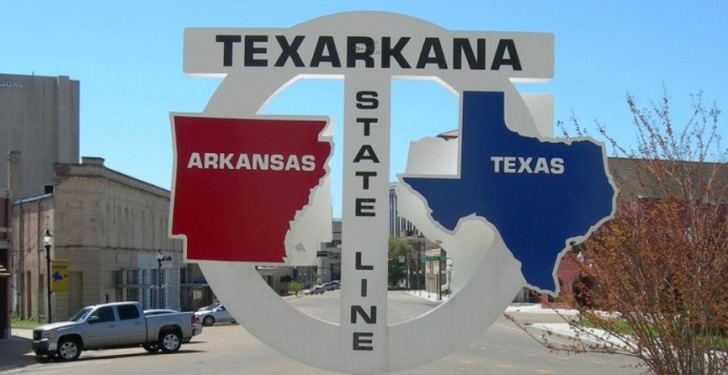 Texarkana, Arkansas sits right on the Texas border, with the town literally split in half.

We’re going to cover both sides of the state line in this article because it’s hard to talk about one without mentioning its twin city.

The region is known by locals as Texarkana, USA.

At some intersections, it’s not even clear when you’re crossing a state line.

Even the Post Office refused to play favorites and it’s split down the state line, with half in Arkansas and half in Texas.

Texarkana, Arkansas was here first and once bordered by Mexico before Texas was a state.

It was a transportation hub and a booming manufacturing area for logging and cotton.

This entire region is also known as the Four States Area since Oklahoma and Louisiana are close by too.

(Not to be confused with the Four Corners area where New Mexico, Arizona, Utah, and Colorado meet.)

Now, the entire metro area is home to 65,580 people, with the Texas side having a higher population.

The name stems from the bordering states, mixing Texas, Arkansas, and Louisiana to create Texarkana.

To drive across the entire Texarkana metro area east to west is a 20-minute drive and north to south will take about 15 minutes.

This is really the melting of two small towns into one bigger area.

The cities have different police departments and city organizations but share some facilities like the jail and utilities.

There's a medium risk on both sides of the state line with the Arkansas side having higher crime rates, but overall both cities are above their respective state averages. There's also not a whole lot to do on either side of the state line once you've hit the handful of attractions.

T-Line Transit service is based on the Texas side but serves both states. There are taxis and rideshares available. There's a low risk during the ride, but watch your surroundings when waiting to be picked up.

On the Texas side, you have a higher risk. There were 14 pickpockets and purse snatching in 2020, although the thieves didn't get away with more than $21 per event. The Arkansas side had no pickpockets reported. There's a low risk by the numbers, but the violent crime numbers are enough to bump this up to medium risk.

There is a medium risk here as this is the heart of tornado alley. Tornadoes are common in the spring and stretch into summer. Early winter brings another season of severe weather. Winter storms can bring icy conditions to the roads, halting all traffic.

The robbery risk on both sides of the state line is nearly double the national average. More highway robberies were done on the Arkansas side. There's a medium risk as this is a violent city, and sometimes what starts as a robbery can be counted as an aggravated assault if someone fights back against a criminal.

There's a medium risk because of the Red River Army Depot just on the west side of the Texas city. This depot provides repair and preparation of military equipment. Terrorists are always going to attempt to target key military locations if they can get by Homeland Security.

There are a lot of scams reported in the Texarkana's, but none that directly impact tourists. There's a low risk right now, but check the Better Business Bureau and the local police departments' websites to see if new scams pop up before your visit.

There's a medium risk for women here. The sexual assault rate is twice the national average for the metro area, and the higher percentage is on the Texas side. With so much violent crime in this entire area, women should just really be on notice to protect themselves, and carry mace or use keys to defend themselves if necessary. I've driven through Texarkana as a single woman, and I never felt unsafe, but it also just has the appearance of a more run-down area and it wasn't a place I did any more than fill up my gas tank in.

The utility company covers both states and had one violation in 2019 that wasn't health-based. The water has a low risk, but check with the Texarkana Water Utilities website when you arrive to see if there are any quality issues.

Safest Places to Visit in Texarkana

Start downtown at the Federal Courthouse and you’ll see the post office with the state line sign in front.

This is one of the most photographed federal buildings in the country and rivals the Supreme Court for photo ops.

1894 City Market is a place artists will love.

There is local art on display daily and during some parts of the year, you might even see an artist at work outside.

One of the most popular restaurants in the region is here too.

Hopkins Icehouse is built on the walls of an old icehouse and serves up modern food with a casual style.

When you’re in Texas, stop by Whataburger for a fast food delight.

There is almost a cult following of people who love Whataburger burgers, so if you choose fast food, give it a try.

The Discovery Place Interactive Museum is on the Texas side.

There are attractions to test and tempt all of your senses and one of the most popular displays is the million-volt musical Tesla coils.

One cool attraction here is the 1885 historical home designed like the Ace of Clubs playing card.

Inside, you’ll see historical architecture and a shoe collection that would make Carrie Bradshaw envious with more than 500 pairs of collectible shoe items.

The Holiday Springs Water Park is open during the warmer months with giant water slides and pools to cool off in the Ark-La-Tex humidity.

There’s a collection of cars dating back a century and some hot rods you can only envy.

Admission to this museum is free.

Take a 20 minute trip to the town of Fouke, Arkansas, and you can learn about the legend of the Boggy Creek Monster.

The “monster” is said to be similar to Bigfoot and roams the woods of this small town.

This legendary tale was also turned into what is now a cult classic movie in 1972.

Places to Avoid in Texarkana

Looking at the crime maps across both states, the south side of town has higher crime rates in general.

On the Arkansas side, crime rates are highest south of Highway 67 where it meets Highway 82 near downtown.

On the Texas side, the New Boston neighborhood and south of there have the highest crime rates.

In all fairness, there isn’t a section of the city that has extremely low crime rates until you get to the far outer reaches of the metro area.

It’s just good to always be on guard here.

Drive with the doors locked, keep valuables at home or in the hotel, and always leave your car empty and locked when parking.

Don’t leave anything in the car that lures a thief.

One comment on Sperling’s Best Places from 2016 said, “While Texarkana, Texas can look relatively neat in places, the “Arkansas side” is another story.

The majority of this community is infested with crime, homelessness, and unbelievable poverty.

Many of the buildings on the main drag (9th St) are either shuttered or rotting on their foundations.

Hardly any big chain businesses are here except a small number off the interstate.

You have to “cross over” to get anything of value.

It’s a town where even waiting at a stoplight can be nerve-wracking.

In reality, nearly 11% of people on the Arkansas side live in poverty, while that number is nearly 15% in the larger city on the Texas side.

Also, the latest homeless person count was 86, which was down 28% from the previous year.

Safety Tips for Traveling to Texarkana

So... How Safe Is Texarkana Really?

People from a bigger city like Chicago might not think the crime here is all that bad, so a lot of how safe it is comes from your perspective.

Violent crime on the Arkansas side is higher, as is the theft rate.

Robbery is higher on the Texas side.

Texarkana, Texas, has long been considered one of the most dangerous cities in Texas when reviewing crime statistics.

The police chief says that’s true, but it’s not the full story.

“But by and large, all of our violent offenses, they’re domestic in nature, they’re relational, they’re not random acts of violence, and unless our citizens are involved in some type of illicit criminal activity or involved in some type of domestic issue in the home or with somebody that they know, our citizens are really very safe,” Police Chief Kevin Schutte told a local newspaper in 2019.

Unless you’re involved in a domestic fight or get caught in the crossfire of someone else’s, you shouldn’t be unsafe here.

The average income in both cities is in the mid-$40s, compared to Bentonville in the northwest corner of the state, where the annual income is in the mid-$80s.

Here’s how crime breaks down in Texarkana, Arkansas, per incident from 2020 data:

Here’s how crime breaks down in Texarkana, Texas, per incident from 2020 data:

It’s more dangerous than many of the other cities in the region, but it’s not an unsafe place to stay.

It’s just one that requires you to be a little more on guard.

How Does Texarkana Compare?