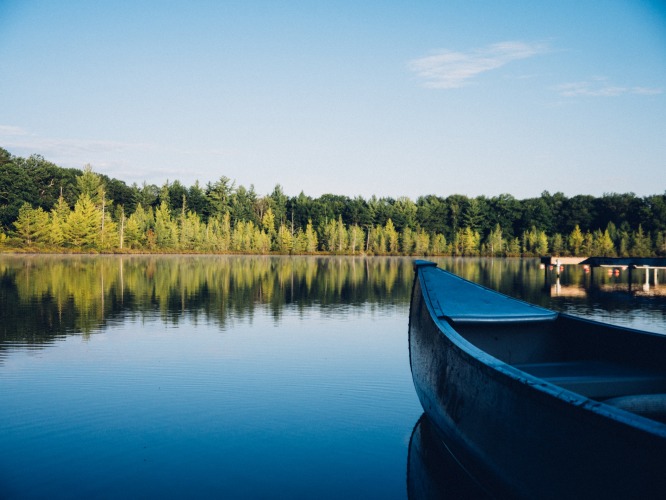 Fans of the show Ozark will recognize the area where Mountain Home, Arkansas is located as it’s in the Ozark mountain range.

Set between Norfork Lake and Bull Shoals Lake, the Natural State really shows off in this region of the state.

It was once cut off from the world because there were no roads, but the installation of two dams at those lakes helped pave the way for a growing community (and electricity!).

This is small-town Arkansas with less than 13,000 and you’ll find a large retirement population here.

There’s also a two-year college, so you’ll get some younger generations as well as middle-aged people honoring their skills.

There’s a reason Arkansas is called “The Natural State” and that’s because there’s a lot to do outside.

If you are an “indoors” person, you might not have a great time here, but please give some of my suggestions a try.

I found some really cool sightseeing opportunities nearby.

This one surprised me!

There’s an entertainment district downtown designed as the first of its kind in the state that opened in 2019.

In Arkansas, counties are either “wet” or “dry”, meaning if they allow sales of alcohol or not.

Baxter County is a “wet county” and that opened the doors for Mountain Home to enact an open container law in this entertainment district.

I’ve visited a few places in Arkansas and even in a “wet” county, they still didn’t want a big downtown party going on.

Good for you, Mountain Home!

You’re going to need a rental car or your own car in Mountain Home, as the city itself doesn’t provide a whole lot of entertainment outside of downtown.

Within 30 minutes, however, you can get to some of the best fishing in America, tour an underground labyrinth of caves, and see the only ghost town right in the middle of an actual town.

There is also a Mountain Home, Idaho, which is the dominant name that comes up in search engines.

Be sure to add “Arkansas” to your search so you are sure you are at the right place.

There is also Mountain View, Arkansas, which is about an hour south of Mountain Home.

There's a low overall risk in Mountain Home. There is a spike in theft that had me head-scratching until I dug into it a little bit more. You've got to worry about weather here, too. Outside of those two things, you're poised to have a fun and safe time in Mountain Home.

There's a transportation service called NATS that can be used, but it's mostly used by elderly people who can't drive. There are very few taxis and rideshares, so you might have to wait a while. The options are low-risk, but also really hard to come by if you're relying on that to be your method of transportation and the costs could really add up.

The theft rate is high here. Normally, I'd say that's because there's a low population and so the crime numbers can be skewed. However, any way you slice it in Mountain Home, there are a lot of thefts. 1 in 39 chance, in fact. Six of those were pickpockets. That's more pickpockets than some towns five times that size. We'll call this a medium risk, not just because of six pickpockets, but because 254 of the thefts were in a category that could involve people stealing things from your RV or campsite.

There's a medium risk here. Baxter County is prone to tornadoes and severe thunderstorms in the spring especially, but they can happen in summer and fall too. Arkansas is also on this imaginary weather line during winter where it snows to the north and rains to the south, but Arkansas can get some pretty nasty ice storms.

There have been three robberies in this town since 2010, so that's an incredibly low - and somewhat unbelievable -crime statistic. I did double-check the FBI numbers with the local police, and they confirmed it.

There's a very low risk here. Nothing around this region is a hard target. Weather is the biggest disaster possible.

There is a low risk of being scammed, but keep an eye on the police department's website. They have a whole section on common scams with some videos. Right now, the biggest scams target locals, not visitors.

There were 13 rapes in this small town in 2020, and that's about a yearly average for the past decade. That's nearly three times the national average. Putting that concern aside, but knowing you should be aware of it, it's a low risk. This is a community of tough-skinned people and it is a poor town where 12% of people live in poverty. That doesn't make them bad people, it just means to watch your back and be careful during any interaction that involves alcohol, especially if you stand out as not being from around there.

There's a low risk in the tap water and it meets or exceeds all required standards at the state and federal levels.

Start in the downtown entertainment district to get a lay of the land.

The shops and restaurants are open during regular business hours throughout the daytime, but after 4:30 pm the open container law goes into effect until midnight.

You can walk from bar to bar, similar to New Orleans and the famous Bourbon Street (on a much smaller scale), and enjoy an alcoholic beverage as long as it’s in a plastic cup.

Golfers can play at Big Creek Golf Course & Country Club and there are rates for the public, which is a nice change of pace from other country clubs that limit it to members only.

Then you’ve got the choice of which lake to go see.

I grew up in Missouri and went to school in the Ozarks there, so I know a lot about this region.

Some lakes are just natural wonders in all their beauty and others that just offer a little bit more dazzle for tourists who want more options.

Norfork Lake is known for its 25 to 30-pound fish that have been caught.

There’s also plenty of room for boats, kayaking, hiking, and any other outdoor activity you’d like.

Bull Shoals Lake has all of the same water amenities, but is a little more “touristy”.

Each lake has resorts, camping, and RV parking areas.

Bull Shoals also has a cave tour you can go on.

You can even get married in Bull Shoals Caverns.

There will be bats in the cave.

Leave them alone unless you want a rabies shot on vacation.)

The great thing about the Ozark area’s lakes and rivers is there is a lot of shoreline because of the ragged edges.

That means more resorts and places to go.

For my money, I’d go 30 minutes south to Calico Rock.

This is where you can tour a ghost town right in the center of a real town.

There are 20 stops on the Ghost Town Tour.

You’ve also got the Blanchard Springs Caverns to explore there as well.

Places to Avoid in Mountain Home

Looking at the crime map with the 2020 data, the west side of town is the most dangerous.

The only hotels in the city are in the northeast section, so you won’t have to worry about staying in that part of town.

Avoid driving on the mountain roads if you get nervous on windy streets that might be narrow and have traffic flying at you.

The roads in the Ozarks bend and twist to the layout of the mountains, so even when you look at a map, a destination that is 20 minutes away as the crow flies could be an hour’s driving because of this.

The roads have little lighting at night.

I always bring up these points because my mother would never drive on those roads at night.

She always made my dad do it, or one of her daughters when we got old enough.

Avoid getting into a political fight in Arkansas.

While Mountain Home is one of the more evenly split political cities, it’s just not worth the hassle if you say the wrong thing to the wrong person.

People here are very set in their ways and your point of view won’t change them, so leave it be.

You might have a hard time understanding some people in Arkansas, as they can have thick accents.

People here will also talk slower than city slickers are used to.

So... How Safe Is Mountain Home Really?

This is one of those “good news, bad news” cities.

The good news is the violent crime rate is incredibly low.

On top of that, most violent crimes involve domestic situations.

As I’m writing this, a mother is in custody for stabbing her teenage son to death, reportedly telling people she “had to do it for righteousness.”

The bad news is the property crime rate is over the Arkansas state average and nearly double the national average.

We talked earlier about how this is a poor town, right?

There were 41 car thefts with the average value of the vehicle being $3100.

Anything of value left in plain sight could be at risk here.

Don’t even leave the lawn chairs of your RV sitting outside at night.

Here’s a look at the risk of being a violent crime victim:

Going out on the water carries its own safety risks, so take all the proper precautions.

Wear life vests, don’t swim near a boat’s propeller, and let someone know when you’re going out into the wilderness and when you’ll be back.

Always check the weather before you go for a day outdoors.

You don’t want to be stuck outside in one of Arkansas’ infamous severe storms.

How Does Mountain Home Compare?