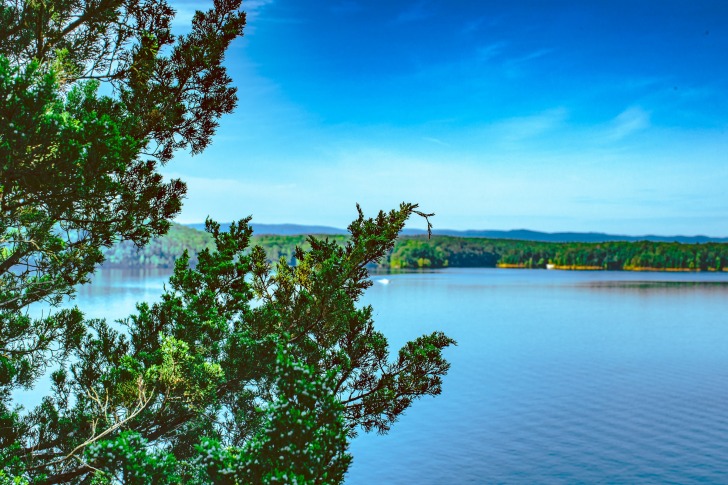 Arkadelphia, Arkansas is a “blink and you’ll miss it” kind of town, but don’t blink because we’ve found so many exciting things to do in and around this slice of small-town America.

Arkansas is called “The Natural State” and it lives up to that name in every way.

In some ways, it’s like Arkadelphia doesn’t want to be discovered.

There’s no link to the city police department and you can find little more than the Clark County Sheriff’s bio on that website.

There’s a historic downtown here with a handful of shops with locally made goods.

A water park in town provides much-needed relief from the humid summers.

As for the food scene, there are some chain restaurants in town, but I recommend eating locally in eclectic places like the Hamburger Barn.

For those who want to learn more about Arkadelphia, go to Facebook and search for the following phrases – I’ve also added their handle:

The Arkansas State Park website is a great resource too.

There's a low overall risk here. The crime rates are low and the biggest threat here will be the weather during certain times of the year. People are friendly, and the colleges give a young vibe to this small town, but there's also a good number of senior citizens living out their golden years here.

There's a SCAT bus system that goes around Clark County, where Arkadelphia is located. This is a non-profit service mainly used by seniors and there's just one bus stop in town. I wouldn't rely on taxis to get around here, as one taxi listing hasn't updated its Facebook page since 2018. With the colleges here, rideshares might be a more reliable option. It's best to have a car here. All options are low risk, but also have low chances of being the best way to get around.

I was surprised to see this small town had three pickpockets reported. Some cities three times their size don't have that many. The pickpocketers got away with less than $90. There's a low risk of this happening, but it's a good reminder that a small town doesn't always mean no risk of petty theft.

This is the one we need to talk about because there's a medium risk throughout the year and when storms are developing there's a high risk. Arkadelphia gets a little bit of the worst of everything, aside from tropical weather. Tornadoes in the spring can be deadly. The most historic storm here was in 1997 when one of the 16 tornadoes that moved across Arkansas hit Arkadelphia head-on. It was an EF-4, the second most dangerous tornado ranking possible. Sixty blocks of the city were in ruins and five people had died. You have to take severe weather seriously here. In the winter, Arkadelphia and Clark County can be crippled by ice storms. Even the most skilled driver in the biggest 4X4 truck can't drive well on ice. Always check weather conditions before coming to Arkadelphia.

There were four robberies reported in 2020, and two of them were robberies in public. This is where crime statistics can look worse than they are. I could say that half of all robberies here are against people in public places. The reality is, only two people were mugged. There's a low risk here of it happening to you, but the town isn't immune from common crimes.

There's a low terrorism risk here. There are no hard targets nearby.

The biggest scam reported was fraudulent puppy sales (to the tune of $160,000!) recently. The suspects in that have been arrested. There's a low risk of a scam happening here.

This is a safe place for women to visit, though not a whole lot for them to do. There was one sexual assault reported in 2020, but historically there are at least five reported a year dating back to 2013. Basic personal safety practices are enough to avoid problems here.

The tap water here is safe with low risk. I reviewed the 2020 annual water quality report and there were no violations found.

Safest Places to Visit in Arkadelphia

Researching this story, I think it’s fascinating how much this city has rebuilt itself since that 1997 tornado.

If you look up pictures from that day, you’ll see the devastation that’s hard to imagine.

That’s why walking through the Historic Downtown District is all the more special as it’s rebuilt today with history still represented with modern touches.

You’ll find so many locally owned and operated stores, like the Gossip Shop Salon and Boutique, The Farmhouse gift shop, and Samantha’s Bakery and Cafe.

There’s a farmer’s market two days a week as well.

The Clark County Historical Museum is in Arkadelphia’s Amtrak station.

You can see artifacts all the way to when Native Americans roamed these lands through the founding of the city and to the current day.

DeGray Lake is one of this region’s biggest natural attractions and it’s just 20 minutes from Arkadelphia.

This isn’t just a park with a rock-filled parking lot, this is like an amusement park made of natural amenities.

Look at the guided tours as there’s everything from a snake tour to a sunset cruise.

You can also road trip about 90 minutes to Lake Ouachita.

A national forest surrounds this area and it’s perfect for camping.

There’s a bathhouse too for those who don’t want to brave the elements with reliable bathing options.

The cold water springs are rumored to have healing powers.

Places to Avoid in Arkadelphia

Arkadelphia is too small of a town to have bad neighborhoods and the crime rate is so low there wouldn’t be much to show anyway.

You might get discouraged looking for Arkadelphia hotels, as there is just one in town.

However, look up the road where I-30 meets Highway 67 where there are plenty there.

They are listed as Arkadelphia hotels, but they’re about 5 miles northeast of the town.

Mobile homes can’t withstand powerful tornado forces well and are generally the first to get damaged or destroyed.

If you’re heading into the wilderness, either alone or with your family, let someone know where you are going and when you plan to be back.

There is spotty cell phone coverage in Arkansas and 5G service is quite limited off the freeways.

A hot spot might be worth the purchase to bring with you.

Safety Tips for Traveling to Arkadelphia

So... How Safe Is Arkadelphia Really?

This is a very small town that isn’t always welcoming to strangers.

They won’t be rude, they just won’t trust you at first.

Drugs are a problem across America and even in small-town Arkansas.

Nationwide, 100,000 people have died from overdoses.

The main warning is this – don’t take drugs that don’t come from a licensed pharmacy.

The drug trend now is counterfeit pills made to look like common drugs like Xanax, only they’re loaded with Fentanyl.

Only 2 milligrams of Fentanyl can kill a person.

How Does Arkadelphia Compare?