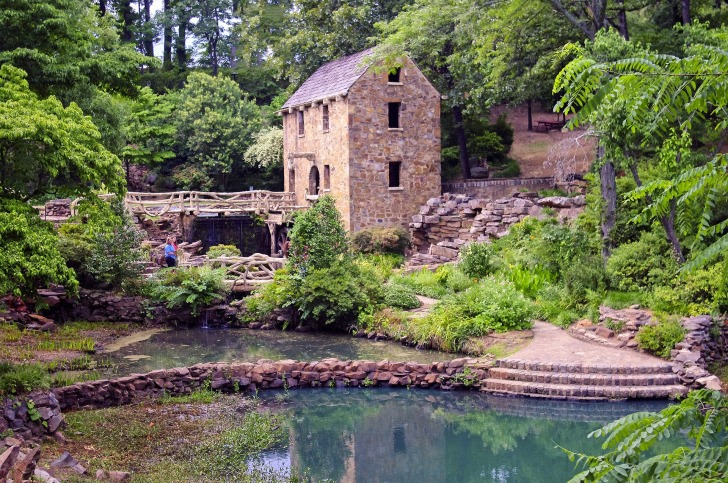 There’s one that’s bursting with entertainment, art, and modern amenities while still capturing the essence of the city’s history.

The other one is crime-ridden and dangerous.

Yet somehow these two places exist in the same space.

The city sits on the Arkansas River, with Little Rock on the other side of the Big Dam Bridge (actual name).

This is a diverse town with equal numbers of African Americans and Caucasians, with 6% Latino/Hispanic and another 5% being mixed race.

This diversity brings so much energy to the food scene in North Little Rock.

On the flip side, 22% of the people live in poverty here.

There’s history on land, underwater, and on rivers here and they’re all open for viewing.

There’s a place here where Gone with the Wind fans will recognize immediately.

There’s an actual gravestone for the nickname of the downtown area city leaders didn’t like, but is now making a resurgence.

Dogtown was literally laid to rest, and nobody can say for sure how the downtown neighborhood got that name.

However, you can now buy swag with “Dogtown Life” on it.

You can even take a picture next to a fantastic Dogtown mural.

The downtown area is now called Argenta, a word that means silver.

It got its name from the silver mines that were harvested north of the area.

It was once the name for the whole city of North Little Rock (NLR).

Through some creative legislation, North Little Rock got its name and Argenta was preserved for the downtown area.

There’s a resurgence of activity happening here, even though it has crime rates to match a much bigger city.

There's a medium overall risk here. It's a balance of there is so much to do vs. there is so much crime. Some locals say it's not that big of a deal, others will tell you about the three times their car was broken into and the one time they got mugged in broad daylight without batting an eyelash (and they still live there).

The Rock Region Metro is the public transportation for the whole area. You can download the app and learn more about the routes and prices. Taxis and rideshares are available, and they all come with low risk. Just be careful at bus stops, especially after dark.

There were nine pickpockets and purse snatchings in 2020. That's a low number, but it's still a medium risk when compared to the crime rates surrounding it. Only bring what is absolutely necessary in your purse and leave all valuables behind.

There's a medium risk of disasters all year round with a high risk in the spring during the tornado season. Little Rock is #5 on the list for the most damaging tornados and NLR is just across the river. Winter can bring snow storms mixed with ice or just ice storms. Ice storms are especially dangerous because not only is travel limited, but the weight of the ice on branches causes them to break and land on power lines, leaving people in the dark and cold.

The robbery rate is twice the national average and over the Arkansas average as well. 31 of the 110 crimes were muggings in public places. That's a medium risk and you have to watch your back in this city because it's easy to get distracted by all the fun things.

There's a low risk. It is a larger population center, but there's no real hard target here.

Nearly 300 fraud arrests were made in 2020, and the bulk of them were either under false pretenses or at the ATM. There's a medium risk and you need to protect your PIN when making purchases. Go inside a bank to withdraw cash or use the ATM.

Women should use extra caution here and there's medium risk. On the positive side, the sexual assault rate is under the national average. Be very aware of how much you've had to drink and never try to walk around after dark alone and don't walk home or back to the hotel when you've been drinking.

The water is safe to drink and there's a low risk. The water utility has no violations and meets or exceeds all standards.

There is a surprising number of unique things to do in North Little Rock.

The William J. Clinton Presidential Library and Museum is in NLR.

There are 16 museum rooms to explore from many eras of the Clinton presidency.

There is also the Presidential Limo on display.

Hanging out in Downtown Argenta gives you that standard small southern town feels with sophistication and rejuvenation.

Eat and shop your way through the streets.

Visit the North Little Rock Heritage Museum while you’re there and hear the story of Dogtown.

Speaking of the river, you shouldn’t miss the incredible Arkansas Inland Maritime Museum.

Here the USS Razorback stands in all its glory.

The Old Mill located in T.R. Pugh Memorial Park is the very same mill from the opening scene of Gone with the Wind and it’s restored to all its glory now for the perfect picturesque photo op.

If you have a large group of 10 or more, you can schedule a guided tour of the area.

The sub was put into action in 1944 and served in World War II, through the Cold War, and into Vietnam.

You can even have a submarine sleepover if you’d like.

The south side of town has the bulk of the crime and the lowest crime areas are north of I-40.

There aren’t any tourist attractions in that area anyway.

As with any downtown area, the crime there is higher than in some other parts because of the congestion of people.

While this is Arkansas, it’s still a major metropolitan area with its fair share of crime.

Avoid walking around alone at night, especially if you’ve been drinking.

I’m a big “gut instinct” person and I know not everyone has as strong of a gut instinct as I do.

Wherever your gut instinct falls on the spectrum, use it here.

I read one review of a man who felt a car at a stoplight ahead of him was a bit off.

Then a man jumped out of the car and ran toward the reviewer.

The would-be victim drove off.

Turns out the people in the other car were connected to a brutal beating earlier in the day.

Don’t go off the beaten path.

The farther north you are, the less crime you’ll see.

So... How Safe Is North Little Rock Really?

They both have a high crime rate.

Someone coming from a small town might be overwhelmed.

A lot of the danger is where you go and what you do.

If you’re in town, looking to party, maybe trying to get some weed, you will more likely run into danger.

If you are day drinking and not paying attention while going from bar to bar, you might be an easy target.

If you’re just seeing the tourist sites, staying on main roads, and being aware of your surroundings, you’ll have less of a risk.

Here’s how crime breaks down by the risk and number:

This is a city where you must lock your car and leave nothing inside.

Even a GPS holder could suggest there’s a GPS inside.

One woman on Reddit commented that her registration papers were taken from her car.

Try to park in a place where you can see a security camera.

Avoid walking around late at night.

If you are a victim of a crime, let the police know right away and be a good witness.

Try to focus on the height, weight, and distinguishing characteristics of the criminal.

If you’re looking for a safer city to visit in Arkansas, check out our Bentonville article.

How Does North Little Rock Compare?