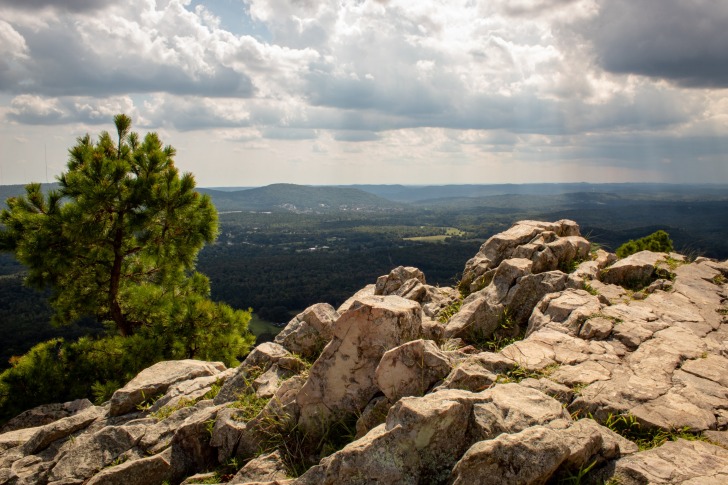 Jonesboro, Arkansas is perched atop a geological formation known as “Crowley’s Ridge.”

You’ll only notice the rolling hills of the area, but geology buffs might get a kick out of learning more about the geological history at Forrest L. Wood Crowley’s Ridge Nature Center.

This town of nearly 80,000 people is the hub for surrounding smaller cities in northwest Arkansas, the Missouri bootheel, and far eastern Tennessee.

Arkansas State University brings a youthful college vibe to this city with plenty of nightlife and campus excitement.

You might hear locals refer to this area as Region 8, which stems from a popular local television station, KAIT 8, which brands itself with that tag line.

The accessibility of Jonesboro to major cities like Memphis and Little Rock makes it a good weekend getaway.

It's intimidating and confusing to do a general search of the overall safety risk in Jonesboro. Different websites post conflicting information. Here's the reality based on FBI numbers. Jonesboro has a medium overall risk. Crimes against people and property were up more than 13% from 2019-2020. Rape numbers were down. And motor vehicle theft skyrocketed 43%.

There's a low risk of danger of getting around Jonesboro in taxis, rideshares, or public transportation. Taxis are required to be licensed by the city, rideshare services have safety requirements to pass before a driver is allowed to offer rides, and the public bus system called JETS offers rides during daytime hours every day except Sunday.

This is medium risk. Both burglaries and larcenies were down 3% between 2019 and 2020. In fact, burglary hasn't been at its current level since 2013.

There's a medium risk of natural disasters in Jonesboro. You might recall seeing the news about the EF-3 tornado that went through this town in March of 2020 hitting a local mall. Jonesboro has a history of violent storms that can whip up during severe weather seasons during the spring and fall. In the winter, a snowstorm or ice storm is possible, but not guaranteed each year. The city is very good at alerting residents and visitors if severe weather is possible or imminent.

This is medium risk. Looking again at the lower burglary and larceny numbers, it's a relief that those crimes are trending down, but aggravated assault is up 19%, so it's wise for would-be mugging victims to not fight back. A person's wallet or purse isn't worth their life.

There's a low risk for terrorism in Jonesboro with no hard targets nearby. The University of Arkansas in Fayetteville has a terrorism research center that helps the state and the nation learn about terrorism and how to prevent it. In 2009, a terrorist was shooting at the Little Rock military recruiting center where two people were killed by Abdulhakim Mujahid Muhammad. It was a tragic, but isolated, event.

The Better Business Bureau (BBB) has a list of 8 scams going through the Jonesboro community, but there's a low risk of falling for one if you are a savvy consumer. For example, one tells you not to plant mystery seeds from China. Given that the community is full of hospitality and genuinely nice people, they also look out for each other and can spot a scam a mile away.

Tap water has a medium safety risk given the 2020 report by Jonesboro City Water & Light said, in part, "Based on the various criteria of the assessment, our water sources have been determined to have a low to medium susceptibility to contamination." However, none of the testing done in the 2020 report was in violation of local, state, or federal requirements.

Safest Places to Visit in Jonesboro

The area around Arkansas State University is a safe place to visit.

Between university police patrolling and sending out crime alerts on top of the Jonesboro police force, there’s a low risk of being a victim of a crime in this area.

The downtown area has boutiques and antique shopping along with some local eateries and art displays.

The big draw to this area is Crowley’s Ridge Nature Center.

Log cabins fill this forested area with several lakes on the property.

There’s no entrance fee to the park, but renting a log cabin, a campsite, or water recreation vehicles and permits does come with a cost.

Jonesboro is also known as a “City of Churches” and there’s a place of worship for all religions.

The First Baptist Church and First Methodist Church are two stunning and safe places to visit with a history dating back to the 1910s.

There are some entertainment venues and basic activities like bowling and laser tag, but most people come to Jonesboro for either the university or to get away from all that kind of “city life” stuff.

Placess to Avoid in Jonesboro

Crime maps show the area just north and east of Jonesboro are the most dangerous.

It’s a city of families and close-knit neighborhoods, so the average tourist wouldn’t be wandering in those areas anyway unless they had kin there.

It’s best to always be vigilant and don’t let the laid-back style of the city knock down your guard.

Lock the door to your car if you drive there.

The Jonesboro Police Department employs 169 sworn officers, which makes one officer for every 437 people.

Just in case you need to call the police while you are there, store this number in your phone now—(870) 935-5657 is the non-emergency number.

Safety Tips for Traveling to Jonesboro

So... How Safe Is Jonesboro Really?

Jonesboro, Arkansas, is called everything from one of the safest cities in America to one of the most dangerous you can find.

In the past decade, the population of Jonesboro has grown nearly 20%.

With more residents, comes more crime just as a fact of nature.

The biggest increase in crime from 2019-2020 was Crimes Against Persons up 14%, a number that was driven by a 19% increase in aggravated assault.

A good chunk of the assault crimes could be related to drug activity in the city, which isn’t an attack on a tourist.

DUI’s, drug arrests, and weapon law violations were up 14% due to an active increase in police presence and tenacity.

Police Chief Rick Elliott takes an aggressive approach to bring criminals to justice, as he stated in his 2020 address in the annual crime report.

He said, “Despite the challenges (of COVID), we were still able to achieve some of our top goals for 2020, including increasing the number of gang-related charges stemming from violent crimes, and a 36% increase in arrests for impaired driving.”

How Does Jonesboro Compare?