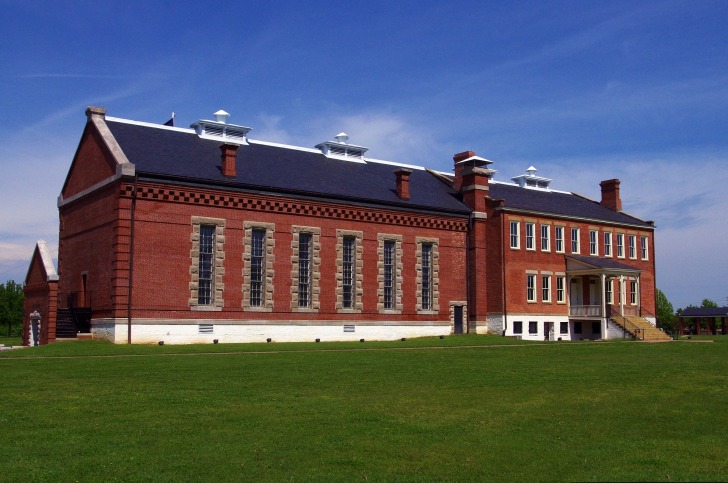 Fort Smith is a historically important town on the border of Arkansas and Oklahoma.

The town was established in the 1830s on the Arkansas River and was significant in the settling of the west.

It was a launching point for those going west and was important to the Trail of Tears when Indians were moved to Oklahoma.

Fort Smith is home to seven museums, including a barbershop museum and a trolley museum.

The city’s visitor’s bureau is in a famous brothel from the 1800s and is the only brothel on the national register of historical places.

Today Forth Smith has a vibrant arts scene with about 90,000 residents.

It is the largest city in western Arkansas and is a regional center for business and agriculture as well as a gateway to the Ozark Mountains National Forest.

Across the Arkansas River in Van Buren, another historic city.

There are a lot of natural areas to explore as well, with the Arkansas River running by the town, and a lot of wilderness areas.

Fort Smith has the lowest crime rate in the state, both for property crime and violent crime. Even so, the crime rate is well above the national average. Crime stats are a bit skewed when the population is relatively low, as it is in Fort Smith. One survey found 81 percent felt safe in their homes, and only four percent felt unsafe.

Taxis are available from the airport into town and throughout the city. There is also a bus system that is connected to a statewide bus network. There are very few reports of crime related to these services.

There are very few incidents involving pickpockets in Forth Smith. There are not a lot of crowded areas, which is where pickpockets like to operate.

Tornadoes are relatively common and dangerous in the spring. There have been some very destructive ones in the area. Flooding from the Arkansas River has also been an issue at times. Ice storms in winter can bring travel to a halt.

The violent crime rate is above the national average, but that crime happens mostly in specific areas. The downtown area, where all the attractions are, has very little of this type of crime.

Fort Smith is a small city in a rural area. This is not an area where terrorists are likely to strike. The threat of domestic terrorism from extremist groups is a concern, but so far there have been no incidents.

Scams targeting tourists are rare in Forth Smith. Most scams are aimed at residents, particularly the elderly, as there are attempts at identity theft. Most scams in the area happen online or over the phone.

There are some crimes against women in certain areas, mostly at night. In general, women are in no more danger than men when it comes to safety in Fort Smith. The downtown area is safe even at night for the most part. There was a larger than normal number of rapes last year according to police statistics.

The tap water is provided by the city and meets all federal and state standards. The water comes from two watersheds and is stored in Lake Forth Smith. There are almost no issues concerning water in Fort Smith.

The historic downtown area is 22 blocks of older buildings along the river where the town was first settled.

There are historical monuments, and seven museums relating to the history of the area.

All of these areas are very safe, and often not crowded.

There are several historic homes from the early to mid-1800s, such as the Clayton House, where there are many historical displays.

Some very old buildings and parts of the original fort from the early 1800s are at the Fort Smith National Historic site.

There are recreations of the site itself, as well as daily performances of historical events.

The River Valley Artisan Market is an area between the old town and the river where local artists of all kinds sell their art.

The riverfront has a large park for recreation.

There are trails, picnic tables, pavilions, and other items.

This area is very safe as well.

The Saint Scholastica Monastery is an active cloister of Franciscan Nuns.

The buildings are old and have interesting architecture.

The grounds are open all the time and worth a visit.

The building is open for tours occasionally.

Placess to Avoid in Fort Smith

The historical areas are very safe from a violent crime perspective, but the city has a high rate of property crime.

You have a one in 17 chance of being a burglary victim in Fort Smith.

Car thefts are also a problem in the city.

There is a lot more crime along the eastern edge than anywhere else in Fort Smith.

People who live there consider the southeast section to be the safest.

The crime rate is a little higher than average in the historical areas, even though most people consider those areas safe.

There are not as many people living there, so a few crimes make the crime rate seem worse than it is.

During the day those areas are safe, but at night there is a danger for people who are out alone.

The overall crime rate is 55 per 1,000 residents, which is significantly above the national average of 38.

The violent crime rate is 11.57, well below the national average, but the property crime rate of 55 is above.

The west side of town is an area to avoid.

It has the highest crime rate and there are no tourist attractions in this area.

So... How Safe Is Fort Smith Really?

Fort Smith is a little hard to describe from a safety standpoint.

During the day, the historical areas and the riverfront are very safe.

At night they are not quite as safe.

The western side is the most dangerous with the most violent crime.

Property crime is a bigger danger in this city, and that is true even in tourist areas.

It is the property crime rate that makes it much higher.

You have a one in 17 chance of being a property crime victim in Fort Smith.

Even though the violent crime rate is not all that high in Fort Smith, it is still twice the rate for the rest of the state.

That is almost three times the national average and well above the state average.

The city was also well above the national average for assaults.

Property crime, such as theft, was also more than twice the national average.

It is interesting that while the crime rate is relatively high, Fort Smith is often rated as one of the best places to live in the Midwest.

The cost of living is low, schools are ranked highly, and there is not a tremendous amount of poverty.

This may indicate that it is safe for the most part in some areas that are not as safe.

How Does Fort Smith Compare?