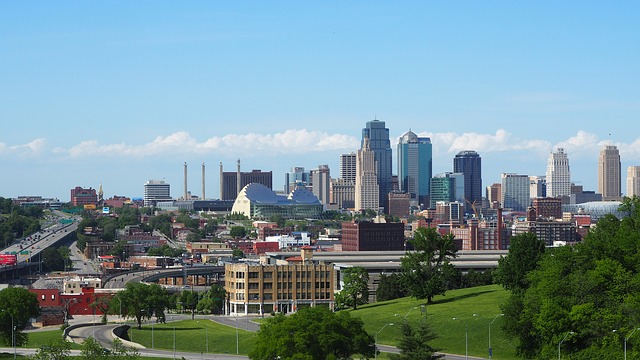 Kansas City, Missouri, is a twin city on the other side of the state line from Kansas City, Kansas.

The cities (and states) are split by the Missouri River, which forms the state boundary.

Without Kansas City, the world might never have known about the creative mind of Walt Disney.

An initiative called Thank You Walt Disney is underway to preserve the history and influence Kansas City had on the man who brought the world of Disney to our daily lives.

Here you can take part in the great American barbecue war, which is really just a personal preference, but we like to make a big deal about it.

Kansas City Barbecue is known for its signature sauce that is thick, sweet, and poured on meat that’s been dry-rubbed and slow-cooked.

It’s a style so popular that Kansas is known as the Barbecue Capital of the World.

On both sides of the state line, Midwestern values reign, and the Chiefs might as well be the best football team ever created.

I grew up across the state in St. Louis, so we’re sports rivals with KC.

It’s really important when visiting this area to make sure you know WHICH Kansas City is being referred to, so always look for the MO or KS after the address.

There's a medium to high risk in KCMO. The crime rates are exponentially higher than the national average based on recently released 2021 crime data. While there are pockets of the city to avoid and places that are safe, we'll investigate all the different options and statistics.

Ride KC offers fixed-route, express, and streetcars to get around the greater Kansas City region. It spans both states and offers easy routes no matter where you want to go. Taxis, rideshares, and rental cars are also available.

Of the 14,000 thefts in Kansas City in 2021, just 55 were pickpockets or purse snatchings. It's technically a low risk, but treat it as a medium risk because it's just too easy to get distracted and make yourself a potential target.

There's a medium risk here as KCMO gets storms throughout the year. Winter can be just as dangerous as summer, but there are also years you get mild seasons, and you'd never guess it's a disaster-prone area. You should also watch out for river flooding during periods of heavy rain.

The robbery rate is three times the national average, so there's another medium risk. Limit your exposure by not carrying around a large, dangling purse or wearing expensive jewelry.

It's a major metro area, so yeah, there's medium risk. There's also law enforcement presence with Homeland Security support on both sides of the river.

If you're looking to buy tickets to a sporting event, avoid buying them on third-party websites. I know you want a good deal, but a deal that is too good to be true usually is. You might even pay full price for tickets that aren't valid. Other than that, most scams are focused on residents.

Women have the same medium risk as men. The sexual assault rate is just more than twice the national average. This isn't a city to walk around alone at night, and you should always give your full attention to walking and situational awareness. Leave the headphones at the hotel.

The 2022 Water Quality Report shows full compliance with state and federal standards and gives in-depth explanations of where the water comes from and how it's treated. The only concern in this part of the country is lead in the water, which usually comes from aging pipes, not the treatment process.

VisitKC.com is the official tourism website for the region.

Note the word “region” because it includes KCMO, KCK, Johnson County, and all the other suburban cities.

If I get through this article without ordering BBQ, it will be a miracle.

While you really can’t go wrong with any barbecue, I’m going to avoid my own recommendations and let Kansas City Magazine take the blame/credit.

Their top three BBQ locations in KCMO (not a suburb or across state lines) are:

There’s an app called KC’s Barbecue Experience where you can see all the options available and earn badges along the way.

I can’t stress enough how much you should try the Burnt Ends at any place you visit.

You can find something for all your interests, from history to sports to art:

Country Club Plaza, referred to as “The Plaza,” is a midtown shopping and dining destination.

It combines a laid-back vibe with elegance seamlessly.

If you get a chance to be here for the Christmas lights, you won’t regret it.

While you have various restaurant options here, it’s a great place to try a Kansas City steak.

Crown Plaza downtown is outside the headquarters of Hallmark and gives that “Hallmark Movie” vibe.

It’s touted as a “City Within A City,” so this could be a good location for booking your hotel.

Visit the KC Film Office to schedule a Film History Tour or a Queer Eye for the Straight Guy Season 3 tour.

You’ll be amazed at how much Hollywood history is nestled here in the middle of the Midwest.

Places to Avoid in Kansas City

There are a lot of places that light up as high crime areas on crime distribution maps!

In general, east of Highway 71 and south of Independence Avenue are home to the highest crime rates.

Any neighborhood with Marlborough in the name should be avoided, Knoches Park too.

Swope Park is near the Zoo, but the neighborhood itself isn’t too safe.

Just go to the zoo and then leave the area on major streets or interstates.

There aren’t any crime rashes at the zoo, but be sure to lock the car door when you park.

I really can’t stress this one enough – know which Kansas City you are booking a hotel in and double-check before finalizing the purchase.

The Kansas City Marriott could be one of many locations on both sides of the state line.

So... How Safe Is Kansas City Really?

The violent crime rate is more than three and a half times the national average.

That’s enough to convince some people it’s REALLY not that safe.

Perspective is important, however.

As I mentioned, I’m from St. Louis, and I laugh when I think that Kansas City is “SO DANGEROUS.”

That’s not to make light of crime at all, it’s just that St. Louis is a pretty dangerous city (and larger).

KCMO and St. Louis are always near each other on the “Most Dangerous Cities” list.

You’re doing the right thing by researching this because I can’t tell you the awesome things you’d miss if you were scared off by crime numbers.

That’s enough to lower the risk for a tourist without making them nonchalant about the inherent risks.

30% of highway robberies are in public places, which lowers the risk of a person being robbed vs. a business.

On a somewhat positive note, the robbery rate is down 64% since five years ago, so there is progress being made.

You just have to see the forest through the trees.

Treat this city as you would any major metro area.

Stay in the entertainment districts and avoid dangerous neighborhoods.

It can be that easy, along with situational awareness, common sense, and standard safety practices.

How Does Kansas City Compare?