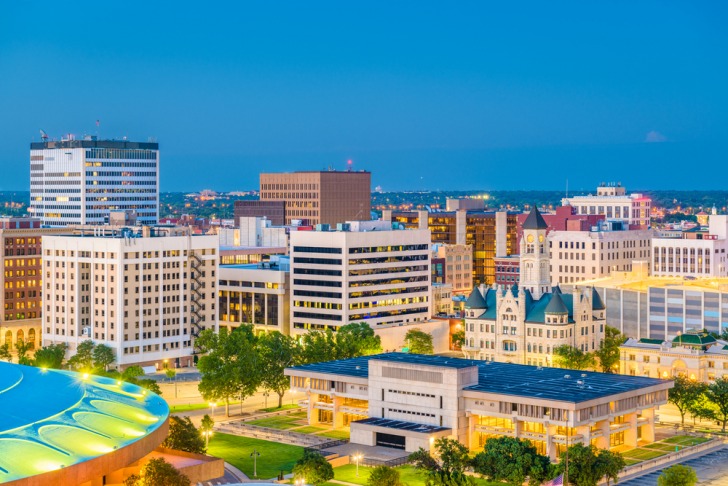 Kansas is a “flyover” state that has more to offer than you might imagine.

It’s true that there are millions of acres of wheat and a lot of wide-open empty spaces, but it is a very safe and relaxing place to travel.

Kansas is the heart of the “Old West,” and there is a lot of interesting history to explore.

The James Gang, Bonnie and Clyde, and other outlaws also called Kansas home at various times.

It has a little of everything, from Kansas City to very small towns, even ghost towns.

It is a big place and takes time to get around, but with some planning, you can find a lot of treasures out there in the prairie.

It's partly due to the wide-open spaces and space population, but there is very little danger in Kansas. The few big cities have typical big-city problems, but most of the state is rural and very peaceful. People are friendly and will help you out if you are in a jam. In a lot of small towns, there are people who will love showing you around and sharing history.

We say medium not because it is dangerous, but because there is not a lot of public transportation available. Buses exist in big cities and are not always clean. In rural areas, there is simply no public transport.  You would be better off renting a car.

In big cities, there may be some pickpockets around, but they are rare. There are panhandlers in places, and that can be a nuisance, but there is not much risk otherwise.

In the spring especially, there are tornadoes that can strike. Pay attention and heed warnings. Tornadoes are the biggest risk in the state, and they can happen with very little warning. Avoid being out in open areas on stormy days.

Outside of the major cities, mugging is virtually unheard of. Most smaller towns are safe any time of day. The bigger cities have safe areas for tourists, but there is a slight chance you could be mugged if you are out alone. Pay attention to your surroundings in larger cities and avoid being out at night alone. Avoid the inner cities of Kansas City and Wichita where there is a greater risk of being a crime victim.

We would go so far as to say there is no risk. It is not an area that has had any terrorism. The rural nature of the state makes terrorism hard to do. Terrorists are normally not interested in doing things that will affect only a few people.

Perhaps it is because of the rural nature of the state. Scams are relatively rare where there are not a lot of people. Some auto repair shops will scam you, claiming you need more repairs than you really do. Ask people where to take your car if you need a service.

Kansas is very safe in almost all areas. Cities can be dangerous, so don't be out alone at night, but other than that, there is very little risk.  It is not uncommon for a woman to travel alone in Kansas. Just be mindful of where you are and avoid taking unnecessary risks.

Safest Places to Visit in Kansas

Dodge City is a historic old western town that caters to tourists and is very safe.

The small towns are far apart at times, but many of them are worth a visit and are completely safe.

The eastern edge of the state has a lot of Civil War history and these are safe and interesting places as well.

The central part of the state has Amish and Mennonite settlements that are extremely safe and interesting places.

Placess to Avoid in Kansas

Kansas City is a very large city that straddles the state line of Kansas and Missouri.

Most of the city is in Missouri.

The Kansas side is a place of contrasts.

It has one of the highest crime rates in the nation overall.

Even so, there are areas like Overland Park and Olathe, which are very upscale, wealthy small cities that are very safe.

Wichita is another large city, and the inner city area can be dangerous with lots of muggings and robberies.

Crime rates have fallen in Wichita in recent years, but there are some areas in the inner city that are quite dangerous and should be avoided.

The western half of the state is very rural.

The danger here is rattlesnakes, and it may be literally 100 miles to the next gas station.

The greater danger in rural areas is being stranded on the side of the road.

If someone passes by, they will probably stop to help, but that may or may not happen for a long time.

Safety Tips for Traveling to Kansas

So... How Safe Is Kansas Really?

Kansas is an extremely safe place for travel.

With basic safety precautions, you should not have any difficulties.

The one caveat is the major cities in the state, which have the usual big-city crime issues.

In major cities, like Kansas City, there is a lot of crime, so you need to be careful there.

In the Kansas side of Kansas City, your chances of being a victim of a crime are one in 21, which is much higher than the national average.

Violent crime is also well above the national average.

Residents of Kansas City, Kansas, have a one in 63 chance of being a victim of violent crime.

By comparison, the chances are one in 199 on the Missouri side of the city.

Some areas of Wichita are not safe.

The central part of the city has areas with crime rates well above the national average.

The Murdoch area of central Wichita is much higher than the national average as far as crime, with a one in eight chance of being a crime victim there.

Even so, the crime rate has fallen in Wichita in recent years.

Apart from those two areas, the state is very safe.

Mid-sized to small towns have a very low crime rate.

Partly because there are not as many people, but rural areas have a very low crime rate.

Most crimes involve situations where people did not lock their cars.

There is very little violent crime in rural areas.

In small towns, people often do not even lock their houses and are completely safe walking around any time of day or night.

How Does Kansas Compare?