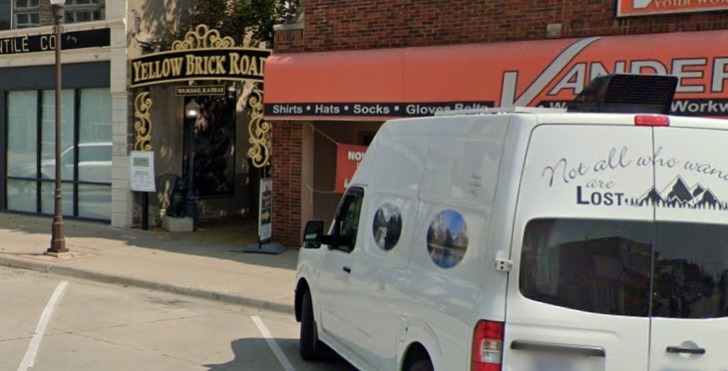 Wamego, Kansas, is one of the only places in the state where it makes sense to say “I have a feeling we’re not in Kansas anymore.”

This city brings Wizard of Oz fans from around the country and world to see one of the largest Oz artifacts and tributes in the museum and throughout the city.

Wamego sits nearly halfway between Topeka and the popular college town of Manhattan.

The Kansas River hugs the southern side of the city, so you’ve got the one thing here that Oz didn’t have – water activities.

At least it keeps the Wicked Witch of the West away.

In a cultural shift, there’s a dynamic Dutch Mill on the horizon here.

It’s a piece of history so important to the people of Wamego, the windmill was actually moved from a location north of town to the center of the city.

The historical footsteps of Wamego are almost overwhelming.

The Donner Party, on their doomed trip across the country, passed just north of here.

Laura Ingalls Wilder, of Little House on the Prairie fame, crossed this region on a move to Missouri.

This is also near a popular stopping spot on the Oregon Trail.

While playing the game, you can die of cholera (and goodness knows I did many times).

In Wamego, that tragedy is a reality at the Cholera Cemetery.

It’s hard to imagine all this history and fanfare existing in a small town of fewer than 5,000 people.

Wamego is definitely a city worth visiting and staying for a few days to explore.

There's a very low risk here if you go by 2020 crime data, which is the latest available. Of course, that was a pandemic year and some cities had unusually low or high crime rates that year. Wamego was very low. I dug back into the data from previous years to see trends instead of a one-year glance. While the city still had a low risk from 2017 through 2019, there were exponentially more crimes than in the ultra-safe 2020.

There isn't a public bus system aside from rides provided for people who need to go to the doctor or grocery store. Taxis and rideshares will be sparingly available, but having a car is ideal here. There's a low risk when driving in this area, but there's a medium risk it's going to be hard to get around without a car.

There's a low risk with no pickpockets reported since 2018 when there was one. It's easy in a tourist spot like this to lose your attention to safety. Don't let your guard down and bring as little as possible with you when visiting the tourist spots. Leave valuables at home.

Being this close to the Kansas River, there's a risk of flooding. Severe thunderstorms with intense lightning, hail and strong winds are possible, with springtime being the most active part of the storm season. Of course, Dorothy was swept to Oz by a tornado (she called it a cyclone, which means the same thing), and tornadoes are still a risk here. Winter also brings snow and ice storms with the occasional blizzard. This all adds up to medium risk.

Wamego hasn't had more than three robberies in a year since 2009. There's a low risk it will happen to you. All of the violent crimes reported here in 2020 were aggravated assaults that happened in homes or bars.

There's a low risk here as it's not a major population center or near a military base, which are two key indicators of a hard target for terrorists.

Even a major identified theft and fraud crime from 2019 was only targeted at local bank residents. All of the reported scams since then target locals, and not tourists. There's a low risk here, but just make sure when you buy tickets or merchandise that you're working with a reliable vendor. I lived in Las Vegas long before there were any costumed people walking up and down the Strip making money - and I was surprised when it started how the tourists fell for it. They would give money to people who were just random people in Halloween costumes trying to make a quick buck. It's easy to get immersed in an experience like Wamego, so just use common sense and you should be fine.

Women should feel as safe as Dorothy riding her bike. Well, that's a bad example. It is very safe here for women, with no sexual assaults reported back as far as 2009. There are plenty of safe spaces to visit and explore.

The water in Wamego is low risk with all standards met according to the 2021 Water Quality Report. You can feel safe using it for drinking, bathing, or dousing a wicked witch.

Safest Places to Visit in Wamego

The Oz Museum is open throughout the year, with shorter hours in the winter.

The museum has more than 2,000 Oz mementos and artifacts.

In the museum, you’ll learn a lot more than movie facts.

This display showcases a century of Oz fandom and fascination.

If you happen to be visiting during October, you’ll be there for OZtoberFest, which is a celebration of all things Oz.

Book your hotel and rental car as early as possible because the town fills up quickly.

Throughout the city, you’ll find a Yellow Brick Road that is great for a social media photo op.

There are also painted Toto’s all over town.

Different businesses put their own decorative spin on the sculptures and it’s hard to pick a favorite since they are all so elaborate.

The Oz Winery is a great place for wine lovers to get into the Oz spirit with specially-themed bottles and samples available.

Here you can also shop for cheese, meat, cigars, and chocolates.

The Wamego Historical Society Museum is more than a building with displays.

There’s a village resembling the 1800s life, complete with the county jail and a log cabin.

Car lovers need to go inside the Transportation Building.

I’m not going to spoil the surprise, but there’s a car in there that will blow your mind if you appreciate vintage vehicles.

Head north of town to see the Oregon Trail Nature Park and the Cholera Cemetery.

Head to the top of the hill and you’ll be rewarded with panoramic views of the Kansas River Valley.

Spring brings fields of wildflowers (but no poppies, sorry about that).

Just wait until you see the painted silos in the park as well.

As a travel safety journalist, I’m generally going to tell you all the reasons to avoid bison in the wild.

However, just outside Wamego, you can visit the Lazy Heart D Ranch and get a supervised tour where you’ll actually feed and/or pet a bison.

This tour also includes a trip to see where the windmill was originally located before it moved to the city.

Places to Avoid in Wamego

You can feel safe traveling around Wamego.

There aren’t any dangerous parts of town or bad neighborhoods.

Of course, it’s respectful and smart to stay on main roads and keep tourist traffic off the neighborhood streets.

Don’t go looking around for Dorothy Gale’s house from the Wizard of Oz.

In what seems weird planning, the actual replica of her house was built in Liberal, Kanas, which is five and a half hours southwest of Wamego.

Which city is better for Wizard of Oz fans?

“If I only had the nerve” to answer that.

Honestly, they are both unique experiences, but Wamego seems to own the Oz vibe throughout the city more than Liberal.

You really can’t go wrong with either city.

You should also avoid telling people you are going to Dorothy’s hometown in The Wizard of Oz.

You see, the movie never quite said WHICH Kansas location Dorothy was from – it was just said she was from Kansas.

So, the good people of Wamego decided on “Why Not Wamego?” as a marketing stint to take the creative liberty of making it her home.

In fact, the Kansas scenes in the movie weren’t even shot in Kansas.

Safety Tips for Traveling to Wamego

So... How Safe Is Wamego Really?

The 2020 pandemic really shut down most crime in this area.

There were no homicides, sexual assaults, robberies, or vehicle thefts.

There were just five violent crimes – all among people who knew each other – and four thefts.

It’s important to know that in the years prior to the pandemic, violent crime, robberies, and thefts were all at or near the national average.

It doesn’t mean the city isn’t safe for visitors now at all – it just means it’s not the crimeless place it appears to be from the most recent data.

How Does Wamego Compare?