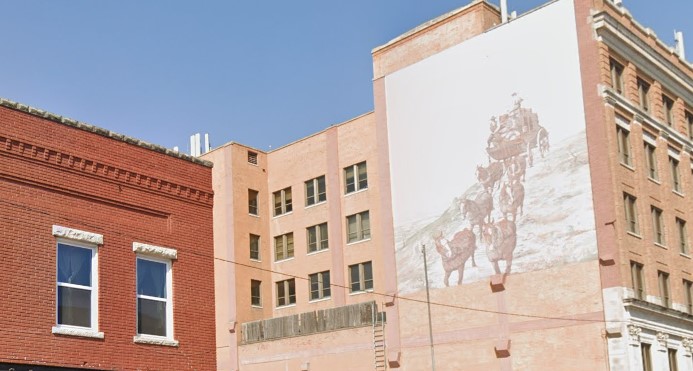 When Clark Griswold bellied up to the bar in 1983’s iconic movie National Lampoon’s Vacation and demanded “Hey knucklehead, set us up with four red eyes, will ya?”, he was in Dodge City, Kansas.

While that line of ordering drinks didn’t work out so well for Clark, Dodge City is the epitome of the Old West.

The city is also the setting for the TV series “Gunsmoke.”

If you’ve heard the phrase “Get out of Dodge!”, this is the Dodge to get out of.

However, before you go – stay a while.

There’s a lot more to do here than just the Old Western city, so plan to stay a spell and feel free to wear your cowboy hat and badge.

Dodge City was founded as a watering hole for thirsty soldiers at nearby Fort Dodge, a site you can still tour.

There’s a new casino resort with an entertainment complex.

Every August the city is filled to the brim with people attending Dodge City Days, a throwback to the history and culture of the Wild West complete with a rodeo.

Many of the tours here can be done self-guided or on a tour, including a trip to Fort Dodge, which is 10 minutes away.

There’s also a racetrack and farmer’s markets open throughout the year.

Dodge City even has its own zoo.

One of the benefits of a Dodge City vacation is that the attractions are flexible enough to be family-friendly, romantic getaways, or a wild weekend getaway.

While there are only reenactments of shootouts these days, the violent crime rate is a bit higher than the national average. You should visit here with appropriate caution any tourist hub would require. Because of some recent crime trends, and the percentage of crimes that happen against strangers, we're giving this a medium risk.

There's a low risk and plenty of options to get around Dodge City. Rental cars are widely available, as are taxis. There is a city bus system and a tourist trolley. Uber and Lyft also provide services here.

With four pickpockets or purse snatching reported in 2020, about 1/3 of the thefts were related to car break-ins. We're going to give this a medium risk, more for the potential for theft and not just based on the numbers. You really need to carry only what you need and carry as small of a purse and empty of a wallet as possible.

There's a medium risk because hazards exist throughout the year. Dodge City isn't quite as humid as the eastern part of Kansas, but it still gets thunderstorms and tornado potential. Dodge City is also known as one of the windiest cities in the country. Winter can bring the bitter cold with the sting of the wind chill, as well as snow, ice, and sleet.

Eight robberies were reported in 2020, which isn't a high risk. One note - when a robbery escalates to an assault, it's reported as only an assault. There were 349 assaults or battery cases in 2020 and 35 of those crimes were against strangers. In 2022, there was a trend of teenagers doing a social media challenge that required violence and criminal activity against others. Because of all the circumstances surrounding this category, there's medium risk.

There's a low risk here with a small population and rural area. Terrorists are prone to hit larger targets with a large population.

The biggest scam recently is targeting business owners and not tourists. There's always a concern about a rental scam if you choose to stay outside of a chain hotel. You should always ask for proof of a rental license and never have to wire money or purchase gift cards to secure a room.

The sexual assault rate here is almost twice the national average. It's a solid reminder to use caution when you're out by yourself or enjoying the nightlife here. Always stay in pairs and never go to a private place with someone you have just met. There's a medium risk because of the potential.

For several years now, Dodge City has had water quality that meets or exceeds the required standards. The 2021 Annual Water Quality Report shows no violations.

That moniker comes from the number of people who died and were buried here – with their boots on.

You can spin that however you want to the little kids that ask.

The Boot Hill Resort & Casino is one of the newest attractions in town.

It’s also far on the west side of town and away from the hustle and bustle of the main tourist corridor.

One bonus of staying here is a shuttle service to the airport and museum.

Boot Hill Museum is an iconic place in Dodge City.

This is so much more than a traditional museum.

During the summer, there are gunfight reenactments and other shows outside the museum.

Inside you can learn about the history of Dodge City, have some fresh sarsaparilla (similar to root beer), attend a dinner show, and have home-cooked meals.

The museum is open throughout the year, but summer is when there are more performances.

This is a great place to grab a snack or just sit and people-watch to rest your feet.

Don’t miss some of the unique stores and foods available here.

Farmer’s Markets are held here on Saturdays and the last Friday night of every month comes to live with live entertainment.

You can get a two-fer at the Gunfighters Wax Museum, which is connected to the Kansas Teachers’ Hall of Fame.

The wax museum has pictures of all your favorite and despised Western warriors.

Here you can have the ongoing discussion of – “Was Wyatt Earp a good guy? Or a bad guy?”

Stop by the Dodge City Visitor’s Center to pick up a map for a self-guided historical walking tour.

Make sure your camera is charged as there are a lot of photo ops along the way.

Fort Dodge offers a self-guided walking tour, but it’s important to note there are retired Kansas veterans living in the buildings.

There is a museum in the library and tourists are welcome to visit the fort as long as the sun is shining.

The Wright Park Zoo is home to more than 160 animals, including black bears, Longhorn cattle, cougars, and monkeys.

It’s also a free attraction, so save some money and tell the bears that I said “Hello!”

There are so many more attractions to explore.

You can go to VisitDodgeCity.org to get a more abundant list of things to do, how to get around, and itineraries for everything from motorcyclists to pet-friendly stops.

Places to Avoid in Dodge City

The highest crime area is in the tourist section, which isn’t surprising.

With the close quarters of visitors and so many distractions, there are bound to be more crimes of opportunity.

There isn’t a neighborhood or part of town that’s too dangerous to visit, and you certainly don’t need to “Get Outta Dodge” to find a place to stay.

You should stick to the main roads and avoid cutting through neighborhoods – for your safety and the respect of the people who live there.

The Dodge City Gift Shop has a lot of specialty items and souvenirs, including a Cow Pie of fudge.

There are also toy guns for sale, similar to the guns of the Old West.

With the number of gun crimes happening in Kansas and nationwide, it might be a good idea to choose another item for children to pique their imagination.

It’s just a suggestion to think about, not a stance on gun rights.

Normally I wouldn’t touch on the controversial topic of guns, but I want to dive a little deeper into the recent violent crime trend reported in May of 2022.

This stems from a “Challenge List” of things to complete, all of which are illegal.

The Dodge City Police detailed some of the crimes reported or seen on the list, “Many tasks involve committing crimes such as a battery, disorderly conduct, criminal damage to property, theft, lewd/lascivious behavior, reckless driving, drug possession, minor in possession/consumption of alcohol, criminal trespass, kidnapping, hosting minors consuming alcohol, conspiracy to commit, interference with law enforcement, promoting obscenity to minors and various dangerous traffic violations that could easily take a life or end yours.”

One of the victims was jogging when a truck full of people came and she was hit by something.

Turns out, eggs were thrown at her and she was able to get the license plate number.

The Dodge City Police issued this warning, “To our innocent citizens, be advised that most of these criminal acts are to be done to unsuspecting strangers just like the 26-year-old woman out jogging.

Please be aware of your surroundings and stay safe out there.”

So... How Safe Is Dodge City Really?

In the past decade, the average for assault and battery crimes is around 386 per year.

I’ve looked at hundreds of crime data reports in the past six months, and I can tell you one thing that stands out in Dodge City – Half of the violent crimes happened in private homes while the other half happened in public places.

It’s very rare that so many of the crimes aren’t domestic in nature.

Also, 30% of the violent crimes were against strangers.

That’s another high percentage – generally, that number is closer to 5-10% of all violent crimes.

The theft rate dropped 64% from 2020 to 2021, which is surprising there weren’t fewer thefts during the year that was the height of the pandemic.

Dodge City is a really fun place to visit, but you do have to pay attention to your surroundings and use city-slicker crime prevention tactics.

How Does Dodge City Compare?