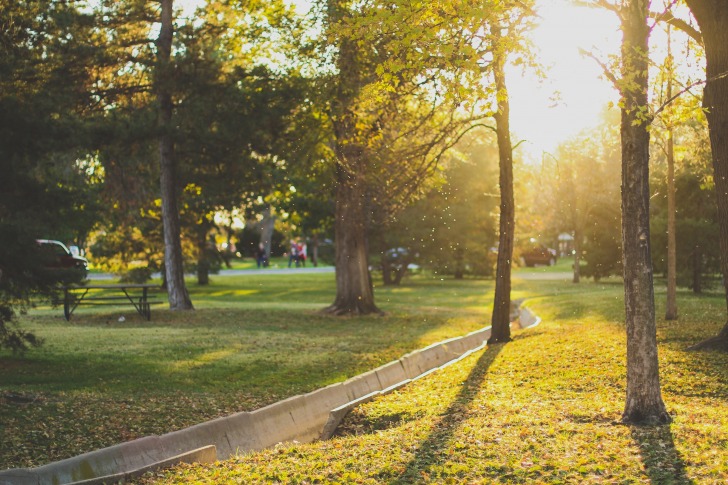 Overland Park is next to Kansas City, and the second most populated city in the state with just under 200,000 people.

It is a gateway to Kansas City but has a lot going on itself.

Much of it is an upscale area with shopping areas and a big nightlife scene.

There were 21,000 people in Overland Park when it was incorporated.

It has 70 parks, a large arboretum, and a botanical garden, and its soccer complex is among the best in the nation.

Overland Park is often named one of the top 50 cities in the nation to live in because of its relatively low crime rate and cost of living.

The downtown area is not old, but it has a clock tower and is a great place for walking around, with more than 300 shops.

Some say Overland Park is an upper-class suburb of Kansas City. It has a lot of high-tech businesses and a large professional population. Its crime rate is below national and state averages, and much lower than nearby Kansas City. Most residents feel safe in Overland Park, and there are very few high-crime areas in the city. It manages to have a small-town feel even in a very urban environment.

There are taxis, and there is a bus system that goes throughout the city and into Kansas City. There are very few problems reported. Still, it is probably better to rent a car if you want to have complete freedom to travel while there. Taxis are metered and licensed. Some drivers may try to take a longer route if they know you are a tourist.

There are a lot of public areas, and they can get crowded. That is the type of environment pickpockets like, but that crime is not as popular as it used to be. Even so, it is a good idea to keep your valuables, and cash, in a safe place where they cannot easily be lifted from your pocket.

There can be tornadoes in the spring and early summer, and they can be very destructive. They have not happened often in Overland Park, but they have in surrounding areas. Snow and ice can get heavy in winter and cause traffic problems. The area is not conducive to earthquakes, and there has been very little flooding in the area.

The crime rate is below average and there have not been a lot of muggings reported. There are some questionable areas though that you should not go into alone at night. The risk is not that great, but there is no need to put yourself in a position where the risk could arise.

A decade or so ago, a Nazi killed some Jewish people, but other than that, there has been no terrorism in the Overland Park area. The Kansas City area would be a more likely target for terrorists. Domestic terrorism has become a concern in recent years with extremist groups, but there have been no incidents.

A cab driver might take the long route, or a hotel may overbook, but other than that there are few scams you will run into on the streets. Most scams are online these days and are targeting elderly people. Crime is relatively low here, but it is still not a good idea to do business with a random person on the street.

Women travelers are common, and it is common to see women traveling alone. Women are safe for the most part. The crime of rape is at the state and national average, while all other crimes are below average. There is a bit of risk because of that. Avoid getting into situations where you could become a victim.

The safest areas are the public areas like the Botanical Gardens and Arboretum.

Tourist attraction areas are very safe in the city.

There are a lot of upscale hotels in the middle and northern sections that are very safe.

The southwest and northern areas are the best areas to live in, and the safest according to residents.

There are large shopping areas in the downtown area, and these are very safe as well.

Most people do not live there, so very much crime at all will push the crime rate up.

Unlike many cities of this size, the downtown area is very safe and oriented towards tourists and visitors.

Places to Avoid in Overland Park

There is more crime committed in the southeast section of Overland Park than anywhere else, and even there it is not overly bad, with about 650 per year.

The areas along the Interstates where there are cheap hotels also have some crime areas.

Roeland Park, and Shawnee Mission, on the edges of the city, are somewhat bad, but not considered dangerous.

Most of the city is safe.

Most crime is a matter of opportunity when a property is left unprotected.

The greater danger in Overland Park is someone taking advantage of an unlocked door, more than a specific area.

So... How Safe Is Overland Park Really?

Overland Park is very safe for tourists, but it is still a good idea to keep your eyes open and to stay out of potentially dangerous situations.

It is a bit unusual, but the property crime rate is almost the same as the violent crime rate.

The property crime rate has declined by 50 points since 2004, while the national rate has gone down by 140.

It has gone down to about 50 now but is still double the national average.

This could be because of awareness and more reporting, so it isn’t known if the actual number has increased.

The number of assaults, in general, is also above the national average, but the city is not above any other crime category.

Crime stats are one thing, but the level of safety residents feel is a better indicator.

In one community survey, 98 percent of residents felt safe in their own homes, and 91 percent were satisfied with the quality of police and fire protection.

Seventy-four percent said it was a good place to visit, but the lower number was not attributed to safety.

How Does Overland Park Compare?