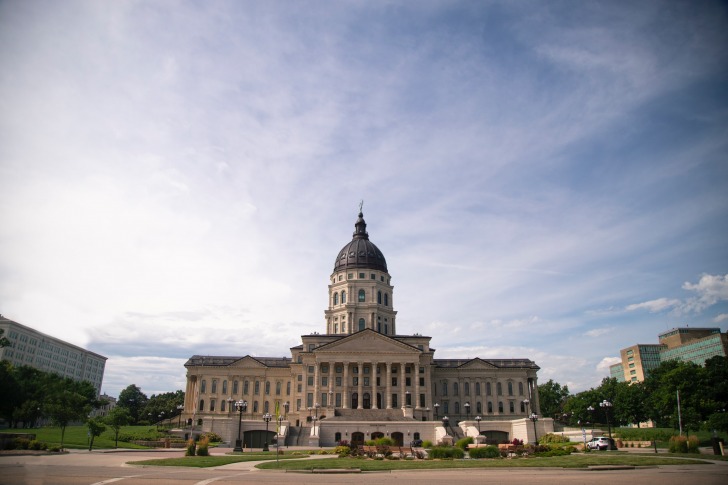 Topeka is the state capital of Kansas and an hour from Kansas City.

The northeast part of Kansas is fairly densely settled, and nothing like the endless amber waves of grain the rest of the state has.

Topeka is also close to the state’s two main universities.

The area has a lot of history concerning the pre-Civil War era.

The area was also the first railroad point for the great cattle drives of the 1800s, and it played a key role in the settlement of the West.

It was also part of the civil rights movement with history there to explore as well.

There are a lot of fun things to do in Topeka, and it is a good base for exploring the northeast section of Kansas.

There is the state capitol building, as well as many historical buildings and museums around the city.

There are several airports in the area, and you might be arriving in Kansas City. There are taxis and buses available to Topeka from any area airport. They are also available in town. It's fairly easy to get around Topeka, and it is safe. Taxis are licensed, and there are very few reports of problems.

There might be a few in crowded areas like bus stops, but in general, they are rare here. This type of crime is not as popular as it used to be because cards are harder to use and are more secure. This is not a common issue in Topeka.

There are tornadoes at times in the spring that can be dangerous. There can also be heavy snowfall in the winter, but this is normally handled by the city. The area is not conducive to earthquakes or flooding. Nature can throw some curves, but it is usually more of an inconvenience than a disaster.

There are some areas of Topeka that are not safe, and your risk of being mugged would go up sharply. Some areas around the capital complex are not totally safe. Even so, there are a lot of tourist areas, or main traffic areas, where there is very little risk of being mugged. Much of the city is safe, but it is still not a good idea to be out at night alone.

A city with a state capitol and a fairly large population might be a good target for terrorists, but so far, at least Topeka has not seen any terrorism. There is some concern about domestic terrorism from extremist groups, but there have not been any incidents.

Most scams are online and focus on the elderly, stealing their identity and bank accounts. There might be the occasional fake taxi or fake tour operator, but they are not common in Topeka. Sometimes, hotels overbook and try to send you to a cheaper place at a higher price.

Northeast Kansas is very progressive. Women traveling even long is common and does not get much attention. It is still not a good idea to be out on the streets after dark by yourself, but with a little common sense, women are safe in Topeka.

The city provides water from area lakes and deep underground wells. There have been no issues reported with the water quality in Topeka. The tap water is safe.

Safest Places to Visit in Topeka

The state capital complex is an interesting site with a classic type capital building.

It has famous murals that cover entire walls, statues, and you can go to the upper dome.

The Brown v Board of Education historical site is nearby and marks the Supreme Court decision that ended school segregation.

Old prairie town is a historic interactive park that has a large mansion that is also a historical site.

The city has several museums and a large botanical garden.

The old town area, a few blocks from the capital, is also safe.

Residents say the southwest area of town is the safest.

In the southwest, you have a one in 48 chance of being a crime victim.

There are several trails and bike paths in the city, as well as some along the Kansas River past the north side of town.

These tourist areas are very safe even at night.

The southeast part of town is widely regarded as the worst area.

Places to Avoid in Topeka

Topeka has one of the highest crime rates in the state, well above the state and national average.

The central part of the city, around downtown, has a lot of crime at night but is safe in the daytime.

This area has more drugs and prostitution than other areas of the city.

The east side, as well as some of the middle-north areas, have a lot of violent crime and those are areas that have a lot of poverty as well.

There is some gang activity, and a lot of drug activity, in the central areas of the city.

These are small areas that should be avoided even in the daytime.

The east side of the city has a reputation for gang activity and violent crimes even during the day.

The south side has a lot of poverty and tends to have a lot of property crime.

Safety Tips for Traveling to Topeka

So... How Safe Is Topeka Really?

Topeka has a reputation as a city of high crime, but there are a lot of people that enjoy Topeka and feel safe.

The city has the second-highest property crime rate and the fourth-highest violent crime rate in the state.

There are a lot of statistics out there, but there is a general agreement that crime is a big problem.

Some rate Topeka in the top five percent for being dangerous for a city its size in the nation, while others put that at about 25 percent.

The south side is the most dangerous with a one in eight chance of being a crime victim.

That falls to one in 47 on the west side.

Property crime is even worse.

Of the violent crimes, robbery is the worst statistically, with 193 per 100,000, while the national average is 73.

Topeka is above the national average in murder, rape, and assault as well.

Property crimes are even worse.

Topeka is not that large of a city, at 127,000, but it has the problems of much larger cities.

There is a crime problem but the tourist areas are safe during the daytime.

How Does Topeka Compare?