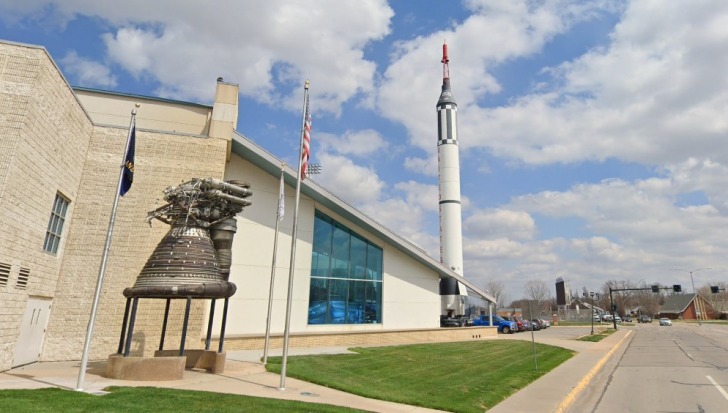 Smack dab in the center of Kansas, you can take a virtual adventure into space and go underground into a salt mine, all in one city.

That city is Hutchinson, Kansas.

The city is nicknamed “Salt City” because of the rich salt mining history-turned-tourist-attraction, but you’ll hear people there refer to it as Hutch.

The city is home to 40,000 people and is just an hour northwest of Wichita and more than three hours west of Kansas City.

Before you are done reading this story, you’ll have a new appreciation for salt.

Especially if you are a movie buff.

Things like set pieces from the Star Wars franchise, the entire collection of MASH television shows, and silent movies on film from the 1920s.

There are hundreds of priceless Hollywood moments stored 60 stories below the surface of the Hutchinson earth.

The salt in those mines is so abundant that it could take care of salting slick winter roads across America for 250,000 thousand years or so.

The depth of the mine is so impressive that you could fit the tallest building in Kansas in the mine three times over.

Now the bad news – you’re going to have to take my word for it because there aren’t tours of Ben Hur or the Wizard of Oz sets.

You can tour the mines, but Hollywood, even underground, is in its own VIP room.

Hutchinson police get salty about their crime numbers. They didn't provide any data for 2021 and in 2020 only 5 months of crime data were reported. So, we got creative with the numbers. We took the number of crimes in each category and divided it by five, for the 5 months of crime reporting. The result of that equation was then multiplied by 12 to get a yearly average. It's not a perfect science, but it's the best with the limited information Hutchinson Police offers its residents and visitors. Because of the incomplete data, we have to give the city a medium overall risk to err on the side of caution.

Hutchinson is in Reno County and Reno County Area Transit (RCAT) provides public bus transportation here on fixed routes throughout the city. There is a direct route to the bigger city of Wichita and special busses that run snow routes in the winter. Taxis and rideshares are also available. Having your own car is going to be a big plus here.

The theft risk here is medium, with a one in 39 chance of being a victim. That's almost twice the national average. However, that does include everything from shoplifting to petty theft to car break-ins. Pickpocketing is generally not the biggest crime in the theft category, but take all the necessary precautions as you would in a big city.

Search for "Hutchinson Kansas Tornado" on YouTube and you'll see why there is a medium risk in this city. We'd give it that ranking for the tornado threat alone, but there are also the accompanying severe thunderstorms, wicked winds, frequent lightning, torrential rain, and hail that come with those systems. Winter can bring snowstorms, ice storms, and sleet.

The robbery rate is almost three times less than the national average here, so you should feel safe that there's a low risk. That doesn't mean letting your guard down. Keep in mind the date we have is a rough estimate from 2020, so it's as outdated as it is rounded up to a yearly average.

There's a low risk here, as it's a small city without too many things that would make a sweet target for terrorists. Even if they wanted to target the Hollywood stash, it's hard to figure out how to attack something so deep in the earth.

As long as you know the Reno County Sheriff's Department will never call you and demand payment to avoid jail time, you should have a low risk while visiting here. There aren't any known scams targeting tourists.

The sexual assault rate is a little concerning, with 10 rapes happening in the five months reported, making an average of 24 per year. That's two per month. However, if you use common sense and avoid the common risks like walking around at night alone, you should have a low risk while you're here.

There were no violations in 2021 according to the Annual Water Quality Report and there are no water health effect notices or warnings. You can enjoy a low risk when using tap water in Hutchinson.

Safest Places to Visit in Hutchinson

Strataca is an underground salt museum that is open to tourists.

The tour lasts two hours and takes you 650 feet below earth on a 90-second elevator ride.

There are two levels of ticket options.

One is the regular salt mine tour and the add-on is a salt safari to more rarely seen portions of the mine.

Strataca is closed on Mondays.

Back on earth, you can take a look into outer space at the Cosmosphere.

There are five attractions to enjoy here if you buy the All-Access Mission Pass to this space museum.

The museum here holds the largest collection of Russian and the United States space artifacts anywhere, even more than the U.S. Space and Rocket Center in Huntsville.

If you visit both the mine and the space museum, you can get $5 off admission to one of the locations.

The Hutchison Zoo might seem boring at first glance after those two attractions, but even this place has some unique twists.

In addition to traditional zoo animals, there’s a dinosaur dig area where you can look for fossils.

You can also get a unique view of the prairie dogs through clear plastic bubbles that pop up in their enclosure.

For a more wilderness-type experience, head to the Dillon Nature Center.

There’s a playground for kids exploring all five senses, and a lake for fishing and canoeing.

The zoo might have all the animals, but the Dillion Nature Center has all the cool plants and flowers.

This 1,100-acre park has trails for people and horses while offering views of wildlife, sand dunes, ponds, grassland, and prairie.

You can also camp here.

It’s a great place to see the stars at night without any light pollution from the city.

Places to Avoid in Hutchinson

The city center and the historic district east of there are the highest crime incidents neighborhoods.

The west side of the city is safer than the east side when you look at the crime distribution map alone.

Don’t go trying to find the secret tunnels to get to the underground storage of Hollywood.

Even the crew of Ocean’s Eleven couldn’t break into this vault of priceless products.

Safety Tips for Traveling to Hutchinson

So... How Safe Is Hutchinson Really?

When we can’t provide exact data, like with Hutch, we have to use the best reasoning and averaging skills to make an educated guess.

We also don’t have data on what crimes were domestic issues and which were random acts of violence.

I reviewed the past year of Facebook posts by the police department and the main crimes reported were shoplifting.

You can see how much community engagement in policing there is here with the posts that say “THANK YOU FACEBOOK” updated from the original “Can You Identify This Person?” post.

There are also a good number of drug crimes reported.

It’s important to park the car with the doors locked and windows rolled up.

Leave nothing in plain sight.

Thieves will randomly walk through a parking lot and test the door handles, going for unlocked cars first.

Having an anti-theft device on the steering wheel can also dissuade thieves.

If you practice these kinds of good personal safety steps, you should enjoy your time in and below Hutchinson, Kansas.

How Does Hutchinson Compare?