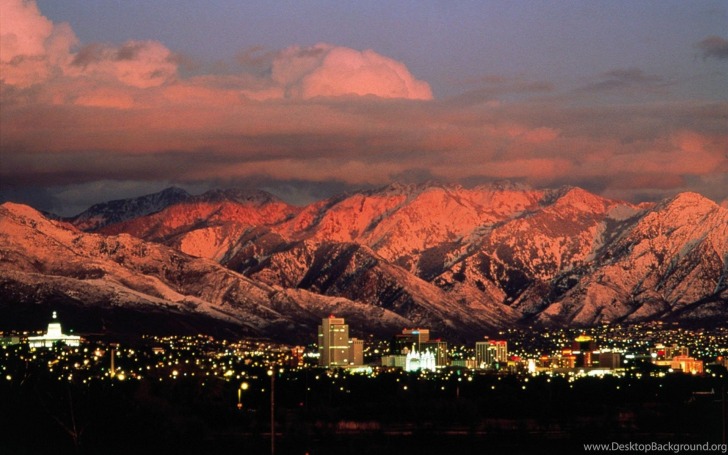 Salt Lake City, Utah, is an urban adventure with wilderness in all directions, including a geological feature that can’t be found anywhere else on earth.

The city is just to the east of the Great Salt Lake.

The wording can be a little confusing here, as Salt Lake can be confused with the actual lake or the region.

You can also refer to the city as SLC.

The map layout can also lead to confusion, as many street names are numbers, but once you know what the numbers mean, it’s a bit easier to navigate.

We’ll talk about that in a little bit.

Salt Lake City was founded by Mormons, led by Brigham Young, searching for a place to worship freely.

What was once a desolate high desert between mountains and a massive salt flat feature is now a large metro area with more than 1.2 million people.

The lure of the outdoors is strong here and even brought the 2002 Winter Olympics to the region.

SLC is also a major transportation and distribution hub, being the only large city for hundreds of miles and surrounded by wilderness on all sides.

There's a strong medium risk in Salt Lake City, with exceptionally high crime rates for both violent and property crimes. Honestly, the only reason I'm not giving this a high risk is because of how centered the crime is on a specific part of the city. While its reputation is one of religion and conservatism, it's important to know there's a very dangerous element lurking on the streets between temples.

An extensive public transportation system is available to get through the city, the nearby suburbs, and even some distant counties. Seasonally, you can hop a shuttle to Park City for skiing. There are bus routes and a light rail. Taxis and rideshares are available, but having a rental car is a great way to see all the region offers on your own schedule.

Theft rates are three and a half times higher here than the national average, but just 140 of the 10,000 thefts were pickpockets or purse snatchings. You should still be cautious and limit what you carry to the bare essentials. This is especially important for entering and exiting public transportation vehicles.

Wildfires and winter weather are the biggest concerns here, but the warm months can also bring severe thunderstorms and the occasional tornado. You can review the emergency management safety plan on the city's website to learn more information about how to handle each incident. There's an earthquake risk too, but they don't have any kind of warning ahead of time.

The robbery rate is almost three times the national average, and the majority of the robberies happen on streets, parking areas, or businesses. 30% of the robberies are classified as "highway robbery," which means the robbery of an individual on a public street. With just 25% of crimes happening against strangers, it's not an overly concerning statistic, but you should still be very cautious when you're out after dark or in certain parts of the city (we'll go through those bad parts of town shortly.)

With SLC being the capital city and the largest in Utah, there's a medium risk. It's not something to be too concerned about, as there's a strong law enforcement presence and federal government oversight happening behind the scenes. The local crime levels are much more concerning.

SLC gets a lot of spoofing calls and phishing emails, plus romance scams are prominent, but those mostly focus on local people. You don't have to worry about any tourist-specific scams. There are many homeless people here, so prepare to be panhandled at some point.

Statistically, women have a slightly less chance of being a victim of a crime, yet the sexual assault rate is four times the national average. Utah has long struggled with sexual assault levels, dating back to the early 90s. Only a small percentage are crimes against strangers, but the vast majority are "acquaintances." Don't meet someone from a dating app and go to a private place, and always let someone know where you'll be going and when you plan to be back if you are going on a date during your visit.

The 2022 Water Quality Report shows full compliance and no violations. If you have questions about drinking water closer to your visit, call (801)483-6765.

VisitSaltLake.com is the official tourism site, which is the best choice when researching a city since it provides a safe cyber environment and a lot of information beyond basic tourist attractions.

We also have extensive coverage of the SLC suburbs on this website, so you can review the neighboring cities to get more information based on the latest crime data at the time of publication.

The Salt Lake Connect Pass is a good starter purchase if it’s your first time here.

You can get discounts on multiple attractions across the entire region, and 18 attractions are included in the options.

These passes are not refundable, so be certain you want to make this purchase.

This Is The Place Heritage Park (yes, that’s the full name) is a throwback to the founding days of SLC, and visitors can experience life as if they were pioneers or even explore the Native American Village.

It is open throughout the year, but some of the attractions are seasonal.

Where else would you pay money to do chores in the name of fun?

This is a theme park with educational and exciting activities that teach you a lot about Utah along the way.

Red Butte Gardens is on the campus of the University of Utah.

Half a million or more blooms seasonally sprout, and you can participate in educational programs to learn more.

There’s a walking trail through the gardens and plenty of places to sit and simply take in the beauty.

Utah’s Hogle Zoo is in SLC, and it has a look at animals from around the world.

As I write this, there’s a promotion for Thanksgiving Day when they’ll feed giant pumpkins to the elephants.

You can also sign up for Animal Connections and get up close to a rhinoceros or giraffe.

It might sound weird to say, “Go to city hall!” but I promise – this one will blow you away by its sheer size.

The City & County Building looks more like a castle than a government building, but it’s definitely worth an Instagram photo or two.

The Great Salt Lake is usually on every tourist’s agenda.

You can drive about 20 minutes west to get to Great Salt Lake Park.

You can buy your entrance ticket online, but do it on the day you plan to visit.

All ticket purchases are only valid for the day of purchase.

Antelope Island State Park is a really cool spot to enjoy the lake and its unique environment, but it’s about a 100-mile drive to get there because it’s rather remote.

Here, massive bison roam while millions of birds nest or make a stop.

Antelope Island is also one of the best stargazing locations in the country and is part of the International Dark Sky Association.

The Wasatch Mountains are just to the east, with outdoor options throughout the year and some great hiking and skiing opportunities.

The popular Park City, near the site of the Olympics and home to incredible ski runs, is about an hour away.

Seasonally, traffic can be a beast, and that time could double.

At the center of town is Temple Square.

If you aren’t familiar with the Church of Jesus Christ of Latter-Day Saints (Mormons), then you should know they make some of the most incredible temples.

You can’t go into the temple if you aren’t a Mormon, but tours are available here for the other parts of the worship center.

There are movies to learn about the Mormon religion and expansion into Utah.

There are certain parts of Salt Lake City with so much crime that the police department actually devised a Crime Control Plan to address the hot spots.

You can read that report on the department’s website, but the “hot spot divisions” for crime in Salt Lake City that are getting extra focus are:

Since the implementation of the plan, police say the crime rates have gone down in these areas.

The unfortunate part is that these areas are surrounding or near Temple Square, where a lot of people visit.

Many of the crimes aren’t against strangers, and petty theft is more likely for a tourist than a violent crime.

However, you do need to use caution in areas with a lot of homeless people or suspicious characters.

Just because the area is known for its religion doesn’t mean gangs aren’t present here.

Many streets have numbers for names.

Those numbers directly correlate to how close the street is to Temple Square.

So 200 North is just two blocks north of Temple Square.

So... How Safe Is Salt Lake City Really?

Much of how dangerous you see Salt Lake City as depends on where you are from and how much crime you are regularly exposed to in your hometown.

There is a sense of “You think this city is dangerous?

You should see…” from people who moved here from other places.

That said, crime statistics can be worrisome.

The police chief says there’s a very small number of people who are responsible for a certain amount of the concerning crime.

According to the official 2021 crime data:

You do need to use caution in the area around Temple Square, where homeless camps are set up, and some repeat offenders live.

You should also get comfortable with the city’s layout and street numbering system.

It’s easy to get turned around there.

I drove through one time and stopped to get gas.

I think I drove around in circles for 30 minutes before I figured out the numbering system.

Winter weather can be dangerous, too, especially if you aren’t used to having a lot of snow or mountain communities where the elevation can quickly make a regular snowstorm into a blizzard.

There is plenty of safety and preparation information on the emergency management website to help you out.

How Does Salt Lake City Compare?